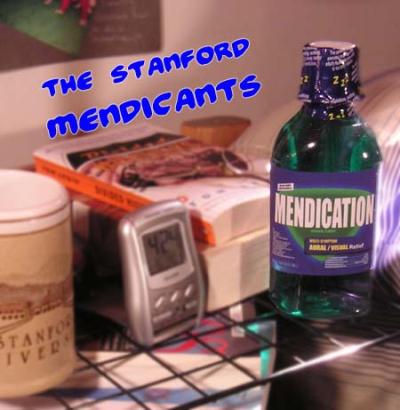 The Stanford Mendicants have their formula down-pat: infectious energy, a cast-of-thousands belting back up sound, and jump around the room soloists — all delivering mostly pop rock classics. Songs like What I Like About You Baby, Now That I Found You and Wake Me Up, Before You Go Go seem to best respond to The Mendicants' strengths. However, the heavy-handed arranging choices (dated, over-enunciated syllables and predictable block chords) just feel awkward during the ballads and, surprisingly, a few upbeat songs like Be My Yoko Ono and Lover's Question. (The same is true for I'll Do Anything and Careful, but the leads' soulful deliveries seem unaffected by their square accompaniments. That pulls the scores back up a bit.)

One binding force between these disparate elements is the steady hand and attentive ears of producer-engineer, Bill Hare. His apparent motto for Mendication was "always enhance, never distract". This album is a virtual lesson in when and how to add doubling/sweetening to leads. Any changes would be a matter of taste. I would have preferred a few more "tricked-out" percussion sounds, especially in the genre of believable crashes. But the average listener might not feel that way at all, preferring the nearly live quality of the percussion.

One track every listener will love is Wake Me Up, Before You Go Go Did George Michael actually make a guest appearance? Only The Mendicants know for sure. Either way, I dare you not to dance to this one. Where'd I put my oversized, sleeves-rolled-up suit jacket, skinny red leather tie and parachute pants anyway?

Mendication is a fun listen, with a few absolute gems. My advice: buy it and skip the low-rated tracks. The good stuff is worth it.

That's the sound I made most often when listening to the Stanford Mendicants' new album Mendication. They've embraced what they do best and produced a solid album that is a very enjoyable listen, the best of their three albums that I've reviewed.

In the past The Mendicants were plagued by issues not atypical for groups that have been around for 20+ years (most of which had to re-learn their approach to collegiate a cappella to adapt to a "modern" sound). Their singing shaded towards the overly "pure"; their arrangements were a bit stale, or perhaps just too straightforward; and their choice of repertoire was an eclectic mix that could be boring one minute and bizarre the next.

On the positive front, The Mendicants have always had first-rate singers who combine into a nice ensemble sound and perform with great energy. And this time around, a mixture of a little old blood (Mike Ybarra) and a good deal of newer, younger blood (Sudeep Roy, Aaron Baca, Chris Babson, Matt Smith, Stephen Ensley et al.) has, for the most part, furnished The ‘Cants with a batch of tight, generally interesting arrangements that let the group shine in new ways. Good song choices are also key and the guys have clearly come to understand that their forte is more mainstream, vanilla-flavored material — nothing to be ashamed of. I'll take top-notch Four Tops, Romantics, Beatles and even Wham! (all of which can be found on this album), over second-rate Linkin Park or Hoobastank any day. And of course, there's Bill Hare, long-time Mendicants engineer, whose finesse is really the icing on the cake for this album. Bill has often said that so much of what he can do for an album is decided long before the material gets to him, and in this case it feels as though The Mendicants finally gave Bill performances, arrangements, and an overall sound which he could truly sink his teeth into, and the results are — unsurprisingly — terrific.

A few particular shout-outs: special kudos are due to Chris Babson for his energy on "I Can't Help Myself" and Matt Smith for Wake Me Up, Before You Go Go, a song that I dreaded when I saw it on the track list and found myself thoroughly enjoying when it finally came up. Similar accolades for Martin Reyes for a wonderfully energetic arrangement of What I Like About You and for Mike Ybarra for his arrangement of the Wham! classic (geez, I think this is the most I've ever talked about Wham! and the nicest I've ever been in doing so). And once again, "big-up" to Bill Hare, for some fabulous work with the vocal percussion and for the overdriven guitar/harmonica thingie in What I Like About You, for the wood block in Sugar Pie, Honey Bunch, for the "cheek" percussion in Be My Yoko Ono and for the Hammond organ at the top of, yes, you guessed it, that dang Wham! song again.

Are there still a few little things the group can work on? Sure. The tuning in the upper male voices, especially in the faster moving parts, can be a bit suspect at times. The original material, while ambitious, is relatively weak and there are a few missteps in the choice of covers (Be My Yoko Ono and I'll Do Anything). More arrangement development would still be welcome — the group's arrangers have put together some nifty "riffs", but they've placed them right up front rather than building to them, so the songs sometimes have nowhere to go. But these are truly minor issues and ones which, while ever-present before, have been kept to a minimum here. This disc is a solid effort and a solid addition to your CD collection.

The all-male Stanford Mendicants deliver decent results on Mendication, their fourth album. Seeming to take many of my suggestions from last time, this disc shows much progress but also much still to be done.

The thing most irking me about Best Laid Plans was its inconsistency. Here this problem is solved with an album that rocks pretty much from start to finish. I think they finish up with three of their weakest tracks, but the artistry is more consistent throughout.

The best thing about the Mendicants is their energy. It's intense, with singers holding nothing back. This feeling of intensity is furthered by their fast-paced and never boring arrangements. However, I found the majority of their arrangements a little too busy for my taste, with simply too many parts doing too much. There were typically several parts on strong beats and several syncopated parts on each track, leading to cacophony. Further, once the listener had heard the structure in the first several measures there was little nuance or change throughout. Added to this is the repetition of the same five-to-seven syllables throughout the album, but often used in mind-numbingly complex and distracting combinations; What I Like About You is the worst offender, also featuring an irksome Australian-sounding accent in the background parts.

Production is pretty good, with a tendency toward tuning a bit heavily. I particularly enjoyed the filter on the lead in Be My Yoko Ono, an all around good track. Sometimes hampering is the overly complicated percussion, which is can be more noisy than actually driving the beat.

Wake Me Up, Before You Go Go is fantastic. The arrangement hits the original dead on, and everything just gels. It's the best collegiate track I've heard this year.

The group has great pipes. They are never once out of tune (possibly with some help at the mixing board). While blend is generally decent, I sometimes think the high end is a little too poignant. I continue to be amazed at the range these vocalists can cover effectively. While they made up for it in energy, the group lacks a sense of musicality. They hide behind big percussion and complex arrangements to make up for lack of emotion, dynamics, and individual feel. Most tracks sound one of two ways: fast or slow. Oldies sound like southern rock sound like Jason Mraz. Soloists are passable, with Smith standing out for excellence on Wake Me Up, Before You Go Go and the soloist on In My Life standing out for being truly atrocious.

The Mendicants have the basics down, and great energy to boot. With a clearer understanding of the music and a more dynamic and diverse delivery, their next album will be even better.