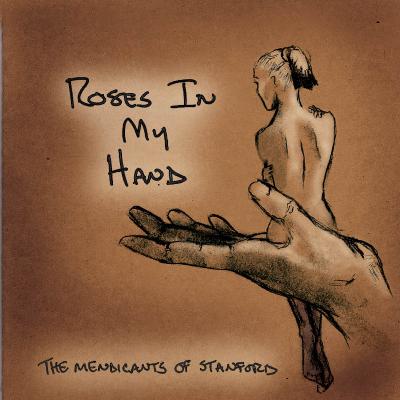 The Stanford Mendicants latest, Roses In My Hand left me feeling like I'd received an unsightly sweater from a beloved relative — which then had to be judged in a fashion reality show. Ahhhhh! Not fair! You can't help but like these charming, fun-loving Mendicants and so you don't want to be critical, but by RARB standards, this album has issues that charm alone cannot save.

Roses In My Hand shouldn't have been such a tough listen. There are good song choices and the intonation is thankfully studio assisted (competently for the backups, but with more than occasional distracting artifacts for the leads). But even when things come together technically, there are any number of artistic choices that just fail to make for a cohesive sound.

The thematic moments between several tracks are an attempt to provide a slight narrative to the songs. The instinct is a good one. The Mendicants are attempting to create something greater than "songs I like to sing" and that's laudable. Unfortunately, this solution is awkwardly tacked on, unskippable, and does nothing to help the album's listenability.

When the Mendicants sing as an ensemble, they're pretty strong. But most of the leads on this recording are weak by comparison to today's airbrushed, multi-take, Melodyned a cappella shininess. This is the critical failure. Leads are the cornerstone of pop and rock music and that's what's being performed here. It makes track after track an uphill battle.

It's important to note that these singers are hardly less talented than most. But in these songs, in these keys, in these arrangements, they're regularly asked to accomplish just a bit more than they're comfortable with. Not that the challenges aren't met. They are. But an audible discomfort remains. That's not so unusual for collegiate a cappella, but here, that discomfort isn't edited out.

So how do you mix a weak lead? Bury it? The Mendicants regularly seem to think so. The mixes keep the back-ups prominent (to a fault) while the leads are largely submerged. The logic of doing that is self-evident, but the result is frustrating in its own way. Back-ups just fail as the focus of a pop-rock song. Strong nonsense diction coupled with fairly loud relative volumes forces backups to the spotlight. Our attention goes right to them. But once in the star position, they can't deliver a reason to listen to the song in the first place. It's a recipe for disaster.

Roses never really liberates the listener from these kind of disjointed experiences. Take Hello City as an example. The song suffers from a schizophrenic background: some standard syllables, some lyrics that feel like inside jokes rather than enhancements of the song. And then there's a descant of a highly effected electronic synthesizer. In the world of arranging, there's a place for all of that. But in one arrangement? Is this goofy? Natural? Hyper-realistic? It's as if the lead had been abandoned to fend off a warring accompaniment with an agenda all its own.

All that said, the Mendicants do bring some real pluses to the table. The vocal percussion sounds are quite strong and fairly realistic-sounding throughout the album. This provides much needed shoring to the song structures and does help the listenability. Leads on Dreaming With a Broken Heart, What I Got and Everything stand above the rest for their largely natural delivery and often smokey tone colors. I Heard It through the Grapevine is a compelling arrangement with its captivating opening and driving energy. What I Got has moments where the textures of lead, backups and processed drums make for a really enjoyable mix.

The Mendicants have many strengths, but this isn't the recording that shows these talented singers at their best.

It's been three years since Beggar's Dozen was released in 2006. The Stanford Mendicants featured on this year's Roses In My Hand are a different group since last I heard them. I wouldn't so much call them "new and improved", but perhaps "simpler and more effective".

The 'cants repertoire has always shaded towards the slightly cheesy, and with well-worn tracks like I Heard it Through the Grapevine, Can't Take My Eyes Off of You, I'm Yours and Steal My Kisses, surely no one would accuse these guys of thinking outside the box on this latest album. What's more, with only two exceptions — the wonderfully inventive vocal jazz take on the 59th Street Bridge Song and the bluesy opening of I Heard it Through the Grapevine — there isn't anything that you would consider complex or ear-opening in the arranging department, either.

Why then does this album score better than its predecessor? Because at least in this instance, the whole is greater than the sum of its parts. These guys know a good "pocket" when they find one, and more often than not, their singing sits squarely inside. It's almost like musical comfort food — nothing too sophisticated in the preparation but yummy on the way down — even if you question later whether you should have indulged.

Of course, there is a risk/reward factor to consider. The Mendicants don't take much risk; heaping praise would be undeserved. A measure of creativity is what elevates the aforementioned Grapevine and Bridge Song, whereas it's the lock-solid "feel" of Steal My Kisses and Everything that make them hard to resist even in their simplicity. Conversely, the minimalist I'm Yours, sans any sort of percussion track, falls flat while Can't Take My Eyes Off of You tries to layer too many competing rhythms on top of each other. Dreaming With a Broken Heart and Everything are pleasant enough, but there's barely enough arrangement beyond block chords so that no amount of energy or "feel" can rescue them.

To be honest, I'm not sure if I'm damning the Mendicants with faint praise, or perhaps praising them with faint criticism. This album doesn't set lofty goals for itself so those goals are perhaps more easily achieved. It's like a gymnast performing a routine with a lower degree of difficulty than her teammate. You might enjoy both performances and the easier routine might even score better. But will you be impressed? Probably not.

With Roses In My Hand, the Mendicants deliver another album of polished classic and neo-classic male a cappella. Well-executed and inoffensive (if a bit uninspired), Roses In My Hand is a fine example of good but unexceptional a cappella.

Whenever I listen to a new Mendicants album, usually one word comes to mind: pleasant. The singing is decent enough, peppy and in-tune. Production is nice — mostly organic with a nice sheen to it, some bells and whistles thrown in to keep it interesting. A smattering of soloists, some of which are great and some just mediocre. Some catchy repertoire featuring male-a cappella stalwarts of old (Huey Lewis and the News) and new (Barenaked Ladies). Serviceable arrangements that propel the album even if they are repetitive. Even the artwork and packaging is good. Overall, it's a pleasant CD that makes for a decent listen.

Yet Roses In My Hand never makes the leap from pleasant to compelling. I think there are two main reasons for this. First, the singers in the block rarely seem to connect with the material emotionally. The pleasantness mutes the emotion. Roses In My Hand also feels lazier than previous Mendicants releases. For instance, one of my favorite things about the group was its tenacious articulation and diction, which has gone wayward on Roses. Second, the performances don't pack a musical wallop. In particular, vowel shape (especially on lines where the block is singing words) is all over the place, distorting blend and never really focusing the energy. The basses also felt muddy throughout.

I should also note that the album features answering machine vignettes between tracks. I found them unnecessary and felt they detracted from the musical flow.

This isn't to say Roses In My Hand doesn't have its nice moments. Dreaming With a Broken Heart is the tightest track, with a taut sense of tenderness and a great build and decay — it's no wonder the group took the album's title from this song. Everything had a nice swing to it. And the album features some great solo performances from Solomon Lee and Patrick Kozey on I'm Yours, Jai Krishman on Sun Comes Up, and especially Sicheng Su on 59th Street Bridge Song.

In sum, Roses In My Hand continues the Mendicants' tradition of providing a pleasant, if not outstanding, listen.