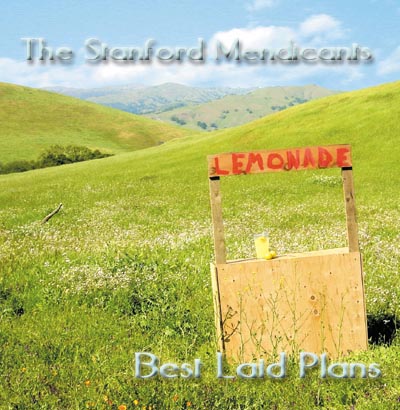 The Stanford Mendicants continue their slick, wall-of-sound tradition on their latest CD, Best Laid Plans. Solid leads, well-matched to their song choices under the direction of Ian Hepworth, top pitch-perfect, pop-rock arrangements. The result is 43 minutes of feel-good, collegiate, all-male a cappella.

The distinctive hand of engineer Bill Hare has finally been given the freedom, financial backing, and time to allow The Mendicants to really shine. And this shine is a classy one; no giving away the magician's tricks. Rich resonant bass; clear upper voices; solid, never-distracting VP; gorgeous presence — hell, even the fade-outs are terrific.

One lesson The Mendicants can teach other groups is that great CDs require not only significant work, but also significant studio time. The Mendicants' scores reflect good block arrangements, good leads, and near-perfect production. Track after track of what could otherwise be really good crossed over to excellent. Production matters.

I had to take off points for one very well-produced piece: Billy Joel's Lullabye. Here, despite the above-mentioned production, despite a good arrangement, despite the very pleasant voices of the Mendicants, the track falls terribly flat. Why? In a word: phrasing. When tracks have driving VP and infectious energy, as many of Best Laid Plans' selections do, the phrasing has as much to do with board mixing and arranging as anything else. But here, where the musical lines are so exposed, where the sense of breathing, of motion, and most importantly, of emotion, are essential, the studio doesn't carry the day for The Mendicants. The phrasing is nearly metronomic, and though the track is technically excellent, it is an artistic failure.

That heavy gong having been sounded, let me wrap up by reminding would-be listeners that this is a fun and chronologically diverse pop/rock CD with good leads, great energy and terrific production. I only wish more CDs could match The Mendicants' high standards.

When I last heard the Stanford Mendicants, they were a group of talented singers with a nifty blend, but somewhat torn between a "rock" repertoire that let them cut loose and more "traditional" selections that showcased their collective gift for ensemble singing.

With their latest offering Best Laid Plans, I'm both pleased and disappointed to report that not much has changed.

For the first two-thirds of the album, I was certain that the Mendicants had made a definitive decision to move towards more "modern" covers. A rather bland, square version of Build Me Up Buttercup to open the album notwithstanding, five of the next six tracks showcase songs and arrangements that put The Mendicants in high-ranking company, among the better (but not yet the best) all-male collegiate groups in the country. Chris Ayer's arrangements of King of Wishful Thinking and Billy Pilgrim's Insomniac are top notch, with solid solos, steady VP, and some wonderful playfulness with background syllables (specifically, the opening of Wishful Thinking). Danny Murphy contributes two arrangements as well (Windmills from Toad the Wet Sprocket and Time Ago from Black Lab), both of which are nicely done ballads, though the latter is hands down the better of the two arrangements and performances.

Sandwiched in this superior sextet (the fifth song, unmentioned above, is I Go Blind from Hootie and the Blowfish) is the Rockapella version of Pretty Woman, which isn't so much a testimony to the Mendicants' ability to reproduce Rockapella (though they do it damn well), or Ryan McCormick's ability to transcribe (though he acknowledges the source, I think his "arrangement" credit on this is a bit of a stretch — perhaps "adapted" would be a better word). Rather, The Mendicants' well-done version of Pretty Woman is testimony to the original arrangement: It's just flat-out terrific, and so it becomes a blessing and a curse for The Mendicants, since its quality is particularly noticeable by comparison to even the best of the remaining arrangements on the album.

After track seven, the guys take a sharp left turn back into "traditional" territory with a clean, but utterly uninteresting, take on Curtis Mayfield's It's Alright. Not even the quick segue into Bob Marley at the end held my attention. I know from their last album that these guys can handle vocal jazz, but Curtis Mayfield needs a heckuva lot more soul and a truly gritty solo. This is then followed by a nicely engineered (processed to give it an "older" sound) but, again, rather unengaging version of Help Me Rhonda, a song which really has nowhere to go after the first verse and chorus, and this version certainly doesn't find anywhere new to explore either. And rounding out the traditional trio is a lovely, if a bit busy, rendition of Scarborough Fair which similarly lacks variation in the countless iterations of the song's melody. Mind you, all of these are well sung, but you may find yourself nodding off.

Suddenly, out of nowhere, came Two Princes from The Spin Doctors, and the guys were squarely back in rock and roll country. Honestly, though, it was mainly the upbeat VP that instantaneously roused me, as this song was a popular collegiate cover already 5-7 years ago, and this arrangement, while well performed, resembles many others of the same song. (By the way, how is it that there are NO VP credits anywhere on the album? It's a crime if you ask me, especially on this song.) Rounding out the album is Lullabye from Billy Joel, with a background track of environmental sound effects (dunno why — struck me as a bit tacky). The guys sound fine (some unison intonation issues in the bass but nothing major), but hearing Scarborough Fair and Lullabye within two tracks of each other had me getting ready for bed.

All of which adds up to why I'm pleased and disappointed. The guys continue to churn out quality a cappella, and that always makes me happy. But they really haven't moved beyond where they were. They do some things better than they did (VP in particular), but their judgment for repertoire remains a bit suspect and their arrangements once again become repetitive by the second minute of every song. Much of what I said about their last album is still true about this album. When you're already "good", I suppose staying "good" is an accomplishment. But these guys could be "great" — they're just not there yet.

I had a very difficult time giving numerical marks to The Stanford Mendicants' latest album, Best Laid Plans, mostly because of the disparity the album contains. This is a prime example of why you need adequate planning and budgeting when cutting a studio CD; whether the group ran out of time, or money, the difference in quality between the beginning and end of the album is disheartening.

The decisive break comes around track seven, King of Wishful Thinking, though It's Alright has some redeeming qualities. From this point on, The Mendicants just don't seem to have a firm grasp on the music they are singing. The notes are there, but there just isn't precision or tuning like the opening tracks have. The energy is decisively lacking as well. The arrangements on the second half are also much weaker than the beginning arrangements, culminating in Rhee's version of Billy Joel's Lullabye, which lacks the essence of the original, and actually mis-transcribes several of the chords. The weakest-song prize was a close call, however, between this song and Scarborough Fair.

I feel confident dismissing the latter half of the album. Which is a shame, because the beginning of the album is quite good. The Mendicants are your classic male a cappella group — rich, saturated, and soulful ballads make up the core of this album. Despite fairly simple arrangements, both harmonically and technically, the songs are moving, and generally not boring. I pine for a bass section like this in my own group. The notes they hit are incredibly full for such low depths of the range. The album is also very appealingly packaged, with excellent quality artwork even by professional standards. Finally, the solos are fantastic, led by a brilliant performance from Tanner on Insomniac and Murphy in Time Ago. And the chord change at 0:54 of Pretty Woman is to die for.

Of course, there are areas where the group could improve. The mixing and editing were very good on the ballads, but I would have liked to hear a more up-front or focused sound, particularly from the bottom two parts, in peppier songs such as Buttercup or Pretty Woman. One of the reasons the second half of the album is so weak is the concentration on more upbeat numbers. Even then, they take painfully slow tempos in Wishful Thinking and Help Me Rhonda. This group's biggest challenge will be to bring the musicality of their slow songs to the more upbeat tunes. The percussion is pretty blah, providing a nice beat but never really complementing the song (with the exception of Buttercup, where several overlay tracks are apparent but very effective).

Would I buy this album? I guess. On my first listen, I was amazed through most of the first six tracks, but was sorely disappointed by the remaining six. I don't think 40 minutes of quality sound is too much to ask for. Maybe you should consider holding out for the next one…

For ordering information, visit the Mendicant website, send email to mendicants@lists.stanford.edu, or write to: