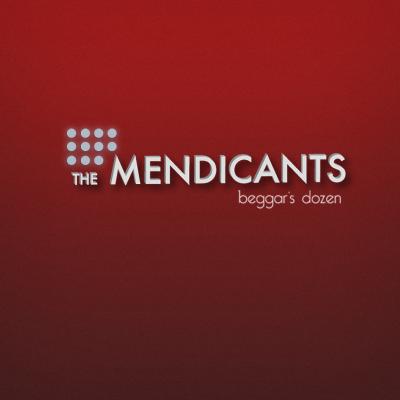 The less you know about a cappella, the more you'll like the Stanford Mendicants' Beggar's Dozen. I liked Can't Get Next To You for its occasional rawness. I liked Matty's solo on More Than A Feeling and Red Sweater — though the two sound like two completely different great soloists. I found pretty much everything else to be just ok: fun for fans, a pass for the rest of us.

Here are a few things that sort of made me sigh disappointedly: meeow guitar solos, failure to fully credit all the artists, distracting background syllables, lack-luster VP, overdone songs like Accidentally In Love, leads that clearly aim to imitate the original artist's personal style. I liked seeing a Cars cover in there; you don't see that too often. But overall, I'm still sighing.

There's not that much to say. This is not a CD that will get much repeat play here, but not because it's so bad. There really weren't too many glaring errors (I'm betting due to Bill Hare's production hand), but neither were there many musical moments that I'd care to hear again. Beggar's Dozen is largely missing dramatic contrast. It's also lacking originality in the larger sense. That is, the arrangements weren't done by anyone else first, but neither do they sound different from so very many other groups' material.

Of course, if you aren't familiar with the last decade or two of a cappella, then this CD could be a big hit with you. Its failings are derived from context as much as from absolutes. I have a feeling that the Mendicants sell this material with live energy and personality in a way that simply didn't translate to the recording.

I was excited to review Beggar's Dozen, the newest CD from the Stanford Mendicants, having reviewed their three previous albums and having thoroughly enjoyed the most recent of those, entitled Mendication. Unfortunately, the 11 tracks on Beggar's Dozen (get it?) didn't really leave me begging for more.

It's disappointing to see a group as talented as the Mendicants take a step backwards. But to some extent it's to be expected, or at least forgiven, among collegiate groups where graduation makes it that much more difficult to constantly replenish and sustain the talent pool. The guys who were newbies two years ago on Mendication are now running the group, and while the same potent energy, sensible repertoire, and generally pleasing solos are still there, the execution is not quite up to snuff.

I find it unusual to open my issues with comments on Bill Hare's work — and to be fair, Bill works at the direction of the group so this may very well have been the gents' choice — but while there are some wonderful "Bill Hare moments" here and there (interesting effects choices, some playing with stereo effects, etc.), the album overall does not feature the glossy sheen that is characteristic of Bill's work. There's a processed bass that feels too processed — I can't tell if it's octaved, or chorused or what, but on multiple tracks it dominates the sound and threatens to overwhelm and swallow the arrangement. There are also quite a few high tenor moments (moving passages in Roll To Me; whining in Hey, Hey) that sound noticeably under-pitch, and overall the ensemble never quite gels into a cohesive blend on several tracks (Cheeseburger In Paradise most notably). Bill often notes that he can't work miracles with what isn't there to begin with, so I wince to think what some of these tracks may have sounded when they were first recorded.

Perhaps I'm being a bit harsh: because overall the CD is not a bad listen. It is front-loaded with probably the overall best tracks coming right from the top. Matty Smith's solo on More Than A Feeling is definitely worthy of a CARA nomination and, but for the high tenor issues noted above, Roll To Me has an infectious energy that is reminiscent of, but doesn't come close to equaling, the brilliant Wake Me Up Before You Go Go from Mendication.

But the rest of the CD is truly disappointing given the ‘cants' previous work. Tracks like Cheeseburger In Paradise (waaaay too "indie"-sounding) and I'm Going Down (this is Springsteen, remember?) are really devoid of any "feel" for the source material. At their best, the arrangements establish a nice groove but fail to develop it any further than the first verse and chorus and at their weakest, the arrangements are too busy for their own good and come off more as background noise than support for the solo. And as Minkoff noted in his Mendication review, the guys are still desperately in search of a good crash cymbal sound.

I'm not giving up on the Mendicants by any means — the raw ingredients are still there and they have too solid an a cappella tradition to suggest that all hope is lost. Every group has a bit of an off year and as far as I'm concerned, this CD is theirs.

This is my third go-around reviewing the Mendicants, and other than being amazed at their productivity, I am also fairly amazed at their consistency. The vast majority of this album could have been pulled straight off their last effort, Mendication. With college groups' typical turnover rate, this similarity is astounding. As such, many of the comments I made about Mendication will still apply here.

My biggest beef is still with arrangements. While they are certainly busy, they are not complex. The songs settle into a groove in the first few bars, and that's the transcription for the rest of the track. The group's consistency may stem from the formula all the arrangements seem to follow: bass line, a few voices on the strong beat, a few voices on the off beat, an occasional couple of sustained parts, and no variation except for the occasional instrumental solo. As I have mentioned before, this leaves little nuance throughout the album. All the tracks generally sound about the same, even more so for the similarity of most of the tracks on Beggar's Dozen. But boy, what a track list. This is completely personal preference, but many of my all time favorite songs are on this album. Unfortunately, the uniformity between tracks quickly impeded my enthusiasm. I was particularly disappointed with Hey, Hey, a tremendous song whose essence was simply not captured by the Mendicants.

Production is a little better on Beggar's Dozen than Mendication. I liked the blend a lot more: the previously annoying quality of the upper parts has been leveled off; in fact the opposite is often present with a bit too much bass for my taste. Some bells and whistles are tastefully added, especially to instrumental solo parts, which add flair and excitement to the album.

Singing is still good. Parts are in tune, and these men still go all out in over-enunciating syllables and delivering energetic performances. I have always liked the Mendicants soloists, and was thus surprisingly disappointed by the mediocre-at-best solos on Beggar's Dozen. No one really shines. I have to give props to anyone who attempts a Boston solo, but Smith just doesn't have the chops to completely pull it off. He fairs better on the opening track, but there is still something missing. Attempts at Jimmy Buffet and the Black Crowes are just lackluster, but a few of the solos on Can't Get Next To You are just plain awful (but at least balanced by the lead voice, who delivers the best solo on the album).