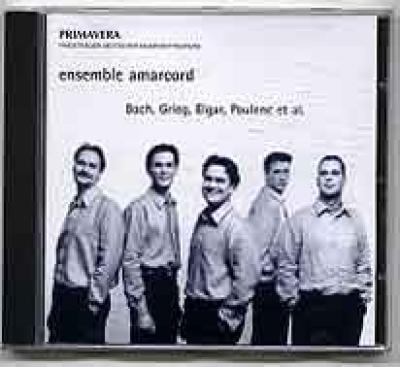 Okay folks, here's how you get signed: train your voices, tune beyond reproach, consult the best arrangers you can find and nail everything you perform for an audience. Ensemble Amarcord's latest album oozes professionalism, such a joy in any line of work but especially in music.

As it happens, this is a classical album. But the skills that make it so good are universal. This disc shows that five good voices really can make a phenomenal sound with minimal studio assistance. The strength of Ensemble Amarcord's intonation could just as easily bend around jazz, folk, or even pop music. Strong fundamentals open so many doors and so many broad horizons. It also helps to have a really good bass.

All that aside, don't go looking for folk or jazz here. Despite the variegated repertoire, this remains a classical disc with classical sensibilities. The English pieces have a stylized, clearly foreign accent and the non-English pieces sound pretty stylized too. The one pop song, The Rose, gets such a lavish classical setting that it almost overcomes its indefatigable ties to Bette Midler. Well, I said almost. Camp is a reappearing theme on this disc, what with the chirpy trio of Marcus Ludwig songs (b. 1960) that round out the disc.

My favorite tunes were the Elgar set at the beginning — such a lush sound, such strong compositions. Start there if you get this disc. When mine arrived, I made the mistake of jumping around first to check out repertoire I was familiar with. I wouldn't recommend that to future buyers — this album really works best if you listen to it in order. One other disclaimer is that not everyone will like all the songs. Their arrangement of Loch Lomond didn't grab me, by no fault of the execution, and the same goes for the Swingles-esque setting of Bist du Bei Mir. But don't let me talk you out of liking them, should you so choose. You may dig this album, you may not, but either way I think you'll see what all the fuss is about.

The Ensemble Amarcord, from Leipzig, has won numerous awards at international competitions, including winning the 2002 German Music Competition, and its recent release, ensemble amarcord: Bach, Grieg, Elgar, Poulenc et al. shows why that should be. This exquisitely musical quintet serves up a broad range of music with style and charm and loads of talent. Comparisons to the King's Singers are inevitable, and justly deserved.

The tuning and blend are impeccable, with skillful solos coming from all ranges. The ensemble has fabulous command of textures and dynamics, making for moments of deep melancholy, humor, tenderness, or chaotic energy. There is a range of selections on the album. There are more "serious" older classical, romantic, and impressionist pieces, contemporary compositions, traditional folk songs, more comedic pieces, a setting of Amanda McBroom's The Rose, and a couple of Ward Swingle's arrangements of Bach pieces. They tackle their entire repertoire with aplomb and ease, making listening to the album a simple pleasure.

Highlights will clearly differ for each listener, though I have been fascinated since the first listen by the amazingly difficult passages in Ein Jager langs dem Weiher ging which move chromatically in a way that is almost reminiscent of a record being slowed down and sped back up. The Poulenc piece Clic, clac, dansez sabots and the three closing pieces by Marcus Ludwig all have a captivating energy or mystique about them, and the tenderness of Mia Helander's setting of An Old Song Resung is quite spectacular. But you may find your own highlights anywhere on the album, depending on your personal tastes. If you are in the market for an album from an ensemble like this, you will not be disappointed with this offering.

It was a pleasure for me to receive Ensemble Amarcord's latest disc, Back, Grieg, Elgar, Poulenc et al. To be able to return to my classical roots is refreshing, especially with a talented ensemble such as this.

Ensemble Amarcord is an all-male professional a cappella ensemble, founded in 1992. They have maintained the same core group of five, all former members of the legendary St. Thomas Choir in Leipzig, their home location. They have amassed several international accolades and numerous recordings. They focus on the Medieval through Baroque periods as well as lighter-hearted fare from the 20th century, though they do break out of these genres on occasion. They do none of their own writing and arranging, but commission numerous originals and new transcriptions from the nearby Mendelssohn School of Music.

Across the board, the disc is pretty good. Tuning is spectacular. Each passing note, whether a pedal tone, half note, or sixteenth note run, rings true. Cadences are particularly beautiful, as they back off the intensity of the sound for a well-rounded and perfectly in-tune chord.

Tone is generally appropriate. The top four parts match in intensity, timbre, and placement. Unfortunately, this isn't true for the bass, who stands out as being much weaker than the rest, with a less focused tone and unpowerful sound. I would also like to see a little more variance — the ensemble zips across more than 300 years of music but doesn't vary tone or interpretation.

Engineering and production is pretty decent. This is about as organic as it gets, with absolutely no effects added, giving the listener what I imagine is a pretty good representation of what they would sound like live. They recorded in a very dull room, which suits them well for the faster patter songs, but I would like to hear some more natural reverb on the more lyrical tracks.

In general the weaker tracks are the faster patter songs, or anything with a solo line. This group needs to come to grips with the fact that they are an ensemble, and not particularly suited to solo lines. They fare much better on more homophonic pieces such as the stronger opener Yea, cast me from heights or Toro liti. These pieces have such beautifully written and executed harmonies they swell with feeling and emotion. The lighter tracks, in comparison, sound pleasant but are never really touching. This isn't to say they don't entertain, but with a glimpse of the ensemble's capabilities, it made me yearn for more. The German pieces tend to fare better than the French or English. One final suggestion — I'd like to see more detailed liner notes. These contain an interview with the group, whereas I would have liked to have known more about the tracks. With a repertoire that is somewhat unfamiliar to American audiences, it would have aided me immensely to have some background on the pieces.

In sum, this is a good but not great group; they have not yet reached the level of the more well-known ensembles such as Chanticleer, Hilliard Ensemble, or the mixed Voices of Ascension. With some more variance, possibly a new bass, and greater specialization maybe the years ahead will prove different.

Visit the group's websites in the USA, in Germany, and elsewhere.