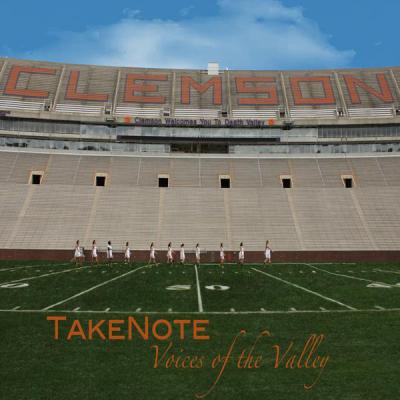 Clemson's TakeNote fulfills the promise of its sound best on the pure electronic take of Telephone. A strong, sassy lead soars over an ocean of robotic, enhanced voices and thumpy produced beats. It's best if you don't think about whether this all-female collegiate group actually sounds remotely like this live; just dance and enjoy.

Where the group ventures closer to rock, things get weaker. The backs are neither purely rockin' singers nor purely "instrumental" sounding. Artificially tuned and effected scat is the go-to choice for TakeNote; it isn't always what the song and arrangement call for.

Just as the beauty of an actress relies on make-up and lighting, TakeNote's sound on Voices of the Valley rests similarly on the arrangers, editors, and producers. A movie star may be given a gently alluring glow, or embarrassingly collagenated duck lips and silicone sweaterbusters. Some would argue that the latter works, but most would agree its success is tenuous. TakeNote struggles as the group attempts to strike the right balance between the unamplified collegiate singing style and its computerized, effected, somewhat evil doppleganger (TOS Spock with goatee). It's a similar struggle to the one the ladies face regarding a song's instant recognition vs. the creativity of unexpected musical choices.

Where once RARB's category "Tuning/blend" referred simply to how in-tune the singing was, in today's studio reality, the category must now encompass artificiality, and its musical appropriateness. When chords sound robotic, listeners use this as an identifier of style and genre. Sometimes it's the perfect effect, giving an electronic edge to a vocal take of an electronica song (Telephone). Sometimes it just sounds fake and awkward (duck lips). Clemson's TakeNote, like many a cappella groups, may have had very little to do with these choices, which can involve something as technical and picayune as the number of milliseconds in which a given note is brought to true pitch by a computer program like Auto-Tune or Melodyne. Technical though it may be, it's a dominant element in experiencing Voices of the Valley.

This isn't to say that TakeNote doesn't find moments to rise above. The powerful leads of Ordinary People and Love the Way You Lie make a lasting impression, and many moments within other songs are also quite good.

If the arrangements had more decisively diverged from the originals, if there had been more unexpected twists (like one of the harmonic choices in Telephone), if the backs had phrased with even greater intensity and grace, then the impact of Voices of the Valley would have been more significant and more affecting. But what's here will surely please fans, friends and family, and that's not too shabby.

It’s been a while since I’ve had the opportunity to hear what the women of Clemson have been producing. It’s been worth the wait. While not groundbreaking by any stretch of the imagination, Voices of the Valley is a very pleasant listen. Collegiate recording titles aren’t usually so adroit in expressing exactly what the contents of the recording represent. But I doubt there is a more apt title than Voices of the Valley for the TakeNote's latest album. The name conjures gently rolling fields of gold or tranquil waves of grain; the equivalent of a cappella supermarket music.

And that’s exactly what these ladies deliver — some flowery ballads, a few diva-lite/girl power mid-tempo pieces, choral sounding pop pieces, and a surprisingly moving R&B number. Tracks that are a bit bland in their earnestness, but nonetheless beautifully executed. Even with the strong musicianship and unobtrusive production values, a listener won’t remember any of the album after the last note of Telephone is sung, but you will appreciate most of the notes sung prior to it.

The definitive highlights occur in the middle of the disc. This includes a very entertaining Cowboy Casanova. It’s got a bit of verve and sass that I’ve missed in other recent recordings that I’ve heard. The arrangement propels the song forward without being overly complex or possessing the plodding downbeat that has plagued a lot of female a cappella this season. Energy is just that, chock-full of some fine sparks here and there—providing a bit of snap and crackle to liven the mood. And it took me a while, but I eventually warmed up to Love the Way You Lie. The group doesn’t attempt an adrenaline-inspired take on the song, but more of the desperate foreboding of the choral hook into something venturing on the reimagined. But what I love is the performance of Ordinary People. Yes, I’m a sucker for weepy ballads, but this one is stellar. The backing vocals create a wonderful blanket of sound with some effectively threaded auxiliary parts on which soloist Libbie Dean skillfully weaves her vocal magic. She’s got a very smooth texture to her voice without being overly polished. The performance comes across as heartfelt and confessional. Very impressive. The two together are like a great pairing of cashmere to silk.

What doesn’t work are arrangements and performances that should have some truly aggressive approaches of grit, anger and angst to capture the essence of the originals. Whereas this approach works for Love the Way You Lie, I found myself tapping my toes while listening to Battefield. Why would I do that? It should not be a toe-tapping number. This version is by Jordin Sparks, but really Pat Benatar’s Love is a Battlefield shouldn’t inspire such a reaction either. Benatar’s Heartbreaker fares a little bit better with some jaunty moments, creative soprano vocal twinkles in the background, and accented phrases that approach ballsy, but more like your kid brother trying to impress an older brother’s girlfriend by showing his prowess and street cred. But overall the conviction is lacking and certain choral tics take away most of the punch of the original.

ALSO: YOU DO NOT RUIN MY FAVORITE HEART SONG ALONE BY MIXING IT WITH MARIAH CAREY’S OBSESSED.

If you like to listen to women singing pleasant songs well-tuned and balanced with a smidgen of emotional connection every now and then, Voices of the Valley will be right up your alley. Sometimes you need your a cappella to be inoffensive and TakeNote is here to provide you with that option. Otherwise, aim for the mountains and wild adventure with other recordings out there.

Clemson's TakeNote takes on a collection of contemporary and classic female pop songs on its third studio album Voices of the Valley. The track list doesn't contain many surprises for listeners familiar with contemporary all-female a cappella, and that doesn't always work in TakeNote's favor. The songs on this album generally fall into two categories: those that are solid but repetitive, and those that have issues and miss the mark.

In the first category are songs such as King of Anything and Cowboy Casanova. Both of these have meaty arrangements that really keep the song moving along; there's a lot of energy emanating from the ladies in the background. Unfortunately, there's not enough dynamic range or growth within the songs to keep them from sounding repetitive; by the time the final verse or chorus rolls around, a listener has already heard it all.

It's the other songs that have bigger problems. Ordinary People is too slow and sparse; it saps out all the energy that the rest of the album has been building up, and the choral elements of the arrangement don't help. The group's older rock covers fail to rock; Alone is missing a lot of the angstful passion of the Heart version and adds an awkward, choppy bridge (which sounds like it may be a cover of Mariah Carey's Obsessed, but it's not credited). Both Alone and Heartbreaker suffer from unconvincing percussion; the latter song never achieves the gritty power of its lyrics, and the choral echoes of Heartbreaker just add to the song's tired feel.

The group does strike (close to) gold — I love the arrangement of Energy (kudos to Chelsea Hayes). There is a lightly fluttering soprano line in the background that's mixed at exactly the right level, and the song moves at the perfect pace. The group also takes an interesting risk for an all-female group: covering the Eminem & Rihanna song Love the Way You Lie. Thankfully, they don't try to rap, instead giving Eminem's verses a vocal melody. This is a really cool idea, and I wish that they'd pushed this concept even farther, giving it a more dynamic melody instead of a mostly-monotonous one. The solo gets lost against the background during the verses, and I really want to hear the verses wail as passionately as the Rihanna choruses do. The delivery and arrangement don't quite hit the mark here, but this is what I'd love to hear more of from TakeNote in the future: songs that are unusual for an all-female group, re-interpreted so they're not literal carbon copies of the original.

On a final note, it would have been nice if the album's liner notes had been better proofread. Song credits are buried in tiny print and include misleading information: original artists are credited instead of songwriters, and even that is sometimes incorrect (Alone was originally performed by i-Ten, not Heart, and the song was written by that group's songwriters, Billy Steinberg and Tom Kelly). TakeNote includes a cover in the bridge of Alone, but it is not credited. Similarly, the group's "Special Thanks" section includes several grammatical issues and egregious typos; for example, the ladies thank their Choral Department advisor for telling them when they sound "let [sic] than stellar". The group writes that it spent four semesters working on Voices of the Valley, so it's disappointing that the liner notes seem so slapdash.