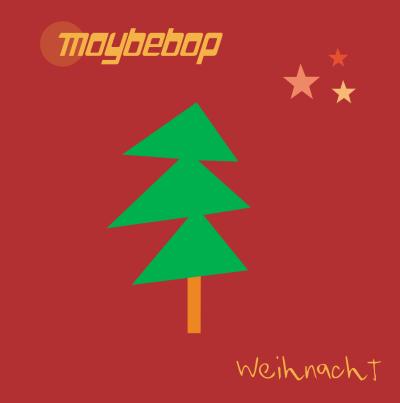 Maybebop sets the tone for a Merry Christmas indeed. They give elegance an edge with their renditions of seasonal music. Mostly German and some English is the formula they've stuck with. But now, with practiced ease, they also deliver a new dimension of sensitive musicality, smooth rhythmic feel and tasteful harmonic complexity. Weihnacht is the this year's stocking stuffer.

To fully appreciate Maybebop one should be favorably inclined towards listening to their a cappella in German. A tolerance for noticeable German accents on English tunes wouldn't hurt either. But cultivating such a tolerance is well worth the rewards of Maybebop's musicality. More than their excellent production and mixing, Maybebop propels every track forward with a dynamic sense of phrasing. The rhythms breathe, landing with just the right force on just the right nanoportion of the beat, a rare treat in the universe of computer-assisted recording, and a true division between the a cappella wheat and chaff.

Maybebop has adequate soloists in their arsenal, but their ensemble sound is the group's real weapon. Active, original arranging weaves leads into and out of the rich, chordal tapestry, while tasteful choices keep the energy high and steadfastly avoid the ubiquitous danger of allowing the arrangement's backgrounds to steal focus from the overall purpose of the song.

This is Maybebop's most mature and musical release to date. A star showing from a group with a discography of excellence.

Holiday albums present an interesting dilemma for performers. Few singers or musicians possess the chops to simply offer up traditional standards and still hope to equal or better the definitive versions that we know and love. And yet, reinterpretation risks alienating the sense of nostalgia and comfort that holiday songs are supposed to embody in the first place.

So inevitably many performers try to have it both ways, and Maybebop is no exception. Weihnacht treats us to a few typical multi-part Christmas hymns, although typically sung in German, a language well-suited to the genre. (In an aside, if you haven't had the pleasure of hearing German Christmas singers while sipping on mulled wine at a Weihnachtsmarkt [Christmas market] on a crisp December evening, you really haven't lived.) On the other hand, many of the other tracks shake it up a bit. Sometimes it works — the jazzy, brassy twists on Let it Snow mesh well with Maybebop's pop sound. Sometimes it's okay — the Chipmunks-hyper version of Frosty the Snowman was slightly more endearing than annoying, but only slightly. And sometimes it bombs - the lovely Still, Still, Still really doesn't work as an upbeat number.

Weihnacht is a bit over all the place but there are moments that take me back to a Berlin Weihnachtsmarkt, which isn't a bad gift to bring to the table. You might need some mulled wine to get through a few of the tracks though.

Being American and Jewish doesn't make me the ideal consumer for a German Christmas album, but I happen to really enjoy Christmas music. Yet, Maybebop's Weihnacht misses the mark. Well, it doesn't exactly miss the mark; it more aptly circles the mark, taking stabs at it and hitting a few times.

Weihnacht is an up-and-down album of songs placed in the wrong order. Maybe there is an explanation or some grand design for the track listing, but I am unable to uncover what this is due to the fact that half of the songs are in German. Listening to music sung in a foreign language doesn't bother me (in fact, one of my favorite songs on the album is Umtauschen), but I am frustrated that Maybebop chooses not to include the English translation for the titles of the German songs in the liner notes or on their Web site.

The album opens with Lustige Schlittenfahrt, better known as the classic Sleigh Ride. Maybebop gives it a jazzy twist, moving along with a nice groove. I can't sing along but I like it nonetheless. Title track Weihnacht is next. The online English-German translator I'm using says Weihnacht means "Christmas", so I guess that's the name of this song. I've never heard this tune before, but it's nice and pretty. It has a good bass line, enjoyable melody and pretty harmonies.

Things take an unnecessary dip over the next five songs, with the lone bright spot being Let it Snow. Happy Xmas (war is over) is the first track in English, and apparently written by John Lennon, but understanding the lyrics doesn't help spruce up an otherwise boring track. Es ist ein Ros' entsprungen is a throw-away that drags along. The arrangement for Wunderschöne Weihnachtszeit is way too basic, causing Maybebop to sound like a high school choir. Still, Still, Still is different from the first six songs in that Maybebop loosens the reins and uses effects and vocal percussion, but it sounds as though they are used to cover up some vocal laziness, bad chords and a lack of energy. It's too bad because Still, Still, Still could have been an excellent track.

Maybebop redeems themselves on Frosty the Snowman, Umtauschen and Winterwonderland. They understand that Frosty is a children's song and they embrace it, putting together a cooky, fun arrangement and incorporating some new humor. Listening to Frosty sparks memories of riding a merry-go-round as a kid in the middle of December while snow is falling, with my parents by my side, and everyone wearing big Hallmark-size smiles on their faces.

Maybebop brings back the jazz groove from the opening track for Umtauschen. They really have this jazz a cappella thing down, and I wonder what an all-jazz Christmas album would sound like. I think that should be Maybebop's next challenge. Winterwonderland sounds great. Maybebop switches gears and goes contemporary pop/rock. Effects and vocal percussion are used to great effect here; there are nice electric guitar and bell sounds incorporated, as well as a cool scat section. They do a nice job thinking outside the box to reinvent one of the classics.

Weihnacht closes with an average version of The First Noel and an awkward German-Christmas rap, Morgen, Kinder Wird's Was Geben. Perhaps Maybebop thought too far outside the box on this one.

I have no doubt that Maybebop's already built-in and German fan bases will love this album as they'll get to hear the guys tackle some Christmas classics, as well as some off-kilter ones. But Americans who don't speak German and only know the popular Christmas tunes will not find the same joy as their European counterparts. Weihnacht is good, but it just doesn't stand up to Christmas releases from groups the likes of Rockapella, The Blenders, Eclipse, or Five O'Clock Shadow.