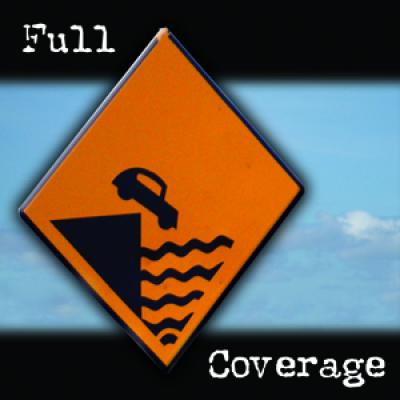 It's tough for me not to take credit for University of Oregon On the Rocks' full ascension into the big leagues with Full Coverage. Their first eponymous album was a fairly unmitigated disaster, and I asked them to get the basics right. Their second album, The Backgammon Sessions, got most of the basics right. So I demanded some better mixing, and cautioned them to avoid the mimicry trap in which so many collegiate groups are currently caught, to push their creativity to its limits. And they give us this beauty, fabulously mixed, with not one, not two, but THREE originals. And good originals no less!

I mean really, what's a reviewer to think? (Cue self-patting on the back.)

Well, I suppose it might have *something* to do with the continual improvement of OTR arrangements. The opening of Scrum is wonderfully textured, the jazz breakdown in Cry Me a River surprises and delights, and they borrow a page from Off the Beat with their subtle song overlays (e.g., "Sweet Home Alabama" ups the country ante of "Somethin Like That").

And I suppose it might have *something* to do with group co-founder Peter Hollens who recorded nearly the entire project at his studio and mixed it with a little guidance from a certain guy named Bill Hare. Or the fact that Hollens yelps a stunning solo on one of the best collegiate tracks in years: Kyrie is a joy-filled, layered journey arranged with a retro style that suits the album's opener perfectly. Luckily he red-shirted a few of his college years so he could turn in this game-winning effort as his swan song.

Or perhaps it owes *a little* to the fact that just about all these guys can all sing, which we always knew, but somehow never heard as clearly as on this album. Solos aren't always showstoppers but more than capable, though the choral training peeks through a bit at times. Fortunately OTR largely chooses songs that play to its members' strengths, rather than subject us to prim and proper versions of Casey's top 40. Beyond Hollens' track, would have loved to hear a bit more from Jim Kline, whose soulful turn on the Take 6 closer was all too short.

Full Coverage isn't perfect. The middle of the album doesn't sizzle quite like the bookends, and Stacey's Mom should officially be banned from a cappella as I've never heard a group pull it off without live antics to distract from the fact that the song kind of sucks. But it's a small price to pay for an album that is both creative and yet quite old-fashioned amongst its peers. OTR proves you can still put out unbelievable a cappella without producing tracks that sound exactly like the original rendition.

And it's all because of me. Kinda. A little? Ah, well.

The boys of On the Rocks have almost knocked it out of the park with their latest recording Full Coverage. It's a triple threat of fantastic arrangements, solid singing and amazing production. Add to that three amazing original tunes and you can see why they have a valid claim to being the best male group on the West Coast of the United States.

And yet, it's not my favorite album because I literally loathe a number of the songs that they've chosen to record. There isn't a strong sense of who these guys are as a group from their selection of songs — a little bit country, a little bit rock and roll wrapped up in a classical disco bent. The mix makes for a great live show, but keeps this album from becoming a member of the Hall-of-Fame and keeps me from giving it a higher repeat score. I'll be listening to several of the songs forever, but after this review I won't listen to the whole album again if I can help it.

Some of their soloists are out of this world. Pete Hollens, Cody Curry, Aaron Matthew, Moses Barrett and Jim Klein sing with a maturity and presence that belies their young age. I hope each decides to make a career in the performing arts, because it would be a shame for any of them to stop with their collegiate careers.

In fact, I'll go out on a limb and say that by the time this review is published, Hollens will have probably won the best vocalist CARA award for his rendition of Kyrie (possibly the song award as well). I've loved his voice since I first heard him cover Without Your Love live at the ICCA finals, and he's just getting better with age. Klein's closing track Let the Words is the perfect bookend for this album. His voice melts like butter over warm molasses.

CASA Founder and President Deke Sharon has long been an advocate and proponent of original music in the collegiate scene for at least a decade now. The Fleet Street Singers’ 2004 release Fleet Street paved the way with a complete album of originals, though most of them were on the moosebutter/Da Vinci’s Notebook tip. The songwriters in OTR have delivered a decidedly more pop-rock flavor with the standout originals When My Baby Walks, Matchbook and Scrum. The lyricists have created some beautiful poems that may not come across as profound, but never, ever come across as trite or pandering either.

Matchbook is definitely radio-ready and would be a hit if performed by the likes of Jesse McCartney, Gavin DeGraw or Rob Thomas -– okay, so I couldn’t help myself on that last one. Moses Barrett has done an admirable job in crafting a soundscape which caresses his plaintive wail of a voice in delicate fiery embers. Greg Barkett delivers two brilliantly moody odes to love with the hauntingly refreshing When My Baby Walks and the nearly perfect Scrum. There is a hint of Rufus Wainwright in both of these songs with appropriate lyrical phrasing and tender emotional tugs. The initial problem that I had with Scrum came from the post-bridge “dah-dah-dah” section. Who writes “dah-dah” in a pop song nowadays? The song has definitely grown on me though and falls just below my Top 5 “go to” originals of Duwende’s I Fall, spiralmouth’s Hush, The House Jacks’ Jack It Up,

I do have a major bone to pick with the guys, though: If the music wasn't as top notch as it is on the album, I would have given Full Coverage an overall score of “2” based on the liner notes and jacket cover design. The notes are horrific — hard to read and rife with missing information and credits. I didn’t even notice that I was listed in the “Thank You” section until I’d had a copy of the album for six months. Songs are listed by the performers’ last names, while the identifying photo only lists the first names! Percussion is often the strongest element on the songs and there is no mention of those guys (Ty Boeh would not have stood for that omission). Pick some better songs, do more originals and complete the design concept next time fellas if you truly want to ensure that you are fully covered.

The University of Oregon's all-male On the Rocks' latest release, Full Coverage, is another solid release, but one that ultimately shows little progress since their last effort.

On the Rocks' strength is still in fundamentals. Singing is solid, well supported, well blended and in tune, even on pared-down arrangements such as Hallelujah. I found the tone to still have the warmth, but to lack the complexity of their last album. The sound is incredibly uniform within and across parts, showing blend is truly OTR's strong point.

While many arrangements are still simple and repetitive, some of the songs stood out as particularly original. Stacey's Mom captures the tongue-in-cheek message of the song perfectly. Another surprise standout was Disco Inferno. Yet the album's best track is the opener, Kyrie. The arrangement is excellent, and the production on it sparkles. Pete Hollens delivers an incredible solo performance, making the track truly memorable. Unfortunately the solo voices of the rest of the group just can't compare, and seem pretty mediocre in general — well-sung but with no real oomph.

The production on the album is good as well. Innovative and interesting technique on several tracks, including Kyrie and Cry Me a River, give the album life. Many of the other tracks suffer from the same problem the soloists do — while all the elements of a great song are present, there's just nothing stellar. The great sense of ensemble supersedes stand-out individual performance.

On my review of On the Rocks' previous CD, I challenged them to come out of their comfort zone; the few forays on this latest album do provide insights into greatness. OTR should continue to expand their repertoire and their grooming of individual performance to set themselves above their competition.