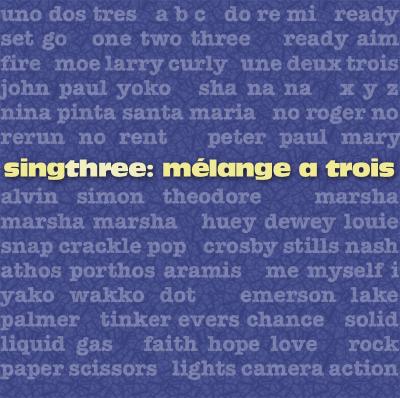 Another year, another Sing compilation — but the third time's a charm. Mélange a trois is absolutely phenomenal and well worth the price of admission.

Where Sing 2 lost me with a hodgepodge of unrelated and somewhat inconsistent performances, Sing 3 has a cohesiveness of sound that prevails over a plethora of genres and group types. This owes a lot to a generally higher quality of arranging across the board, with creative and nuanced takes on an engaging and diverse repertoire. Strong production work serves not as a crutch but instead as an enhancement of damn good singing, which is just as it should be. I was also impressed that Sing 3 had virtually no overlap with this year's BOCA album, barring UGA Noteworthy's Oasis cover; it's a real testament to the continually raising bar of excellence in the collegiate singing world to see multiple annual compilation albums that are all worth listening to.

Indeed I could listen to this stuff all day — the ominous choir over the bridge of Hysteria, the wonderfully textured interplay of Human Nature, the pristine and worth-the-hype reimagining of Wonderwall. Throw in Rajaton's soaring Finnish original, the best cover of Hide and Seek I've heard all last year, a track from the precocious Ascending Height, and you could have filled the rest of the track list with a first-grader's violin recital without losing me. There's not a clunker here, and so many gems that the disc feels like an embarrassment of riches. You know you've got something special when winning groups like Hyannis Sound and the UNC Clef Hangers are resigned to being just another pretty face in this beautiful crowd.

Compilation albums can be spotty from year to year, but the Sing series has shown a pretty steep trajectory from its inception. I'm looking forward to seeing what heights get scaled next.

Sing 3: Mélange a Trois is the third compilation album from the non-profit Alliance for A Cappella Initiatives. This album builds on the first two Sings, which first featured only collegiate groups then offered a mix of all types of U.S. groups, by adding in international groups. The results are excellent.

I always feel a little awkward reviewing compilation albums like Sing 3 because really there's no comparison. AACI probably had thousands of tracks to choose from to assemble into an hour of material. It should come as no surprise that it's a top notch album that doesn't disappoint at all.

There's a lot to love. Two of the year's most impressive tracks, Hysteria by the Duke Pitchforks and Hide and Seek by Transit, manage to still stand out. The opener, Mothership by Kid Beyond, is also superb and starts the album off with a great dose of energy. I was also surprised to notice high school groups keeping pace with the professionals, especially Ascending Height with the original Setup For the Fall. Perhaps the weakest for me was Saullekts. Although it is both beautiful and cryptic, I think its sparseness was a bit of a non-sequitur from the rest of the material.

It's a little surprising that it has taken so long to offer a compilation where literally anyone who wanted to submit could. This album features high school, collegiate and pro groups; solo acts; international groups; and even a "vintage" track that was released over five years ago (The Trial by the Tufts Beelzebubs). If there is any major criticism of Sing 3, it's that the disc is really more a display of vocal pyrotechnics and great singing than a true album. There's no theme, the tracks don't flow from one to the other, and it feels like a pot-luck that was thrown together. But it's a pot-luck where the neighbors brought filet mignon, lobster, and Dom Perignon, so who am I to complain? I just eat and enjoy.

Unfortunately, the subtitle for Sing 3 couldn't ring more true. A wide range of a cappella music, dating from as far back as 2001 to as-yet-unreleased tracks, this album has trouble staying afloat. From truly inventive, rarely heard, and original pieces like Cosmos's Saullekts to tracks that entered the global a cappella consciousness over five years ago (The Bubs's The Trial), the incongruous elements of oldies against newbies simply don't mix well enough to keep the album interesting.

When I went to the Alliance for A Cappella Initiatives website to find out just what Sing was supposed to be, I came up with this: "Sing! is an all-vocal compilation album encompassing both current collegiate groups and many professional groups. Now in it's [sic] 4th installment, the Sing! compilation has become the finest and most diverse vocal music compilation in the world." My assumption then, was that Sing 3 would be a kind of Now That's What I Call A Cappella — a sampler of today's hottest groups, their newest recordings, and some fabulous untapped talent. Sadly, Sing 3 is a rehash of a lot of stuff most of a cappella fandom has already heard.

I can't find any value in putting pieces like The Trial, Ridin' the Rails, Kivinen Tie, or even Love Train on a mix disc, except to make the statement that the Bubs, 5-Alone, Rajaton, and Hyannis Sound are all really great groups that one should watch out for. (The albums or singles of these tracks were all released over a year ago.) And has anyone not heard Transit's Hide and Seek already? A typical a cappella consumer will have already heard these songs ages ago, and with five out of eighteen tracks accounted for, thirteen new-ish tracks is a little less appealing.

To be fair, the actual "current" tracks are for the most part, quite enjoyable. I had a great time listening to m-pact's syncopated, jazzy Have a Talk With God, a snappy, tap-your-foot-along song with tight harmonies and a great sound. The Duke Pitchforks' Hysteria is stellar: a rock, bass and guitar driven epic number that is finely executed and deliciously fronted by Zac Forbes. Sadly, I found the University of Rochester Midnight Ramblers' Question! too similar in genre and execution, and it sinks in excellence when compared to Hysteria. One of the strongest pieces on Sing 3, Saullekts is not to be missed. A non-Western inspired piece without words, it is haunting, spiritual, and ultimately moving. Cosmos is unlike any a cappella I have heard before. To me, that should be the spirit of a compilation album.

And then there are some songs that don't fare quite as strongly. Summertime is a great submission by the House Jacks, but its live recording and audience applause dampens the sound and decreases the wow factor on this otherwise neat performance. Ain't No Sunshine is a new experimental version by the UGA Accidentals that won them an arranging nod at their ICCA semi-final this year, but it's still Ain't No Sunshine. And though I do adore the UNC Clefhangers, Feelin' Good is nowhere near as strong a track as the group's other masterpieces I've caught. The song is repetitive and tired (perhaps by all of the gazillion American Idol wannabes who sang it this season), soloist Andrew Avent has the Michael Buble energy and tone, but the arrangement lacks innovation and excitement.

Melange, to be certain. As a vehicle for showcasing fantastic talent like Kid Beyond and Ascending Height, Sing 3 is successful. But to pit up mediocre oldies or already recognized tracks from at least last year's CARAs seems out of place. For unexperienced a cappella listeners, the album is certain to please. But since we seem to be a rather self-contained community, most of us will have heard at least a few of these songs before, and to that end, Sing 3 is not an advisable investment. Nevertheless, the two or three tracks that piqued my interest in groups I wasn't previously familiar with made the listen worthwhile after all. Depending on what you've got already lined up in your iTunes queue, Sing 3 is a "take it or leave it" album until they release the tracks as singles and you can download the songs individually.