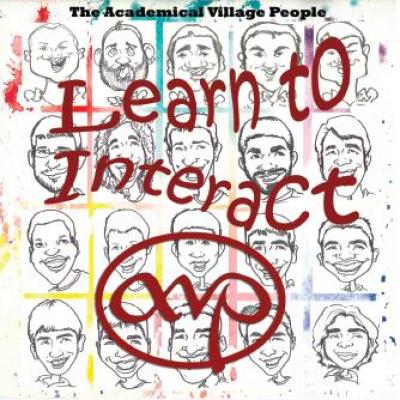 Learn to Interact is an easy job with this new Academical Village People recording, a graceful new addition to the a cappella archive. Terrific soloists and snappy songs combine for a great package that delivers even if it does not dazzle.

Dazzling is a matter of individual tastes, I'm afraid, and this disc didn't quite do that for me. I found many of the songs a little soulless — not because of this a cappella group, but because of their source material. I also found the production repetitive. For the first half of the song, let's hear the syllables in acousticky technicolor. Then we'll snap in some shiny '80s-esque studio wizardry to make the last few choruses stand out! It's an individually fun effect that loses its shine over the course of a whole disc. But enough whining on my part. These guys worked hard and deserve some high praise.

My favorite songs were shiny and '80s-esque all way through. Chariot had great charisma. Against All Odds is an actual '80s song, reproduced here with lovely fidelity. Ditto for Working for the Weekend, which rocked. My other standout was Used To Love U, which transitions to a cappella easily and often but is still a great song.

The other two standout tracks were more contemporary, less to my liking. Chicago earned a place in the Pink Floyd-Cold Play continuum of standout a cappella concept tracks, with that cohort's signature repetitive, ambient angst. Likewise, Feel Good Inc. was busy and grungy and would have been right at home on an Off the Beat album. Fair enough, have at.

Overall, this collection of songs hovers between good and great. If you're looking for some new tunes, it should interact nicely with the best that you've already got.

The Academical Village People explain that they've cleaned up for Learn to Interact. They write, "Now we make our beds in the morning, comb our hair, and most of us even brush our teeth." So maybe they really are a touch more refined, though that's hard to believe when they open with Larger than Life (now see here — are we being taken for a ride?!). Ah well, at least they still make crazy-fun, must-own albums.

There's a lotta' good and a bit of great on the latest release from the most-definitely-still-kooky group at UVA. Feel Good Inc. has nice vocal sensitivity for a number from the Gorillaz (love the soft "windmill, windmill, for the land" chorus), and some champion production decisions from James Gammon. I was also thrilled to hear a sweet version of Medicine. If only Guster would catch on in the a cappella circuit like Mr. Folds. And speaking of our Ben, Jason Sonnenschein covers him brilliantly on Not the Same.

On Academical is Not a Word, James East left me weak in the knees. I think it's time to sit now before I pass out. His hot rock voice destroys me on Chariot, and I dig the way he happily pounds through Working for the Weekend. Nuts, James graduated, huh? Here's hoping for solo work in his future. I could try to think of additional clever puns on "East" for potential album titles if it'd help jump-start his career.

So that's what's really great on Learn to Interact. Now, on to the less than really great. Move Along is too redundant (as is the original), and Used to Love U gets old fast. Plus, I also expected more over-the-top production (ala The Reason) on Against All Odds. You know, if I had my way and stuff.

But don't think for one minute that these gripes mean you shouldn't order Learn to Interact post-haste. It's still a darn fine album. And, despite their best efforts to convince us otherwise, I still think AVP is darn silly.

The cover art and liner notes of the Academical Village People's latest release, Learn to Interact, set the tone for the album's thirteen tracks. The album art isn't particularly impressive or professional looking, but the caricatures of the members and candid photos inside reveal that this is a group that has fun with what it does. This energy translates well to the album, even if the music itself is for the most part forgetful. Learn to Interact is one of those albums that just a few years ago would have been very good but now has to settle for marginally above average. Tuning and blend are good, and solos are good but not extraordinary. Apart from the strong energy, nothing stands out here.

When AVP is working at its best, the results are enjoyable. Move Along and Chicago, the album's strongest tracks, get a boost from innovative production (including a mesmerizing synth-like sound on the latter which I still can't figure out) and creative arrangements. Larger than Life and Working for the Weekend, both of which could have been major flops if not well executed, took on different feels from their respective originals and came off as fun to listen to.

However, once the metronome slows, things take a turn for the worse. The arrangements and soloists on Learn to Interact are not strong enough to sustain slower tracks like Not the Same and Windmills. Chariot, despite being fairly up-tempo, falls flat in an uncharacteristically lethargic effort that, like the original, fails to effectively utilize dynamic changes. Chasing Cars eludes this gloomy fate by slowly building throughout the track and during each line of the verse and ending powerfully.

After many listens, one thing continues to irk me about the arrangements on Learn to Interact: many of the songs on Learn to Interact come to screeching halts about two-thirds to three-quarters of the way through. More pronounced than just a bridge, the group will either cut out completely or special effect will be added to add some life to the song. And while this is customary in pop music, the mid-song shifts were especially prevalent and pronounced on this album. The first few times it's distinctive, but they quickly grow predictable — and knowing that everything interesting is behind me makes finishing the song almost seem unnecessary.

Learn to Interact is proof that AVP can produce some very good music, but is regrettably also evidence that the group is far from complete. Though proficient in creating likable, listenable music that highlights the strong energy of the group, it will not be until the group can vary their arranging styles and boast powerful soloists that they can put together a musically diverse, and therefore complete, album.