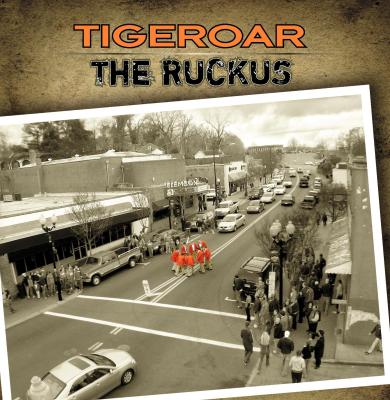 Those a cappella fans who live in the southeast have known for a long time that Tigeroar, an all-male group from Clemson University, is one of the best groups in the region. With the release of their seventh album The Ruckus, Tigeroar is ready to take on recognition nationally.

The Ruckus starts off with tremendous energy and then just won't quit. John Legend's Used to Love U seems like it was written solely to be the perfect a cappella album opener, and Tigeroar attacks this song with booming bass, kicking percussion, what the liner notes describe as "fly harmonies", and a great solo by Rob Monday. When I saw that the next track was Take Me Home by Phil Collins, I was ready to wince, but Tigeroar manages to turn this sometimes snoozer into a richly layered ballad. What follows is another great version of Feel Good, Inc. and the hits continue.

Tigeroar remains excellent throughout most of the 50 minutes of The Ruckus. A lot of love went into this album, and it seems much of that love went into the post-production end. The Ruckus sounds state-of-the-art, with all the bells and whistles one would possibly ask for and then some. These men tend to stick with an effect-heavy mix on the faster and harder tracks, complemented by slightly more organic presentation on the ballads. These men also have gobs of talent, and there's not a wrong note on the album. Everything sounds crisp, polished, professional and well executed. Energy stays high throughout. I was especially impressed with how much dynamic contrast crept through the heavily produced final product. Tigeroar is also blessed with a stable of svelte-voiced crooners who generate consistently high quality solos across the board.

Despite the many successes, there are still a few things holding Tigeroar back. The first is arrangements. Almost everything on The Ruckus is passable and there are some fine moments in many of the arrangements (I especially liked the transition in Your Love to (I Just) Died In Your Arms), but overall the arranging seems too conservative and too imitative to really impress me. The few throwaway tracks on the album, such as My Love and Ain't Too Proud to Beg, suffer from the poorest arrangements. A few songs are also a little over-busy for my taste, for instance What Hurts the Most. The end result is an album that is almost top-notch, but not quite there. Weeding out some of the weaker tracks and a bit more originality would serve Tigeroar quite well.

The Ruckus ends with a stunning performance of Numb and the metaphorical significance of the lyrics describing the rise of an unrecognized group as it gains street cred is not lost on me. As the chorus repeats about wanting "to become more like me and less like you" I can't help but see it as a challenge to the top echelon of collegiate a cappella groups. Considering how good this album is, that's a challenge I wouldn't take lightly.

You've heard the buzz: There are great things happening a cappella-wise at Clemson. Rumor has it the boys of Tigeroar have been working on a new album. And then you get the CD in the mail, and you're all jazzed up: Splashy liner notes, a kick-ass track listing that doesn't have a smattering of cliché (with the one minor exception of Rascal Flatts' What Hurts the Most), and the touch of the mix/master gods Bill Hare and Dave Sperandio. You pop the album into your stereo, drool with anticipation ...

... and find it meets nearly all expectations. To quote the album's opener, John Legend's Used to Love U, "Holla, holla, holla!" Deliciously smooth vocal textures paint a great soundscape with a solid solo by Rob Monday, layered with neat chime sounds, a not-too-heavy bass that propels the beat, and well-blended VP. In the very next song, the vocals swell with a wall of sound on the refrain Take Me Home, utilizing the full range of male register and producing an awesome effect. Lead Graydon Tomlinson's glissando on the last syllable of "remember" is only slightly awkward and doesn't feel effortless, but is soon forgotten behind the power and energy of his sound. I also really enjoyed the mellowness of Staticflow's Eliza, a subdued song that shows off Tigeroar's blend and dynamics mastery.

And major props to Tigeroar for choosing less often a cappella-cized pieces by groups whose more popular songs have been made over and over again. Speed of Sound by Coldplay, Feel Good, Inc. by the Gorillaz, and Woman by Maroon 5 are just three of the great tracks found here. What's more, they're all executed quite well, arranged with a strong diversity of styles and performed with a confidence that's neither cocky or arrogant. Feel Good, Inc. is a particularly smart track that highlights arranger Hunter Starling and the mixer's ability to recreate sound nuances heard in the original.

Only a few shortcomings to speak of on The Ruckus. Though an 80s favorite, Your Love overuses "dow" as a background power syllable, but it features a great tenor solo by Drew Cyphers (Dude. Coolest last name, ever.) that's unfortunately drowned out in the bridge. What Hurts the Most is a bit corny, although it utilizes a rather R&B-stylized intro and bass pattern during the chorus that I would have liked to hear more of. Finally, Ain't Too Proud To Beg's doo-wop quality feels a bit out of place on this rather pop-inclined collection.

They're not just yet the male a cappella powerhouses that their northern neighbors UNC Clefhangers and Duke Pitchforks are, but Clemson's Tigeroar is a slowly rising star. The Ruckus indicates a burgeoning talent that could come full-circle in their next release. After ten years of performing and taking a cue from their TakeNote sisters off their last release "Now That We Have Your Attention", the Clemson boys are announcing their entrée into serious a cappella recording with a substantial and noteworthy album.

Ah, Clemson Tigeroar. These guys, from what I hear, are kind of a big deal. Their concerts, as shown in a cool collage in the liner notes of their latest release The Ruckus, seem to be pretty spectacular. Photos show each member with his own wireless hand held mic on stage in a huge auditorium with full out lighting, choreography, and I think I even see a fog machine. These guys clearly do it up right, and when The Ruckus showed up in my mailbox I wondered how Tigeroar's spectacular stage show would translate to recording. I'm happy to report that it translates well. The Ruckus is every bit as dynamic and fun as their reputation, their liner photos, and even the title of the album suggest this group to be.

The energy on this recording starts high and stays there. Even the slowest tracks like Eliza and Chasing Cars have a bounce to them that keeps the flow of the album strong and consistent. In fact, the sweet vibe of Eliza made it one of my favorite tracks. There's also a nice dose of humor to be had, which I found to be very well employed and an asset to the fun spirit of the album (listen closely to the second verse of My Love for a snippet of another famous Timberlake tune).

The icing on this cake is a handful of really amazing soloists including Drew Cyphers, whose turn on Your Love by The Outfield soars wonderfully into the stratosphere. To their credit, there aren't any weak links up front to take focus away from the fun these guys are having as an ensemble.

The only criticism I'll offer is that parts of some of the R&B tracks sounded a little off compared to the rest of the songs on the album. I think this was mostly due to an approach that felt just a little stiff. Interestingly, it's this same approach that I think makes a lot of the rock tracks so tight. I just wanted more of a gear shift between the two styles.

Overall, I'd highly recommend this album to just about anyone. Fans of collegiate men's groups in particular, this album is basically a must have. It's definitely on par with Shedding and Abbeys Road in the top tier of all male a cappella.

To order this album, visit the group's website or CDBaby.com; the album is also available at the group's concerts.