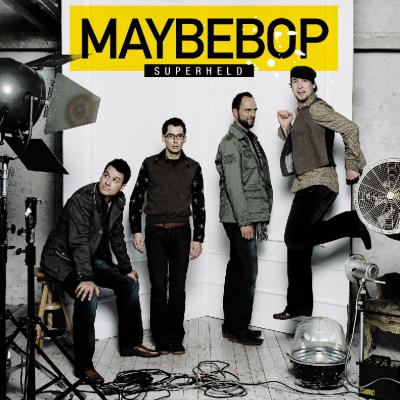 Maybe it's just coincidence, but I'm getting the distinct impression that Maybebop is taking my RARB reviews to heart. Superheld is exactly what this reviewer ordered, and then some. Their trademark graceful phrasing and artful arrangements remain fully intact. Their leads, formerly in a merely supportive role, have grown strong enough to take on a new dynamic prominence. And best of all, they've developed a clear, consistent stylistic identity. We were willing to follow them before as they bobbed and dipped into various genres. Now their jazz and classical influences inform and fuse with their upbeat, quirky German pop signature. Gone are the songs that sound like mere imitations of original artists. Gone are the noticeably accented English lyrics (or any English lyrics, actually). Superheld shines as distinctly Maybebop.

Superheld is sure to please fans, but it's worth owning for a cappella producers as well. It strikes one of the most successful balances between natural and electronic production in recent memory. Well-placed rock distortion and electronica effects make a perfect radio-ready bed for Maybebop's catchy melodies. Yet somehow these effects blend effortlessly with the quartet's warm, exposed voices, achieving jazz, pop and even occasionally classical tone colors. That's a tall order for any artist. Maybebop makes it sound easy.

Negatives? (Other than the monoglot's ethnocentric refrain ... ) Well, the guys should know that hidden tracks are more than a bit dated, and a little unbecoming a major label release (EMI) — at least now that the '90s are over. It's especially insensitive to today's mp3 listeners (almost everyone I know, for instance). If the track is good enough to make it on the CD (and this one is), then don't make listeners scroll through a separate song and a few minutes of silence to get to it.

Few artists bring so much elegance and artistry to pop music. Don't let the language barrier stop you from owning this one. Superheld is definitely one to hold on to.

Superheld takes fewer risks than past Maybebop albums (e.g., the techno tracks on Auf die Ohren), and the result is a consistent if slightly middle-of-road addition to their canon. Maybebop, the Deutscher dudes from Dusseldorf (alright, maybe I made that third alliteration up), are great singers — they just don't always sing great stuff.

Like Maybebop's last album Immer für Dich da!, Superheld is an hour of generally solid but unspectacular tracks. It's from no lack of effort on the group's part — production is excellent, voices are strong, energy is infectious. But the arrangements sometimes are too simplistic and the melodies too trite to let the songs really take wing. Maybebop varies the styling with mixed results; the classical fugue grafted onto Engel fell flat, and the jazzy Gute Nacht Freunde felt a bit disjointed from the rest of the tracklist. What Maybebop does well is boppy pop, which fortunately makes up most of the listening time.

This is the fifth album from Maybebop I've reviewed, and the first one without a single English-language cover. I find that Maybebop sounds uncomfortably out of their element when singing non-German tunes, so it was a treat to hear them perform confidently from start to finish. Oliver Gies contributes a number of originals here, with the title track standing out. I also liked the secret track Auf mich herab, which was a strong if hidden closer. A few more tracks like that would have made Superheld keep my attention a bit longer.

With their most recent release, Maybebop delivers a crisp, poppy album, easily fit for mass consumption and airplay.

The four-member vocal band creates a cohesive sound through solid singing and super clean production. Superheld is a quality product and well worth owning, English- and German-speaking fans of a cappella alike.

When I first listened through the album, it took me several tracks before I started feeling it. The two opening tracks, both written by baritone Oliver Gies (who produced most of the album), fall a bit short. Auch mal ran is a cheesy pop tune that sounds like it was arranged in the '90s. Its "bop, ba dop" seems perfectly suited to your average, knee-bopping college group. The title track, Superheld, shows promise in the chorus, but I just cannot get over the missed opportunity to really create something spacious and dramatic.

After another forgettable pop track, Maybebop starts rocking with Manchmal möchte ich schon mit dir. A badass bass line and a cool guitar riff immediately launch the album to a new level. With some of the best production choices on the album, these gentlemen create some incredible moments, reminiscent of groups like Queen and Radiohead.

Oddly, the middle of the album holds the most enjoyable tracks for me. Immer wieder sonntags showcases some excellent execution of jazz, percussion and instruments both, albeit rather elevator-esque. Maybebop puts its classical chops on display in Engel with some string quartet mimicry, complete with an incredible soaring countertenor. M F G is a sweet song to begin with, and the band does it justice. The tongue in cheek Lmaa (ha … "cheek") is less than subtle, but funny nonetheless.

The album closes with Blaue Augen and Gute Nacht Freunde, and though that order makes sense from a lyrical standpoint, the former absolutely eclipses the latter in every possible regard. I do not understand the hidden inclusion at the 9:00 mark of Gute Nacht Freunde.

Maybebop puts its best foot forward with the ballsier, more artistic tracks. The pop tunes are all okay, but I tire of the idiomatic voicings and the platitudinous distortion to the backs. I commend the group for the five originals, though none of them quite reach the level of their more adventurous covers — Manchmal, Engel, M F G, and Blaue Augen.