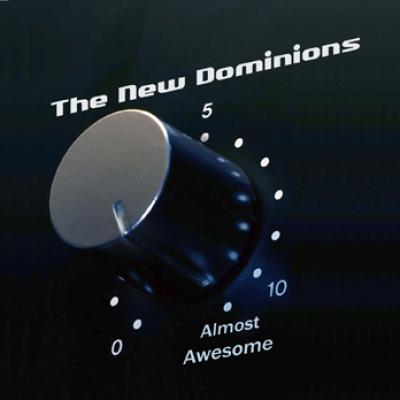 It was with some trepidation that I first popped the New Dominions's Almost Awesome into my CD player. A group choosing to name its album Almost Awesome is taking a calculated risk. Is the album truly almost awesome? How close to awesome is almost? Is this album over- or under-named?

After numerous rounds in my CD player, I think a better album name would be "Striving for Awesome". Colin Addis is the phenomenal arranger of 11 of the 13 tracks (and a great vocal percussionist). He develops lovingly textured arrangements that weave the New Dominions's voices together beautifully. The production strongly contributes to this, really letting the listener hear and enjoy Colin's creations.

The group performs these songs well, with high energy and a great blend. All of this sounds like the album is pretty awesome. The one thing making it "almost" (and this one thing is unfortunately absolutely necessary to the success of an album) is the soloists.

The opening track, My Favorite Game, has a solid start. It is energetic, with an interesting arrangement and a tight sound. Then the soloist begins. She is unfortunately flat throughout, dragging down what had started as a promising track. I'm not quite clear on why they chose to open with this one.

In Such Great Heights, Don't Stop Me Now, Sir Duke, Drive My Car, and Mr. Brightside the tenor soloists sing with lots of energy and very little control, particularly when they reach for the high notes. Fang on Eden is the most controlled tenor, but the song as a whole lacks the energy of the other songs, perhaps in part due to the non-Colin arrangement, and in another part due to a solo that is pleasant and controlled but lacking in punch.

Come on Eileen, one of the most overdone songs in a cappella, suffers from another non-Colin arrangement and a frenetic Save Ferris pace. The soloist gives it all of her energy, almost screaming the song (like the soloist on Sunday Morning), but the end result is a bit grating, like the opening vowel sounds: "bop bwah nop".

Some songs do qualify as pretty awesome. Down to the River to Pray is spare and beautiful, with a talented soloist who was (at the time of recording) one of the two youngest members of the group. I fully expect her to be featured prominently on their next album. Colin's solo track Love You Madly and Roam are nicely done, with a bouncy energy and a sense of fun. They close the album with Hallelujah, a beautiful song in and of itself, and they do it well. Chat's rich baritone and the song's ebbs and flows are dramatic but not overdone.

In the end, I have decided that the album is a bit misleading in its name. When taken in total, this is indeed almost awesome, but each track by itself is either awesome or not.

The vibe is all out of whack for 90% of the album. The song selections consist of classics — Queen, Stevie Wonder, Beatles — and "modern a cappella classics" — Postal Service, Guster, Rufus Wainwright — as well as a smattering of the semi-popular-but-mostly-forgotten — No Doubt, Cake, The Killers.

The problem with the first group is that for the most part, the New Dominions fail to really do justice to the originals. Though Don't Stop Me Now displays the highest energy on the album, it still falls short of the epic, Queen proportions. For the songs in the second group, there is simply nothing new or ear-catching to set the Dominions's recordings apart from the multitudinous other a cappella covers of the same songs. The songs in the third group are not good songs, and the arrangements do nothing to palliate them.

The most pervasive problem is syllable choice, one of the most common offenders in the collegiate a cappella sphere. Syllables and notes should work together, but it is obvious to me that all these arrangements were first transcribed — notes plugged into notation software, to which syllables were added. The resulting lack of melodic harmony and phrasing becomes tiresome after a track or two.

Many of the soloists sound rather juvenile in tone and execution, though Eunice Lee and Lauren Hayden turn in a solid duet on Roam.

There are a few oversights in the production. The messy editing on Down to the River to Pray, including chopped breaths and overlooked lip-smacks, coupled with an inappropriate reverb and an overly-tuned lead, squander the simple vitality of the melody. Several of the songs, including My Favorite Game, Down to the River to Pray, Sunday Morning, and Mr. Brightside, are too treble-heavy for my taste.

A more appropriate title for the UVA New Dominions's album might be "A Third Awesome". Though most of the album flounders, the first third of the album (with the exception of the overdone Such Great Heights) is exciting, original, well-crafted, and beautifully sung. My Favorite Game is a perfect opener, and the dynamics of the bass/tenor harmonies at the end of each chorus manage to be both gorgeous and grungy. On Down to the River to Pray, it's a wonderful choice to allow Jessica Drennon to sing the first 30 seconds of the song without backing. The slight echo on her flawless mezzo voice is warm and welcoming. As the song builds, Ms. Drennon moves with it, and each repetition of the line "Oh, sinners, let's go down" proves that the best soloists can project without sacrificing tone or control. At the end of this streak of greatness is Love You Madly a fun track with a killer bass line that pulls off the idiosyncratic Cake sound like few a cappella covers can.

The New Dominions keep the energy high, but song choices on the rest of album are much too outdated and overdone for my taste. A lackluster performance of No Doubt's Sunday Morning is followed by selections from Queen, Stevie Wonder, The B-52's, and the Beatles, among others. Roam's pleasant solo and the richness of the block help the track stand out from the pack, but even the most solid performance of a song forever in heavy rotation on adult contemporary radio won't make an impression. If you can't seek out these artists's lesser-known gems, why not put a new spin on the overplayed? Unfortunately, there are no surprises here. It's also a shame that the songs that are less familiar to the Top 40 crowd (Eden, Hallelujah) seem to have been granted less studio time. They take on a sound reminiscent of BOCA 2001. It's a lovely, natural sound, but next to balanced, super-tuned songs like Drive My Car, the raw sound appears to be less an intentional decision and more a result of neglect.

There are some beautiful voices and promising arrangements on this album, but if the UVA Dominions want to break out of the box, they'll need to take a good look at their track list next time around. I'd like to see them strive for novelty. It won't be a difficult task, since it's already where they sound their best.