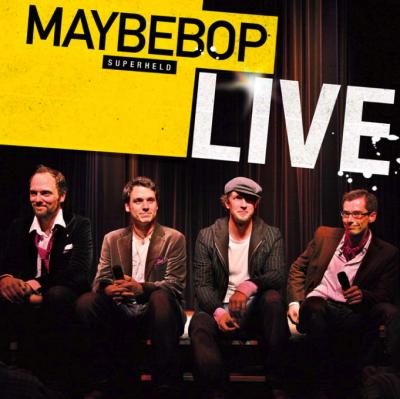 My past reviews of Maybebop are loaded with more praise than Sunday morning in the Bible belt. These guys are great. Their musicality and creativity infuse this artform with life in a way that ensembles do. Superheld Live is still impressive, but it's likely to underwhelm fans who've grown accustomed to a richer, more layered and more sonically pristine soundscape. Perhaps it's a testament to the energy captured by past recordings that Superheld Live does not quite make up in energy what it loses in sonic character. (For an example of when live energy does make the difference compare Maybebop to fellow Europeans Rock4). But despite falling just short of themselves, Maybebop continues to blow away just about everyone else. This is an excellent recording and like so many Maybebop releases, one that I recommend wholeheartedly.

Now I have been told by a German-speaking friend that Maybebop's humor plays a major role in appreciating them. As a result, one would expect to hear audience laughter on these live tracks. And several tracks do indeed deliver. From the distant hint of laughter on Seifenspender to some outright hysterical shrieks on Poesie and Kacktus (which vocal timbre alone reveal as obviously humorous) Maybebop does indeed get the laughs.

Maybebop's best strength is as an ensemble: gorgeous unisons, heavenly blend and phrasing of the highest calibre. Applying these classical elements to rock and jazz music gives Maybebop an unusual vibrancy.

My scores usually reflect just how much of Maybebop's strengths they've chosen to highlight on a given track, rather than any particular failings. But a few tracks deserve special mention.

Birdland was a great listen but a tough one to score. One the one hand, the phrasing on the section beginning with "Bird heard it.." (and several other sections, actually) is perfection itself, bringing chills and even a bit of a tear on listen after listen. But on the other hand, the scat and solos aren't up to the caliber of The Manhattan Transfer, to whom much is owed in the arrangement. In the end, the rarity of that strong a reaction pushed the score to a 5.

You Can Call Me Al wasn't the best choice for Maybebop. The word-smithery of Paul Simon presents quite the challenge to these singers. Maybebop reveals accents and odd phrasings thick enough to distract native English speakers (something of an ongoing danger when Maybebop attempts English lyrics). If this wasn't enough, the arrangement is a bit of a meandering mess. The joke here is supposed to be a scat that gets away from the singer. (That joke, we get in any language). But the scat is never performed well enough to convince us that its loss is just a joke. The moment is perhaps Maybebop's most amateur. Only the group's innate musicality saves the track from a lower score.

In the end, one is left not with a flawless recording, but nonetheless with an excellent one. Fans and German-speakers can finally hear the crowd reacting to the jokes. The rest of us can enjoy some of the best singing out there.

Live albums can be a bit like Broadway dramas starring television or movie actors, a bid for artistic credibility that fails if the performer turns out to lack any artistic capability. And so I always listen to live albums with the tiniest bit of schadenfreude, wondering if the singer(s) really has the vocal chops that studio magic can so easily substitute for.

Superheld Live, the (obviously) live album from German pop quartet Maybebop, runs the listener through a remarkable range of sounds, from Bobs-like humor (the frantic Seifenspender, the goth-dramatic Kacktus) to high-energy crowd-pleasers (bop-along Oberlippenbart and Durchschnitt) to beautifully layered, complex pieces (Engel and Auf mich herab). Some will engage you more than others depending on your tastes, but you will likely be struck by the absolutely exquisite vocal control that Maybebop wields throughout. At times I simply couldn't believe this was a live album, from the interwoven whispers that open Blaue Augen to the perfectly balanced harmonies on the choruses of Birdland. And to my ears, Maybebop has a warmth and humanity in performance that somehow engages and endears the listener more than their admittedly excellent studio work.

There are moments where I'd like to hear Maybebop push their instruments a bit further (e.g., they could rip far more than we heard on the cutesy You Can Call Me Al). But that's a small complaint, one I'm more than happy to dismiss in light of the simple listening pleasures that Superheld Live offers. Maybebop can really sing, sans studio and safety net, but I'd suggest you hear it for yourself.

While I wasn't a complete fan at first, Maybebop's new album Superheld Live won me over in the end. It's an excellent album by a terrific group. The songs were generally lively and entertaining, and (for those who understand the German) often quite humorous.

I personally am only a so-so German speaker these days; therefore my ratings were assigned mainly without regard to the lyrics. However, with that decision I feel like I'm doing the album an injustice. Fortunately, they've included lyrics to nearly all the German songs, so English-speaking listeners who care can probably figure out what's going on in the songs, with some patience and the help of an online translator.

Just an example of their humor before I proceed, though: the song Seifenspender is apparently about a guy who is stressed out in the supermarket because he can't figure out how to use the soap dispenser in the bathroom (my own translation): "And so I grabbed the pink plastic part of the soap dispenser. How does it work? Should I press, pull, screw, or squeeze? Caress or punch, dry or dampen? I want soap! I don't understand; I've forgotten how to use it. The small pink part is starting to really stress me out! Why are there so dang many different types of soap dispensers in public bathrooms?" Clever, funny stuff!

Similarly, they've got a song about a mustache (Oberlippenbart: "I've been trying to persuade you for years to get rid of your porn-stache"), and a song about how it would be nice to be average (Durchschnitt: "Instead of such a chick-magnet"). On the other hand, at least one of the songs (Kactus) went completely over my head both, lyric-wise and music-wise. Perhaps it would make more sense to a native German. I should mention that about half the tracks on the album, including most of the humorous ones, were written in whole or in part by baritone Oliver Gies. Kudos to his creativity!

The majority of the tracks are really good — and when Maybebop is good, they are really good. I thought they struck a nice combination between mellow and energetic. Some of my favorite songs were mellow — Die Gedanken sind frei ("Thoughts Are Free"), and Alles was ich sehen will ("Everything I Want To See"). These were terrific: very clean musically and with meaningful, serious lyrics. Last time I listened to the album, the tune of Die Gedanken sind frei got stuck in my head. Twice. The music quality was so high that it was hard to believe this was a live and not a studio recording. I especially liked the vocal horn effect midway through the song.

Now for the low points: the two songs sung in English were among the weakest ones on the album. You Can Call Me Al, was my least favorite track of all. I thought it was a horrible arrangement (sorry, Oliver!). Both soloists, Jan and Sebastian, sounded a bit off. This is a shame because both of them sounded great on most of the other tracks. Sebastian, the bass soloist, made me literally cringe when he came in with a solo midway through the song: he had a horribly accented voice, and sang a lot of the solo out of tune. He also messed up some of the lyrics, for example singing "roly poly little black-faced girl" instead of "bat-faced girl"; "black-face" of course has a very different meaning. I thought the bass did a much better job on the instrumental-like solo at the end of the piece, although the high-pitched instrumental solo (by Jan?) in the middle was pretty awful. Might have been entertaining in concert though; the audience responded well enough. The other English song, Birdland wasn't quite as bad, but suffered from some of the same problems: the bass solo was at times out of tune, and the accented English made the word sound like "Birdlynn" instead of Birdland a good chunk of the time.

The group blends very well together, aside from the problems mentioned above. The soloists generally are good, but not remarkable. Overall, I give this album a 4. If I were a native German speaker, however, I'd likely put this album on my "must have" list.