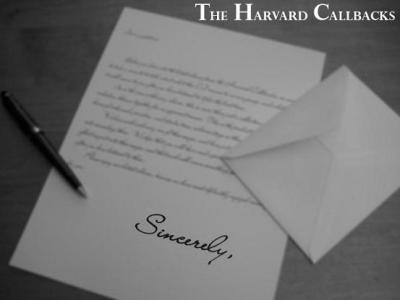 Sincerely, is a quintessentially blasé album. It elicits neither derision nor excitement. It's pleasant, but not overly so, and no more or no less than most collegiate albums out there.

The main problem is energy. It's not that there's a lack of energy; rather, the level of energy is so static throughout the album that it just doesn't sweep the listener up. The Callbacks have always found their groove in jazzy or R&B fare. On Sincerely, the groove doesn't go anywhere. Track after track of mid-tempo sameness sounds cool, but rarely elevates itself above background music. Even the tour de force that is Bon Jovi fails to really move the listener.

Production adds to the lack of energy. Percussion is typically mixed far back. Bass is thunderous, often drowning out everything but the lead. The album takes the pyramid principle of singing (heavy on the bottom part, light on the top parts) to an entire new level. I often felt I was listening to an all-male group. The few times the sopranos do put in an appearance, their lack of tonal focus and their chewy diction sticks out of the texture like a sore thumb. The chorus on Woman is a prime example.

This isn't to say the Callbacks don't hit their stride. When they are on, they present a rich sonic palette, fine arrangements backed by fine singing. The opener, What Goes Around..., is a handsome example, especially with the leave-nothing-on-the-table solo by K'idar Miller. Despite the aforementioned problems with the trebles, Woman also finds a slickness that compels. The problem is, the rest of the material is take-it-or-leave-it.

At first glance, it might look like the Harvard Callbacks are on a downward trajectory. After all, I gave 9 to 5: The Late Sessions a five, then ...and three wishes a four. Now their latest manages a three. The Callbacks are nearly as good as ever. The problem is, everyone else has managed to catch up, and now the Callbacks just sounds average.

Sincerely, is the latest album from the Harvard Callbacks, and grooves with a smooth energy — like kicking back on a warm summer evening. Make no mistake, the Callbacks are still a pop/R&B group, and they have the chops to make that material shine. They play well to their strengths and, save for a couple small missteps, pick songs that give this album a sense of consistency, class, and style.

A quick glance at past reviews shows that the Callbacks have been on an upward trend from the beginning, and this album is no exception. Soloists? Still stellar. The weakest singers are still average or above for the collegiate scene. So too are their arrangements which are all well textured and cohesive despite being contributed by several group members. The pool of talent bodes well for the future of this group.

The production here is good, but bottom heavy, and leans toward the natural, which could be seen as either help or a hindrance. On the one hand, purists will appreciate the minimal tuning and lack of studio effects. On the other hand, heavy tuning and studio effects are increasingly becoming the hallmark of the R&B genre that the Callbacks call their own. I wouldn't fault a listener for missing them in these interpretations. My perceptions landed somewhere in the middle of these two extremes. I respect and applaud the Callbacks for not replacing things like natural dynamics and textured arranging with studio bells and whistles, but I think to raise the bar they're going to have to continue to find subtle ways to use the studio to accentuate their talents.

A good place to start would be clearing up some of the mud in the aforementioned bottom heavy low end. Some of these tunes and arrangements call for pristine upper vocals, and backing off the low octave a bit might keep those voices from getting lost in the mix. Vocally the Callbacks have the R&B style well in hand, now their production just needs to meet them halfway. This group has been called out before for missing a song choice or two, and I'm happy to report that I have only one song to quibble with here. Livin' On A Prayer to me doesn't match the tone set by the rest of the album. In a way the Callbacks acknowledge this themselves, slipping into Madonna halfway through. Next time I'd skip the rock tune, or change it up completely so that it grooves with the album.

Though perhaps still a hair away from greatness, the Callbacks demonstrate a sound here worthy of respect, and one that I'm sure they will continue to refine to perfection. I'm surprised that there isn't more buzz surrounding this group, since they're certainly a standout from what I've heard on the Harvard a cappella scene. If pop/R&B is your thing, you won't be disappointed in this album.

The Harvard Callbacks are a talented group of singers. Their newest effort, Sincerely,, does a nice job of showing off their talents and their surrounding talents, too. From soloists, to arrangements and song choices, to the production help they call upon (Futura Productions in New England), everything comes together like a succinctly well-balanced recipe. Nothing outshines or overpowers the other and the listener is left with a quality meal.

What Goes Around... and Put Your Records On are the best tracks here, leading off the album with a standard that is difficult for the Callbacks to hold up through the remaining tracks. Fortunately, the drop off isn't huge and the rest of the album is nearly as enjoyable. K'idar Miller and Skyler Johnson really shine on these remakes of Justin Timberlake and Corinne Bailey Rae with an ease that speaks to their confidence in the Callbacks as a whole. In fact, all of the soloists are fantastic on this album.

Throughout Sincerely, there's nothing gimmicky. Underneath the sheen of a production that is clearly set out to let the Callbacks do their thing, the album is comfortable to the ear from start to finish. Groups in the New England area should certainly check out this studio for future albums. Initially I was left thinking, "Really? No Bill Hare, Tat Tong, or Dave Sperandio?". I'm happy to see other studios making quality a cappella recordings as it ultimately helps every group in the long run to realize their albums.

Arranging is more circa BOCA 1997, which is a plus in this reviewer's ears. I can actually hear some of the backing voices singing lyrics instead of syllables from time to time. Brilliant! Well, not really. Refreshing? Certainly. Each track has the right balance of rhythmic and chordal support for the listener to immerse themselves.

Weaknesses? The Callbacks do R&B very well but an album (or concert) chock full of these song choices can lull the listener into a safe, neatly arranged cocoon of the mid-tempo R&B groove. Even their cover of Frankie Valli's Can't Take My Eyes Off Of You is infused with a head-bopping rhythmic slow-down of the Four Season's 1967 single (which I was very excited to hear). It suits the Harvard Callbacks, but can cause an audience to get sleepy if they're not careful. Honestly, it's hard for me to get through the entire album from start to finish. This is not a correlation to the level of talent on the album, but rather to the average tempo of songs and length of the album. Two six-song EPs may be something for the Callbacks to think about in the future.

The greatest compliment I can give Sincerely, is that the finger I use to click "next" with is relaxed and content to sit idly by once the CD is popped in. The album is consistently very good from start to finish. Keep up the good work Callbacks!