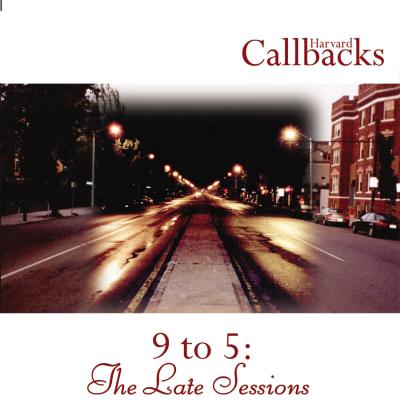 This album is a major step forward for The Harvard Callbacks from their previous release, Don't Look Down. The Callbacks have improved in almost every category with this release. They should be nothing but proud of this effort.

As controversial as this subject is, it's the production that really shines and puts this album onto its perch above the rest. The talent of the group is obvious, but the production highlights their strengths and improves their weaknesses. This album proves that there is no replacement for a talented engineer and a creative set of minds.

I wasn't a big fan of Where the Party At, and especially not for a lead track on the album. It's a tough song to pull off in an a cappella setting, and though the effort was there, I just never felt that this one settled into a home like the other tracks on the album. There also seemed to be a lot more pitch issues in the background voices on this track than on the others.

The female soloists in this group really outshine the men on the microphone. Christina Vargas on 6 Underground, Erika Rhone on St. Theresa, and Sasha Haines-Stiles on Princes Familiar were extremely solid. All three sang with such raw emotion and guts. I love hearing soloists like this ... it just doesn't get much better.

Okay, okay ... the guys did have someone that held up for those with Y chromosomes. Aaron Joachim deserves a lot of credit for his solo effort on Gone. The reason I choose to mention him is because he intelligently decided to be himself instead of Justin Timberlake on this song. He sang the solo very controlled and within himself. Had he tried to mimic the original solo, I fear we may have had a much different outcome.

Across the board, this is a very good album. Two steps ahead of the rest, and well on the way to a cappella stardom.

The Harvard Callbacks' 9 to 5 is really good. It is a soulful, pumping, R&B-themed album from a Harvard a cappella group. No doo-wop or jazz standards for this group — they fill their tracks with Wyclef Jean and Nelly and do it with credibility.

The production is in the vein of Gabe Rutman: heavy percussion, many effects, and a free hand with the Pro Tools. Like it or not, this is the kind of production that equals award-winning albums. The Callbacks have earned a well-deserved nomination for Best Mixed Collegiate Album in this year's CARAs.

Two members of the group contribute original pieces to the album. The original tracks are quite good for a collegiate group. The arranging overall is decent. Nothing outstanding, but there are not a lot of pretty chords in their type of music, which they do quite well.

One nitpicky thing: There was an odd "na na na" old style radio effect intro to Gone. Perhaps if different vowel sounds had been chosen, it might have worked. Nevertheless, those first few seconds could have been cut no problem.

One big mistake: closing the album with As was a bad choice. The group should have cut the song entirely. The solo is too low for the male soloist. He is off pitch throughout the song and does not hit the lowest notes at all. The female soloist is much better, but at times gets thrown off when the two overlap.

The Harvard Callbacks' recent release, 9 to 5: The Late Sessions, starts with a bang and keeps it coming the entire time. Covering several genres, the album tackles many of the things contemporary collegiate a cappella has come to embody. Most impressive, however, and in contrast to most of the contemporary collegiate a cappella scene, is that The Callbacks do it all well.

To put it bluntly, I was amazed by this album. The quality was apparent from the get-go, with a rendition of Where the Party At. While it didn't capture the full essence of the original (it is Jagged Edge…), I appreciated the excellent arrangement, the energy of the soloists, and the fact they attempted to cover the song (not to mention the orgasmic scream in the first five seconds…nice work!).

After an opening like that, I wasn't expecting it to get better — but it did. The album doesn't seem to have a crest, it is just consistently excellent. The reasons for this are myriad. The most important aspect of their success is their arrangements. They are constantly moving, with intricate inner voicing, and dynamic use of syllables and interweaving of different songs. Matt Thompson has many of the arranging credits, and he deserves many of the kudos for this album. The production is also superb. The group is able to sound great on more organic-sounding tracks, such as Don't Even Know, but then turn it around to vocal band style in richly produced tunes such as Poor Furious Lover. The majority of the album is somewhere in between. I especially love the basses, who have been mixed with a certain dullness but stereophonic ubiquity that keeps the toes tapping, and that makes them sound just like an upright. Also fantastic is the percussion, which is skillful and appropriate without exception, especially on Get Gone. Another innovation I appreciated was the original songs, well written and showing off another aspect of the musicality of the group.

Where should The Callbacks go from here? The weakest aspects of the album are tuning and soloists, which for the most part are up to par with the rest of the album but at times falter. Many of the women soloists appear to be straining at the bottom of their ranges (for example, 6 Underground or Princes Familiar). At times, imitation of the original soloist works well for the group, as in Where the Party At. However sometimes this imitation serves them wrong, as in Gone 'til November, in which Thompson spends trying too much to sound like Wyclef. There are occasional pitch problems as well, especially among the upper women's parts (for example, the sustained high notes of Poor Furious Lover, which at times are a little under).

These problems are minor, however, and stand out only because the rest of the album is so great. I guess most importantly, The Late Sessions is a pleasure to listen to, and an album which may take up residence in slot five of my disc changer.

To order for delivery within the US, send a check for $18 to:

To have a CD sent outside the US, contact the group by email at c-backs@hcs.harvard.edu for pricing information.
×