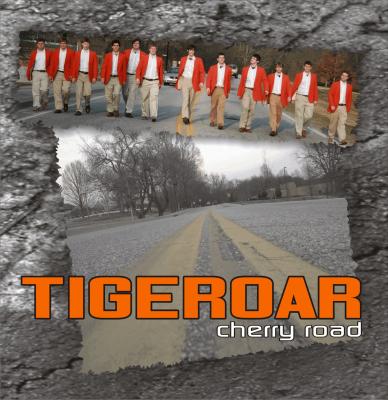 Clemson Tigeroar's Cherry Road is undeniably good. I'm not just saying that because they included a bribe with their album (a Tigeroar bumper sticker). There isn't a sour note on the album. The soloists are of very high caliber and execute flawlessly. The arrangements are simple but full and performed with panache. The energy is high. The production is spot on. I enjoyed listening.

But something is lacking and I can't quite put my finger on it. There are times when a cappella can be magical. Your jaw drops. Your eyes close. You inhale the music like air and make everyone you know listen, too. Tigeroar has all the components to make that magic happen, but somehow it just isn't there.

Maybe it is the mishmash in the song choices. They go from Earth, Wind & Fire to Coldplay to Amos Lee (a country ballad called Southern Girl, the low point on the album). Some groups manage to throw in every genre out there and still have a cohesive album. Cherry Road comes across as more of a mixed tape.

Give it a listen. Maybe the magic will happen for you.

Side note to the graphic designer: tiny white text on a mottled grey and white background makes for difficult reading. I gave up after the first few lines.

Tigeroar is like a regional liberal arts college: solid, well-respected around the area, but not getting much attention on the national scene. Hopefully Cherry Road will change that; its high quality clearly illustrates these men from Clemson are a force to be reckoned with.

Cherry Road starts where The Ruckus (the group's previous release) left off. Slick production, booming bass, kicking percussion, and an overall sense of polish dominate. It's a good thing the liner notes carry the nota bene "every sound on this CD was made by a voice", as I doubt the casual listener would make that initial assumption. Singing is still high quality, and Tigeroar has upped their game in the arranging department, especially with the prolific Drew Syphers and Hunter Starling (who even pens an original contribution).

One of my favorite things about Tigeroar is their ability to excel in multiple genres. The first six tracks on Cherry Road — which are the best — clearly illustrate the group's versatility. Let's Groove is pure brilliance, and a fantastic opener; Tigeroar has captured the funky energy of the original perfectly. Whereas Let's Groove is a four-minute all-out aural energy assault, Viva La Vida showcases the nuance on a more controlled rock track, with some nice sibilance to push the energy and a great sense of build and momentum. Amos Lee's Southern Girl is downright delicate, slightly overproduced in the bass but still charming. If I Never See Your Face Again captures that Maroon 5 feel well, though its overall quality doesn't live up to its track neighbors. Waiting For A Girl has a silky, sultry feel layered with some nice effects and a fantastic solo. Shadow of the Day is all about ambiance and build, and the hyper-produced climax fits in well with the feel of the song.

Unfortunately, Tigeroar could have stopped there; most of the album's latter half is downhill. In particular, I felt the production becoming more gimmicky than insightful. Still The One loses the doo-wop feel of the original (but still has a great solo). Stronger sounds incoherent and the groove never clicks. Where I enjoyed the pounding bass earlier on the album, it overwhelms Feel It (In The Air Tonight). With You and Change The World are snoozers. The one saving grace on the back end is the original track Waiting For You, a well-written track with cool harmonies and nice energy, though a bit too busy in the block.

Cherry Road showcase a talented and dedicated group, and features many tracks that stand up to the best material coming from collegiate groups. Further, Cherry Road shows that the critical success of The Ruckus was no fluke. If Tigeroar can keep up the consistency, it will surely move from a regional to a national success.

Have you ever heard an album that sounds pretty good, but it just doesn't stick with you, and you can't point at any obvious reason why not? Cherry Road is that album for me: it's a pleasant listen, but it just feels like there's something missing. The men in Tigeroar sound as though they're focusing so much on hitting the right notes and blend that they've forgotten to perform these songs, which in turn makes the recording sound flat. Any brief clip of any song here would certainly sound great out of context, but most of these songs never seem to go anywhere.

Here's an example. There's a moment in the last thirty seconds of With You where the group builds beautifully behind soloist Gary Fuller's booming cry of "What I feel when I'm with you, with you, with you, with you, with you, girl" — only he pulls that final "girl" back to a pleading whisper. And it works exceptionally well — almost too well, as he packs more emotion in that one cracking, broken word than into the rest of the song. From a technical standpoint, there's nothing wrong with the track: there are no blatant missed notes, solo harmonies add a nice depth to certain key phrases, the "zhh-zhh" background line revs with the energy of a car motor, and so on. But the recording just sounds lifeless, as if they polished all of the energy and passion straight out of the song.

It's a constant problem on Cherry Road. Let's Groove has a fantastic, catchy bass line, but the song doesn't build or change from one section to another, and they might as well have just copy-and-pasted their backgrounds for every verse and chorus. The group's version of the Naturally Seven update to Feel It (In The Air Tonight) works well (although it is a bit lacking in innovation just to copy another group's incredibly recognizable cover). And it's certainly clever for these guys to weave in a snippet of Stronger at the end, leading immediately into their cover of that song. But I wish they'd just done something more with it. Stronger is a weak a cappella song in general, and it falls flat here. Even its climactic end which returns to Feel It (In The Air Tonight) does little to redeem the arrangement. They could have merged the two songs together into one track to make their intentions more clear (given the smooth, seamless transition, it's odd for them to have this be a separate track). They could have shortened the Stronger bit to tie it back into Feel It (In The Air Tonight) faster. They could have made Feel It (In The Air Tonight) a bit shorter and launched into some other song that would've blown us all away. But as it stands, these two songs feel like a really, really good rough draft: you can tell that there are some cool ideas just beneath the surface, but the group needs to spend more time developing them into a truly incredible arrangement and song.

Even with these weaknesses, though, there are still a few enjoyable moments here. On Waiting For A Girl (which is inexplicably the only song on the album whose original artist is not credited in the liner notes), the group makes good use of dynamics — not just from each verse into a chorus, but within a phrase in the backing voices. It adds a compelling intensity to the arrangement that kept my attention in ways that most of the other tracks here didn't. Sure, they could've pushed it farther (this is, after all, a Foreigner song!), but thankfully they didn't overdo it. Similarly, Southern Girl's understated arrangement and soloist Ken Brown's charmingly supple voice make the song a highlight of the album. It's these moments that reveal the heart that Tigeroar holds beneath its technically precise surface; the group just needs to learn to wear it a bit more on its sleeve.