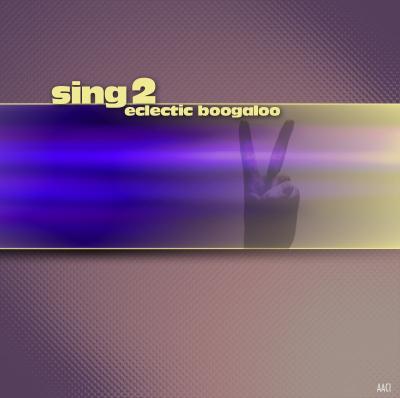 When Sing, the first album from AACI, was released, there was a certain quaintness to a CD that placed particular emphasis on a cappella groups coming from the sometimes-neglected southeastern portion of the United States — and it was a great album to boot. With Sing 2: Eclectic Boogaloo, that unifying gimmick is gone but the CD is even better so it's not missed, even if one does wonder a bit if AACI isn't trying too come up with its own BOCA + CARA all rolled into one.

But forget my philosophical musings and BUY THIS ALBUM NOW. Not quite sure what else I can say that will convince you except that as a "Best of" CD, which this essentially is, there are few better. The few 4's you see above might just have easily been low 5's and there really isn't a single track — with the possible exception of the cute, but tediously one-joke and over-long I Hate Mosquitos — that won't entertain you.

As I did last time, just a few random musings to share in no particular order:

Sing 2 includes one-liners with each track, offering some form of complement — sometimes it's a bit too hyped, and something it's not 100% accurate but in the spirit of that technique I leave you with a one-line review of my own:

Sing 2 marks the return of this nascent compilation series, but this time Dave Sperandio opens up the palace gates to include other producers (and subsequently a wider representation of groups beyond the Southeast US).

Mmm, there is some good music here. I love the soaring solo and joyous energy of the opener Kyrie. I adore the Appalachian pathos of You Dance (shout-out to John Clark — way to spread the love and share the 'Mates arranging style!) I tear up at the return of legendary Vox One with a shining original that was worth the multiyear wait. I even like the "this one is not like the other ones" modern piece by Joseph Bates.

The problem? I couldn't stand moments like these back to back, much less when they are interspersed with far less successful tracks. Listening to Sing 2 is an auditory pinball game, and richocheting from collegiate pop cover to humorous original to jazz and back again leaves the listener with whiplash rather than wow-factor. While I theoretically applaud Sperandio's inclusiveness, the introduction of varying production approaches and styles only exacerbates the stylistic variance and detracts from the enjoyment you should get from any one of the gems that litter this disc. Expanding the tracklist from fifteen songs to twenty didn't help either, although again I can't fault the spirit behind it.

Having been quite the mix tape fiend back in high school, I have strong feelings about compilations and their need to have a consistent thematic or stylistic thread to hold them together. Those who can dance the "eclectic boogaloo" better than me might find Sing 2 a good listen; the rest of you should find the individual albums attached to the "5"-rated tracks here for a bit of a smoother ride.

I haven't had this much fun reviewing an a cappella album in a long time.

To review an album, I listen for themes of strength or weakness. I then express my impressions in ways that I hope interest people who have no stake in the album. This is my vain attempt to raise the quality of the world's a cappella and in doing so, leave a legacy.

But how do you offer coherent feedback to twenty groups on an album of twenty songs that spans genres, genders, and moods and that ranges from high school to professional experience? After 58 reviews, my first compilation album rendered my usual m.o. useless.*

Fortunately, there is a theme and an untheme to Eclectic Boogaloo. As a work, there is no common thread to the album. The liner notes provide spirited comments highlighting the best qualities of each song, but they don't explain a song selection criteria that would frame the album. The Alliance for A Cappella Initiatives explains only that it is dedicated to advancing a cappella, partly through funds raised by sales of the Sing series albums. An explicit rationale would be helpful to understanding the album as a whole.

The major theme of Sing 2: Eclectic Boogaloo is audible excellence.

All the songs on Sing 2 are sung with absolute conviction; the energy spills off the edges of the CD. As a reviewer who often rails against the impersonal stamp of modern a cappella tracking, I was delighted to hear passionate solos and lively backgrounds on nearly every track. My favorite moments include: the electrifying yet simple '80s key change of Kyrie, the expressive variations in the soloist's tone in I Fall, the indescribable feel of the intro to You Dance and its amazingly complementary solo voices, the tension of minimalism in the Creep arrangement, the alluring scariness of the biker chick in Faster, Faster, the way Blues in the Night simultaneously conjures Ella and Aretha, the wacky fervor of I Hate Mosquitos, the unsettling chords in the chorus solo harmonies of You Know, the driven pacing and movement of Amsterdam, the "sell it" spirit of Do You Love Me?, the in-your-face personality poured into Yeah!, and the alarming explosion into Paranoid Android's bridge.

A lesser theme of the album is that it contains the rockin'-est all-female a cappella I've ever heard. The quality femme theme may not surprise some a cappella fans, but I've not had the chance to hear mythical lady rockers like the Loreleis and Divisi until now. The energy, arranging, mixing, and quality of the all-women recordings on this album is way beyond anything all female that I've heard before. Divisi's pure charisma and top quality arranging and mixing makes them the female answer to the Tufts Beelzebubs. Yeah! has a guaranteed spot in my a cappella dance mix. The Elon Sweet Signatures nailed the pacing and builds throughout Amsterdam but need a little honing on their studio work. The Loreleis' Vindicated is a neat approach to the Dashboard Confessional song, preserving some of the rawness of the original. The UNCG Sapphires cover Linkin Park's Numb with unexpected impact, though the track still feels a little reserved in the choruses.

Every track of Sing 2: Eclectic Boogaloo left me curious to learn more about each group and wanting to hear more. I can't think of a much higher compliment for a sampler album, and I think AACI is well on its way to advancing a cappella.

*Because none of these groups has the benefit of a full review, my review notes are posted on the RARB forum's Community Reviews section.