The Sound of Singing on Jazzchor Freiburg’s Schwing! 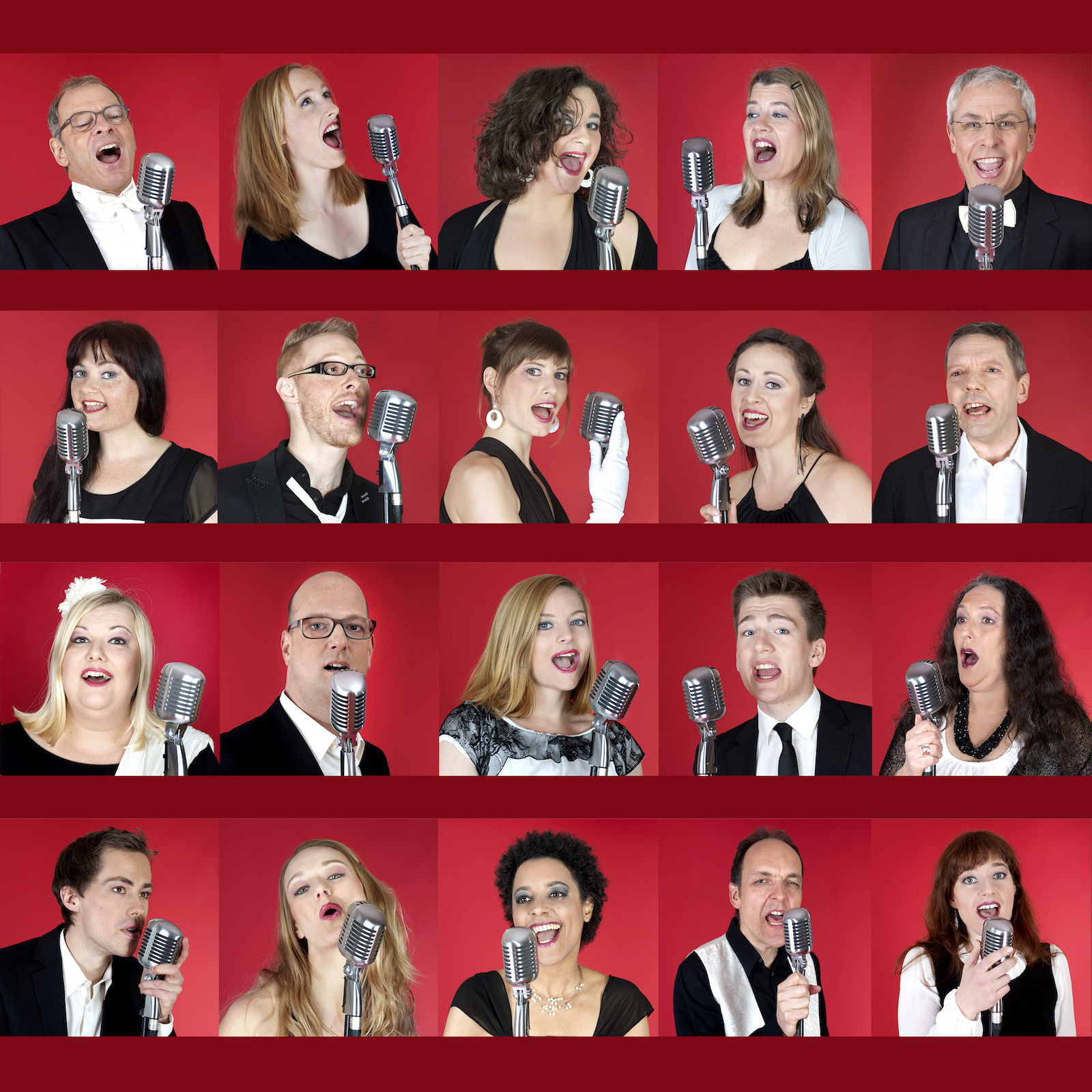 How does the sound of singing shape a song? In a cappella, the sound of singing is omnipotent. We sing rhythm with the staccato sounds of onomatopoeic syllables; ambiance with the resonant sounds of "hum"s, "oo"s, "oh"s, and "ah"s; melodies and harmonies with the familiar sounds of words; and even full-fledged percussion with the atonal sounds of smacking lips and clacking tongues. Unaccompanied by the textures and tones of other instruments, the sound of singing makes a song feel wholesome and friendly and round. It invites you to interpret the many sounds of singing and to imagine yourself joining in on any one of them.

Outside of a cappella, the sound of singing plays a more focused role. When there are instruments for rhythm and ambiance, the human voice takes center stage. Even when singing is incorporated as a background element, it adds depth and dynamics to the mix that no other instrument can accomplish. We may draw emotion and energy from strings, horns, and percussion, but it is often the sound of singing that puts meaning to a song and gives us a protagonist with whom we can relate.

With the release of its newest album, Schwing!, Jazzchor Freiburg gives us the opportunity to reflect on the different ways that the sound of singing fits into songs. In 2012, the group released an album entitled A Cappella, featuring jazz songs performed (you guessed it) a cappella. In that release, the sound of singing takes on all the roles of a classic big band, a tight knit combo, and even a new age music collective. In Schwing!, the group performs jazz songs accompanied by a drum kit, double-bass, and piano. The group, the director, and the genre is the same, but the sound of singing is drastically different.

Jazzchor Freiburg has earned a name for itself around the world and shared the stage with renowned jazz combos, classical orchestras, other vocal groups, and even the likes of Kirby Shaw and Bobby McFerrin. The choir ranges in size from about 25-40 singers, so whenever it performs you can expect a big, full sound thick with harmonies and powerful dynamics. Though the group is based in Germany and performs primarily in Europe and Asia, the repertoire is mostly American and the English is sung with impeccable enunciation. What glues this transnational musical group together is the affinity for jazz, the proficiency in vocal music, and the vision of director Bertrand Gröger. I had the pleasure of speaking to Gröger for an inside perspective on the choir and the music his group makes.

Bertrand Gröger founded Jazzchor Freiburg in 1990, and for the past 25 years has been leading the group across the eclectic expanse of musical territory that fits into the genre of jazz. When Gröger conceived Jazzchor Freiburg, he was specifically trying to provide singers with an alternative to the growing number of a cappella groups dominating the vocal music scene. He assembled repertoires that included some a cappella, but primarily sought and composed arrangements with instrumental accompaniment. As the choir evolved, the singers tended toward the a cappella arrangements and by 2009, Gröger was directing an almost exclusively a cappella jazz choir. It was during this era that the group recorded A Cappella and showed what it could do with just the sound of singing alone. 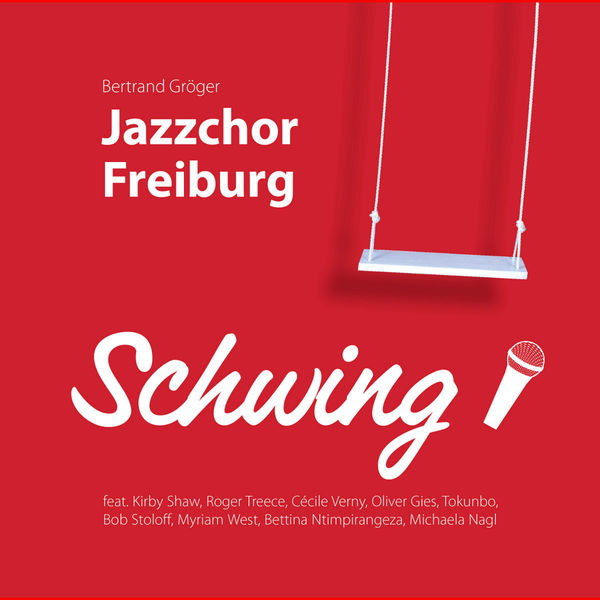 After the release of A Cappella in 2012, Gröger decided to steer Jazzchor Freiburg away from a cappella and back towards singing with accompaniment. Just three years later, the group released another album. At its core, Schwing! is very similar to A Cappella. There is still the powerful sound of a full choir and the precise togetherness of professional direction and rehearsal. There is still a diverse sampling of jazz ranging from uptempo big band swing to bluesy soulful ballads. The arrangements are still structured around a methodical choral head with a more improvisational bridge. There are still lots and lots of scat riffs. Despite all the similarities between these two albums, the sound of singing is profoundly transformed. Behind that transformation is the addition of just three simple instruments.

Let's start with the delicate art of jazz percussion. Daniel Schay and Matthias Meusel lay down most of the tracks on Schwing!, with Klaus Frech chipping in on Joy. Though there is not a noticeable difference from drummer to drummer, the difference from song to song is tremendous.

With just a standard kit, the percussionists are able to add so much variation in character to the sound of singing. The high hat tapping out the groove to Saturday Night Fish Fry and So What, traded for the snappy rim shots on From Day to Day and Here We Are. Those brush strokes create such suspense in Soulville and then such drama to Joy and She's Leaving Home. The additional pitched percussion and shakers in Kairo are perfect for transporting you to the exotic shores of the Nile. These subtle textures, and the way they are so neatly placed and layered, are essential to creating the particular aura of each piece on Schwing!.

While the space and pacing of each song is defined by the percussionists, the decorations come from Andreas Erchinger on the piano. With the vocals providing the main melody and a fair amount of ambiance, most of the arrangements on Schwing! would hold up without the piano. But then they wouldn't be nearly as jazzy.

Erchinger provides an element of playfulness and spontaneity that is otherwise lacking from the thunderous unison of the choir. His bright interjections hit upbeats and downbeats, lead into some measures and cross others, and play off other parts by doubling hits and filling spaces. You never know when you are going to hear a bluesy chord or a nimble riff coming off the keys! Though Erchinger plays a more important narrative role in Joy and She's Leaving Home, he really only takes center stage during a solo in Soulville. In Here We Are, Jens Gebel stands in for the piano on the more mellow-toned Rhodes to make room for the sprightly saxophone stylings of Morten Klein. The lightness of the keyboard instruments enables them to rhythmic and harmonic complexity without crowding out the vocals.

With all the excitement of the vocals and percussion and piano, it is all too easy to take the double-bass for granted. The double-bass hangs out an octave lower than most singers and tends to play sort of repetitive droning parts. Though you may not actively focus on what Christian Flohr and Jean Hommel (and Klaus Frech on Joy) are playing, it is their bass lines that give each song a feel. The classic walking bass makes Stella by Starlight and I've Got the World on a String feel like old-timey swing. The single measure progression establishes the groove in Kairo; short, syncopated rhythms bring the funk in Here We Are; prolonged root notes are the simple foundations of pop chords in From Day to Day; and sparse plunking reflects the melancholy of She's Leaving Home. The double bass sacrifices attention-grabbing timbre to provide a consistent bed of rhythm and pitch, and free the sound of singing to shape the song. 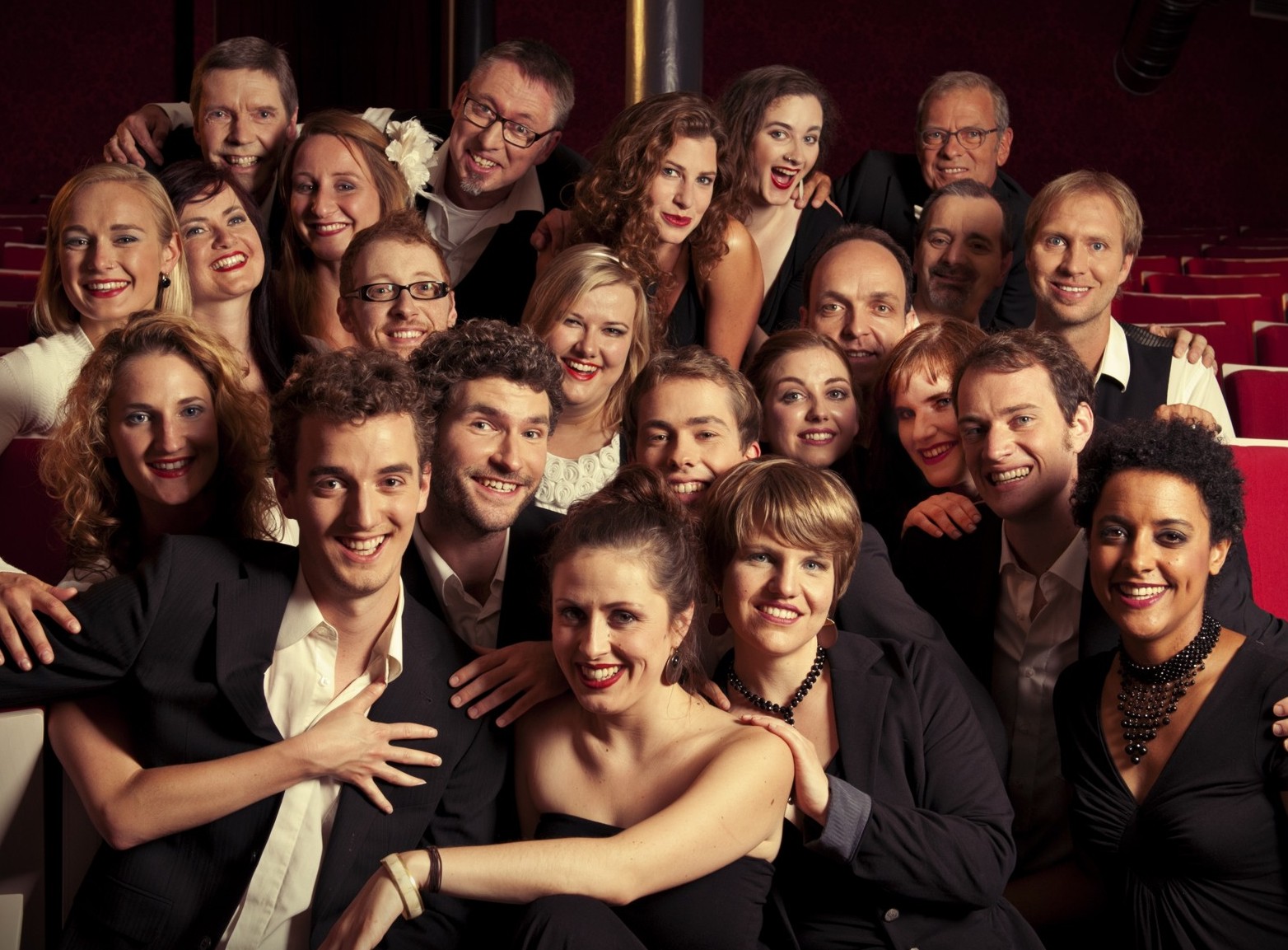 So, what does the singing sound like on Schwing!? Unlike A Cappella, it does not have a vocal percussionist to sound like a drum kit. The singers do not need to be constantly singing when they have a piano to help fill out space. They also don't have to designate any bass singers to plodding along the chord changes (though they still do for extra thickness in Soulville and Straighten Up and Fly Right). Instead, the sound of singing plays three major roles that can only be achieved with voices.

The first role is that of the soloist. The soloists present lyrics in a way that make us feel like they are sharing their own story and their own feelings. They sing with a flair that comes from not needing to blend, and they take scat solos that sound as authentic as though they were made up on the fly. Most songs on Schwing! feature a soloist, and all of them have the confident delivery of seasoned performers.

The second way we hear singing is also lyrical, but with the harmonization and volume of the full choir. Listening to the choir is less intimate than listening to a soloist. Still, the choir conveys enthusiasm and a warm sense of camaraderie. Whether the choir is singing the lyrics of the verse or chorus or flying through a scat solo as in So What, it is extremely impressive to hear so many people enunciating and changing pitch as one.

The third role of singing is the sheer dynamic potential the human voice has to offer. In Straighten Up and Fly Right it's emphatic horn-like hits. In Joy and Day to Day, it's huge gospel-esque crescendos and decrescendos on open vowels. This role can be filled by instruments, but it wouldn't pack the same punch as having the overtones and subconscious responsiveness that goes with the sound of singing. 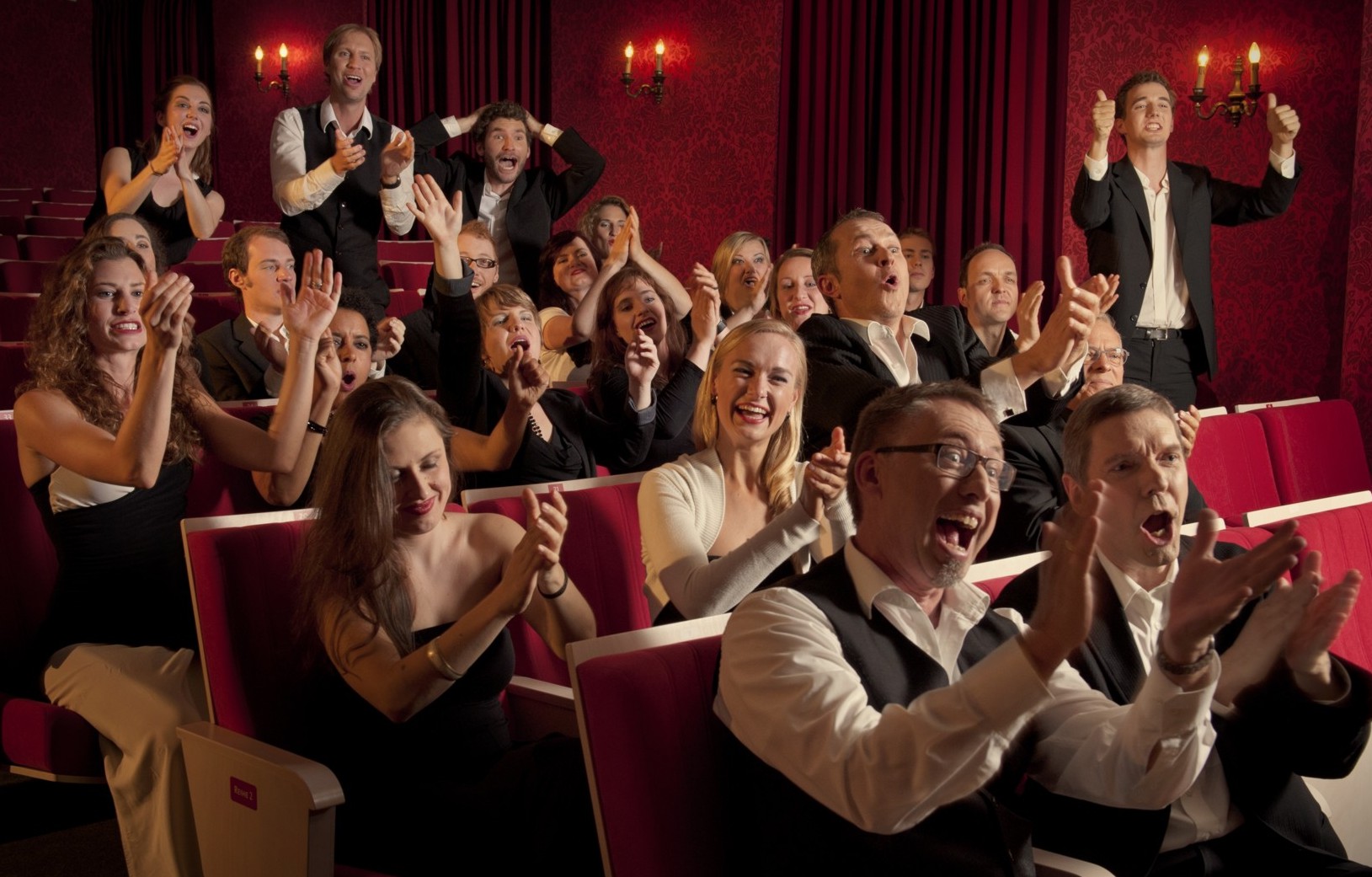 Jazzchor Freiburg reminds us that the sound of singing gives meaning, power, and personality to songs. To make the singing stand out and to achieve a specific artistic style, sometimes what you actually need to hear is less singing. While Jazzchor Freiburg’s A Cappella is a choral album with a jazz theme, Schwing! is truly a jazz album with a choir. Instruments have the ability to establish familiar soundscapes to create an aura, fill in silences, and add complexity without intruding on the vocal space in song. By adding accompaniment to cover the roles of the rhythm section, Gröger frees his choir to just be a choir and provide the richness of timbre and emotion that only the sound of singing can supply.