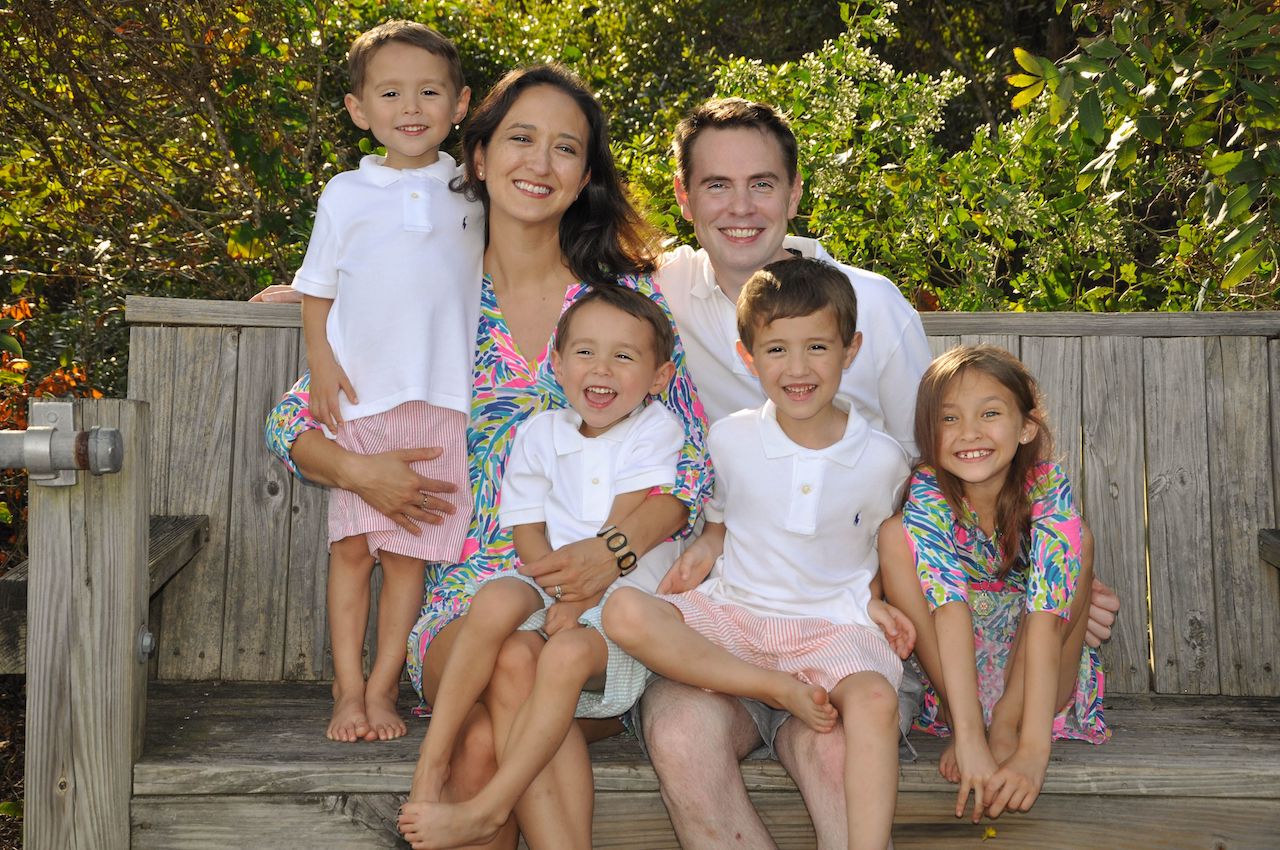 The author with her family.

"You’re one of the a cappella girls. I’m one of those a cappella boys, and we’re gonna have aca-children. It’s inevitable." Jesse, Pitch Perfect

"Yeah, that’s my life," says Deke Sharon, father of contemporary a cappella. "She sang in Duke Out of the Blue, I in the Tufts Beelzebubs. Without collegiate a cappella we would never have met."

In this day and age of swiping left, meet cutes seem to be a thing of the past. Not in the world of a cappella, where auditions, tours, shows, and festivals provide ample opportunity for the musically inclined to meet their matches.

Amanda Newman, executive director of Varsity Vocals, met her husband Rob while auditioning for No Strings Attached at the University of Illinois. "We were friends for awhile before finally getting together," she says, staying up all night talking on a drive from Illinois to the East Coast for their spring break tour. 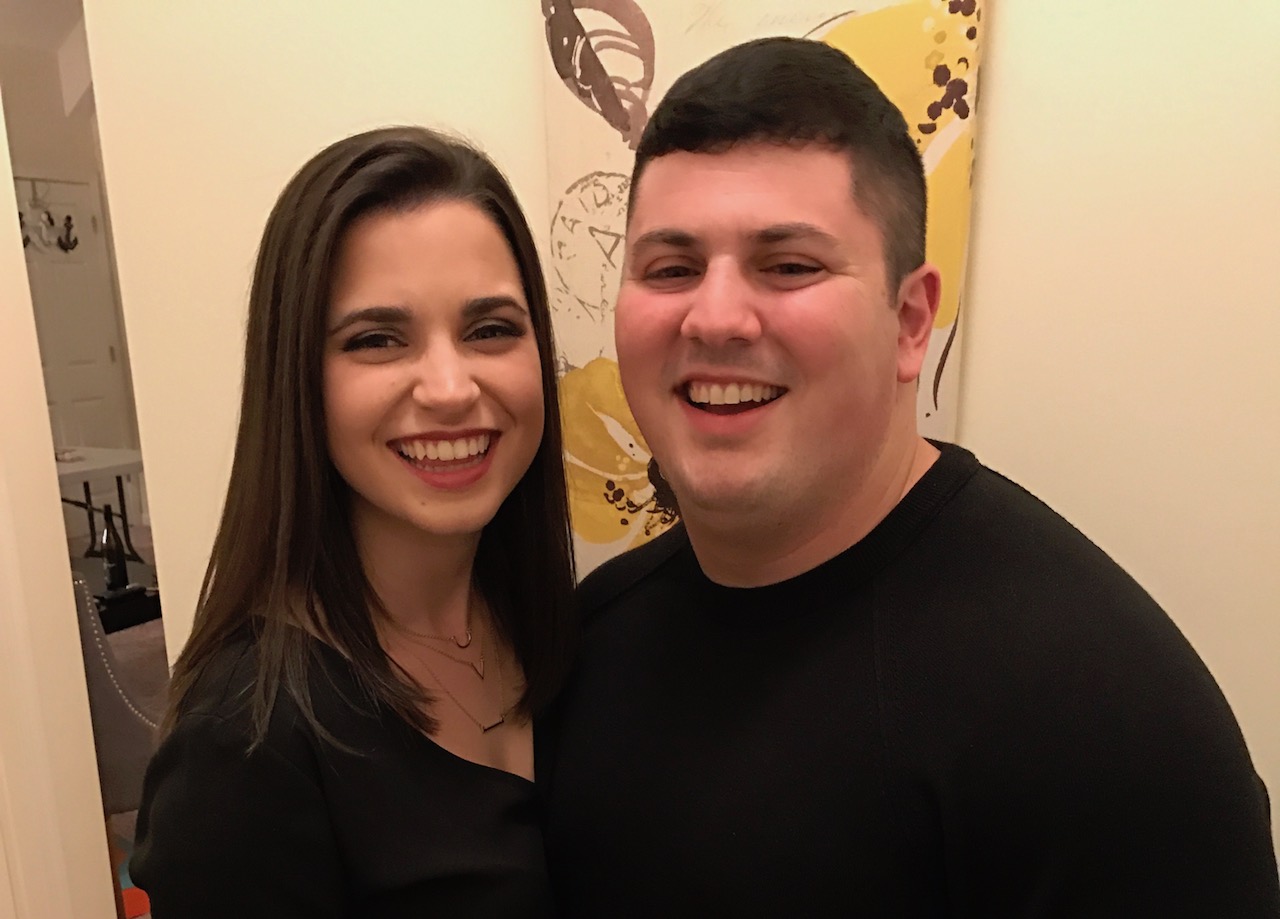 "A cappella is the reason I met Sam," says Brett Herskowitz. He and Samantha Hitchell met when she auditioned for Vocal Point at University of Delaware.

Scott Shattuck and Ryceejo Nordstrom Shattuck, the married couple known simply as Scott & Ryceejo, met in an auditioned choir at Brigham Young University in Utah. One of their early dates was spent at a studio recording a song. They immediately noticed how well their voices sounded together, but had to part because Ryceejo was leaving for a church mission for 18 months. The couple communicated via letters, and while she was away, Scott joined BYU Vocal Point. He sent Ryceejo a copy of their newest album. Of course, his solo was her favorite track.

J-M Erlendson and Elana Steingart own and operate Countermeasure Music, an a cappella production company and agency in Toronto, Canada. They met at the University of Toronto when they both joined The Varsity Jews (now defunct). Erlendson says, "We became fast friends through our love of weird harmony and desire to push for the best quality in performance." They later joined Onoscatopoeia, winning the ICCA quarterfinals together with that group. 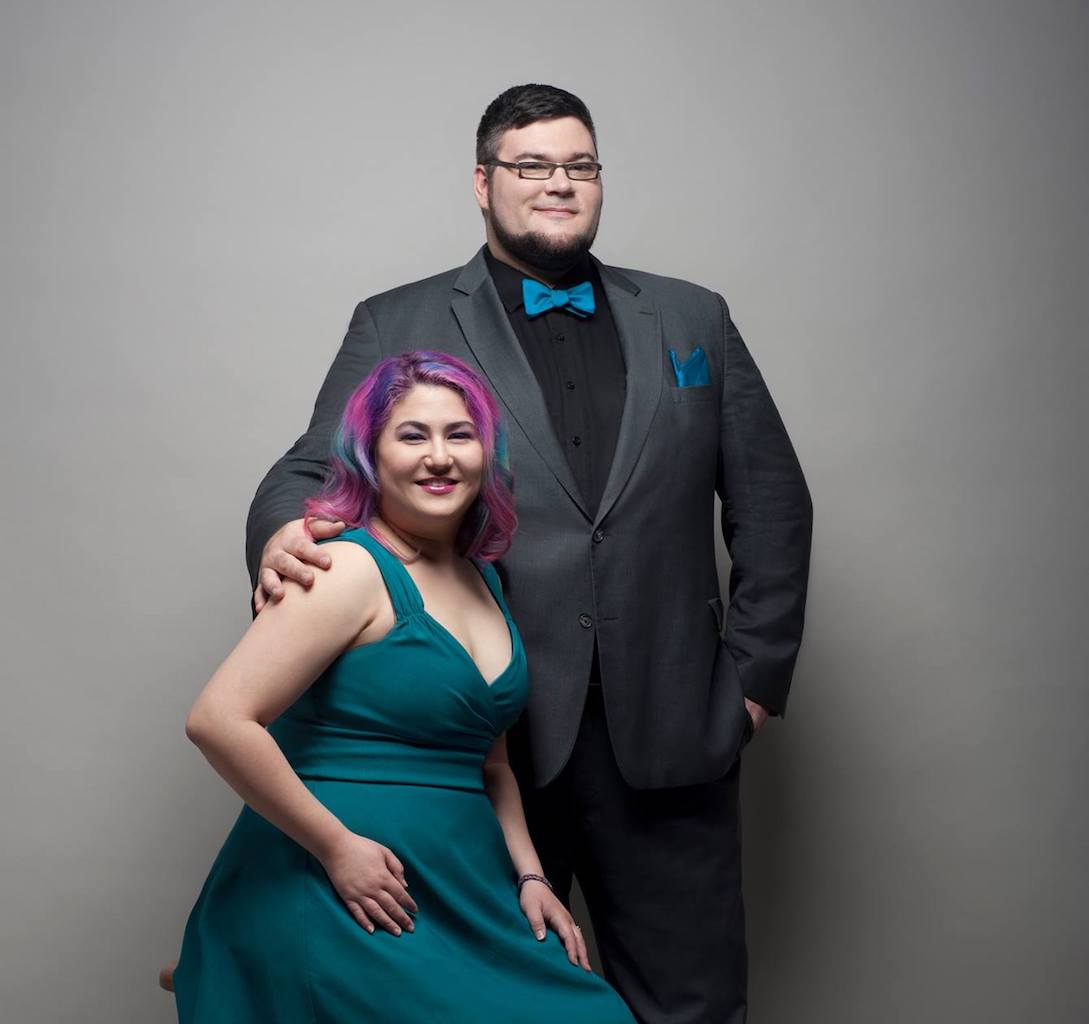 Strong relationships are built on shared passions, and a love of vocal music is a great starting point. "It was probably the easiest transition from best friends to a relationship ever recorded," says Samantha. She and Brett continue to sing together in a semi-professional group called Downbeat, which competed in Varsity Vocals’ first-ever A Cappella Open this year. For others, it took more effort. "I eventually wore down her resistance," says Deke. "She didn't want a boyfriend her senior year; [she wanted to] just finish her studies in peace ... Oops!" Deke and his wife Katy have been married since 1994 and have two aca-children. Cap, 17, started an a cappella group in high school, and Mimi, 14, attends Camp A Cappella.

For those who missed the collegiate a cappella love boat, never fear. There is always graduate school and beyond. I was a founding member of the USC Sirens, and though we had truckloads of a cappella boys visit us (and us visit them), I never met the one. Then I went to the University of Chicago Law School, where I met my husband Joel, an alum of the Sympathetic Vibrations. I was directing the (now defunct) a cappella group the Scales of Justice at the time, and Joel auditioned just so he could get closer to me.

Nicole Martinez had been a member of the semi-professional group Treble NYC for three years when Lily Szajnberg joined the group. They became close friends during a group trip to Memphis in 2010 to perform with Deltacappella. Things took off from there, culminating in an a cappella proposal.

RARB contributor Jonathan Minkoff met his wife Judy at the SingStrong International A Cappella Festival, where he serves as founder and president. He says meeting her "was a wow moment. A love at first sight moment. A stop-everything-slow-motion-jaw-drop-change-your-life-moment." Jonathan believes they were destined to be together – after all, her a cappella group was named Kismet.

Backed by his a cappella group, Blue Jupiter, Jonathan proposed to Judy with an original song on the stage of SingStrong in 2013, then followed it up in 2016 with the presentation of their aca-baby Apollo, Simba-style, during a performance of Circle of Life.

A cappella lovebirds often incorporate a cappella into their weddings, too. "Lots of [a cappella], in fact!" says Peter. "There was some during the ceremony, some during the reception, both groups." Brett and Sam say, "our wedding has yet to occur, but [we] can promise you that there’ll be a cappella there. Whether it’s a coordinated thing or just drunken spontaneity, there’ll be some singing going on." According to Nicole and Lily, "It’s not a proper a cappella wedding without a cappella." Treble sang them up and down the aisle! J-M and Elana had Countermeasure sing at key points throughout the ceremony. J-M’s favorite was when they sang "the original song Fox in the Field while Elana walked around me in traditional fashion." Scott and Ryceejo went one step further and gave out EPs with four tracks of them singing as wedding favors. Two of the songs were ones they arranged together while dating.

For some, participation in a cappella ends when college is over; for others, a cappella remains a key part of their lives. Deke consults on the Pitch Perfect movies, The Sing-Off, and more. Peter is now a prominent a cappella producer best known for his YouTube a cappella covers. 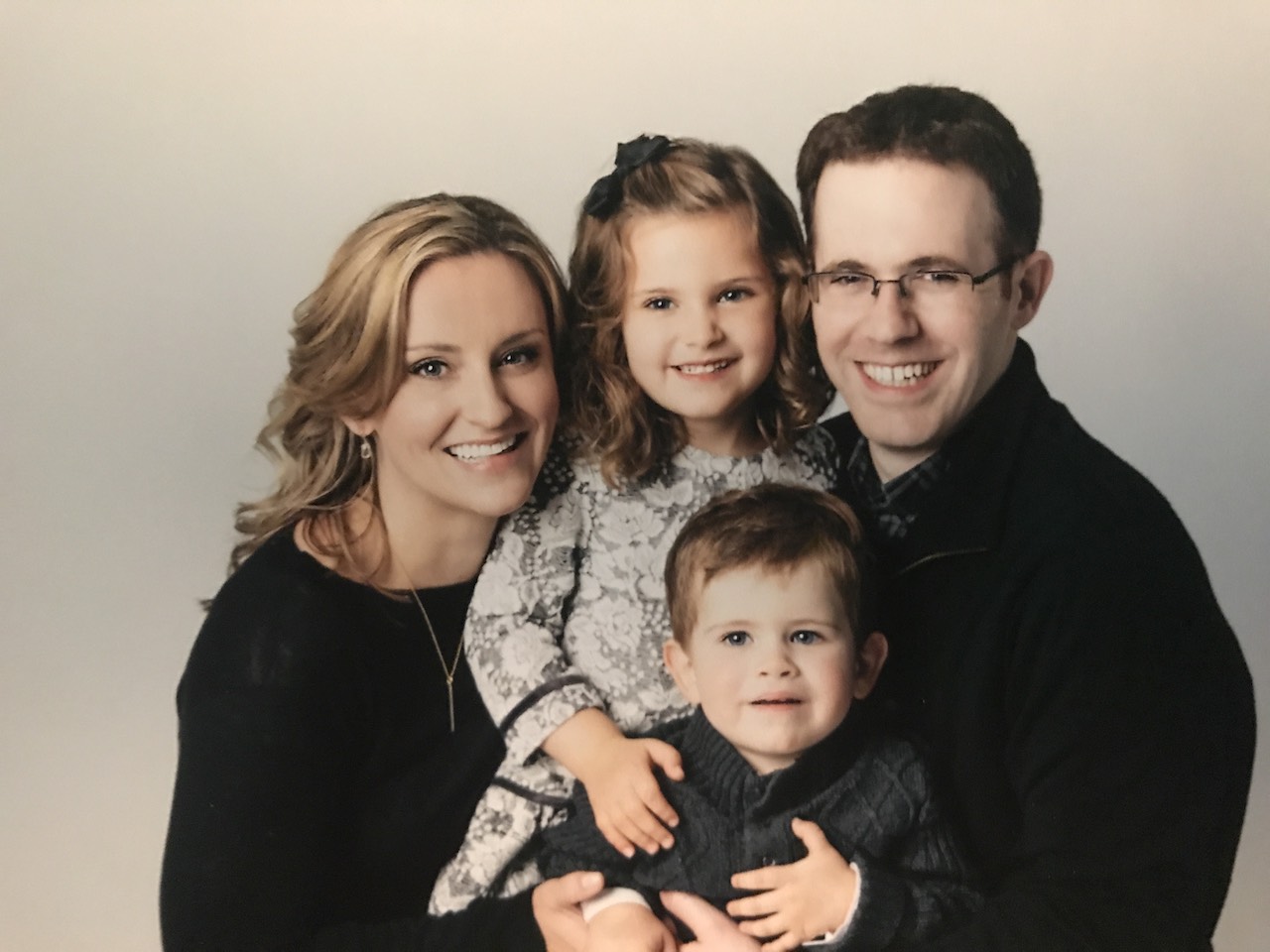 Amanda Newman with her family.

Amanda's husband Rob was instrumental (no pun intended) in her Varsity Vocals journey. "When Don Gooding posted that he was seeking to hire a new executive director to help rebuild the ICCA — which had crumbling infrastructure and was struggling economically to sustain itself — it was Rob who encouraged me to apply." Together, they made a business plan to make the ICCA a sustainable endeavor, achieving enormous success.

Amanda and Rob now have aca-children and "remain a great team with Varsity Vocals and now as parents to our kids, Emily and Ben. I can't imagine not having an a cappella project going with Rob — it's the only way we've ever known in our relationship of 18 years!"

As for me, Joel has always been supportive in my role as a reviewer and now Features writer for RARB, and every year he drives me across state lines so I can judge in an ICCA show. While we no longer sing a cappella together, we sing in our church choir, and every year put on a show with our four aca-children for the Pacesetters (55+) group at our church.

Scott and Ryceejo continue to record music together and share it on YouTube. They won Pentatonix's The First Noel cover competition and were featured on PTX’s channel. They also released La La Love, the love song-filled album that inspired this article. They recently also had their first aca-baby.

And while Lily still sings with Treble, Nicole has retired from the group. Together, they sing to their newborn aca-baby son, Charles Benson, as well as their rescue pup, Bosco. 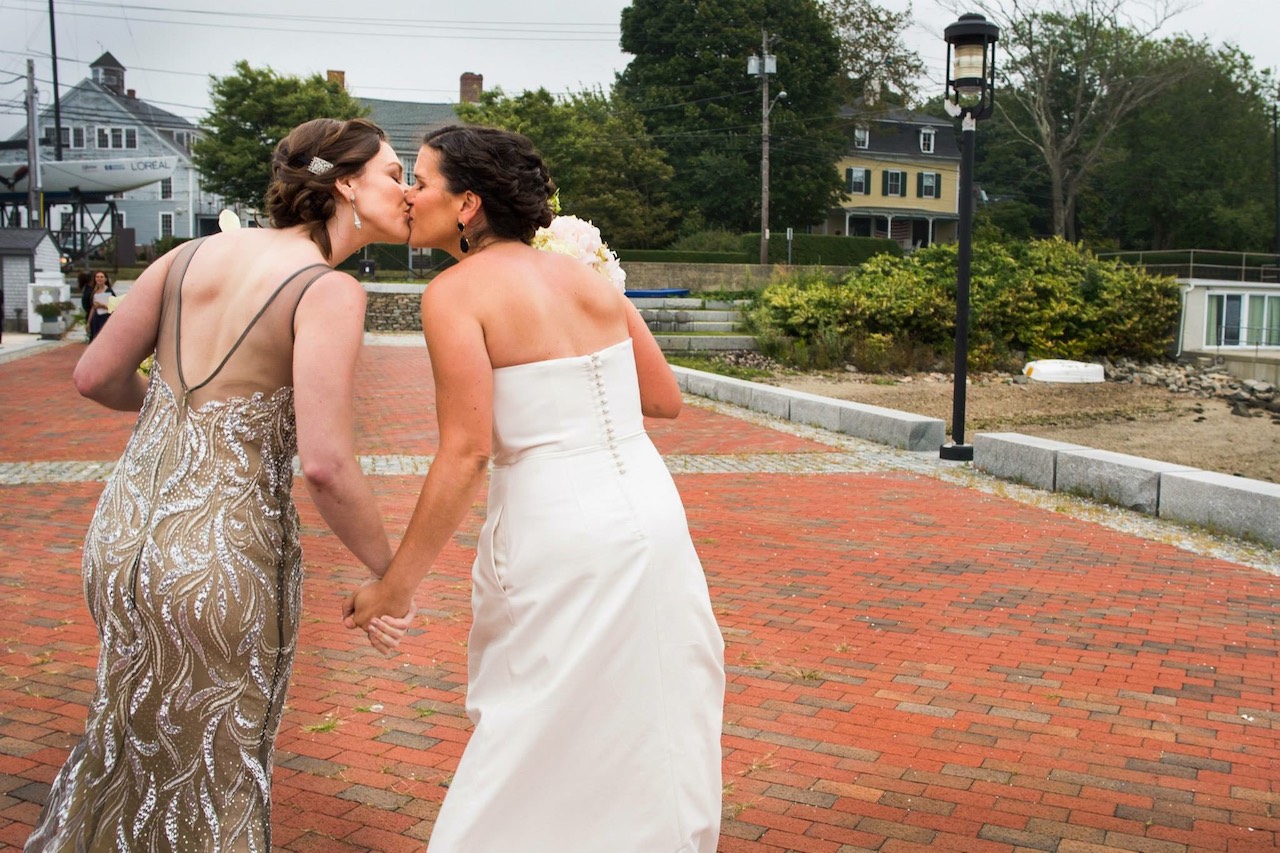 Lily Szajnberg (left) and Nicole Martinez at their wedding in 2014.

Did you find love through a cappella? Email Guang and perhaps there will be a follow-up article sharing more a cappella love stories.