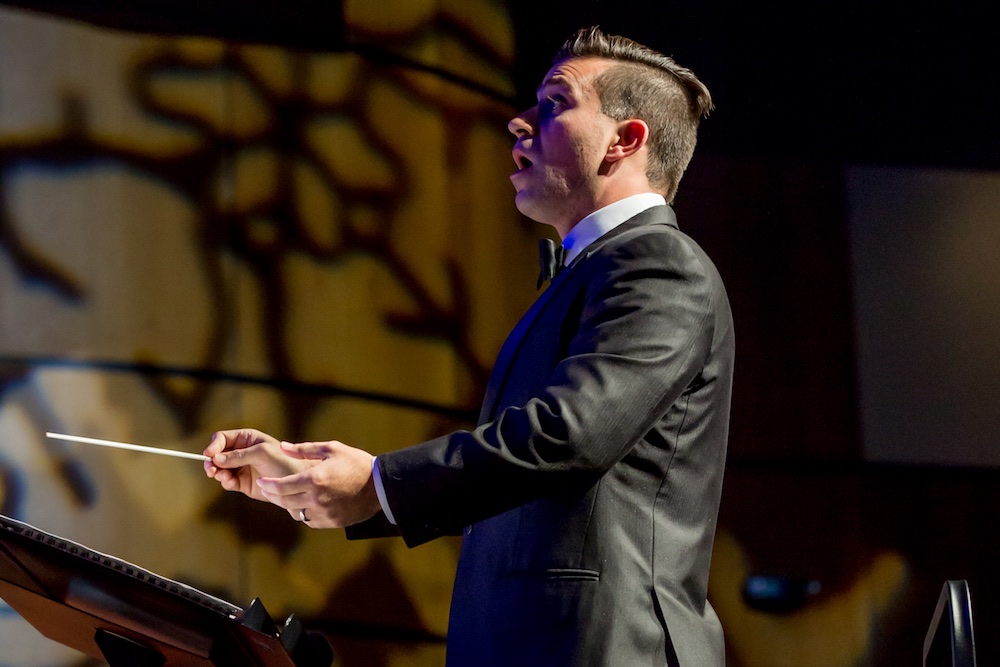 For decades, scholastic a cappella was focused at the collegiate level. However, the last several years have seen significant growth in contemporary a cappella at the K-12 level, with many new high school groups coming into existence, along with some advances at the middle school and even elementary school level. This growth has made an impact on both the quantity and quality of a cappella music at all levels of life, professional and recreational.

One of the primary leaders in this movement in recent years has been J.D. Frizzell. As Director of Fine Arts and Director of Vocal Music at Briarcrest Christian Academy, his academic teaching career has been award-winning and highly watched as an example of "what to do". OneVoice, Briarcrest's contemporary a cappella ensemble, has been one of the leading groups at the high school level. The group has won the Macy's A Cappella Challenge, competed on NBC's America's Got Talent, and released cutting-edge recordings as part of Sony's recording family. Mr. Frizzell is also Co-Founder and President of the A Cappella Education Association, a 501(c)(3) non-profit dedicated to the growth of both a cappella in general and as part of the educational experience in specific.

His most recent work is as the manager of June, a new group of former OneVoice members which has recently released its first video. J.D. graciously agreed to spend some time discussing this new venture, as well as his philosophies on a cappella education.

What is June, how are you involved, and what will be making this group distinctive in the professional a cappella scene once they get rolling?

J.D. Frizzell: June is an idea that some of my former students and I had. Many of them were already in college studying music with the ultimate goal of performing for a living. As we all know, a degree does not guarantee a successful performing career, and these alumni indicated that they missed the excellence pursued on a daily basis in OneVoice. Thus, June was born.

My role could best be described as a manager. I coordinate their music, production, marketing, and concerts. It's basically what I do for OneVoice, but with far more involvement from the group members in regards to musical and branding decisions.

The group is arranging almost all of their music themselves, which has resulted in a unique sound. Robert Dietz actually flew in from L.A. for a few days to work with them on crafting their style and aesthetic. I hope that those who have been (within) the a cappella circle for a while will hear some familiar influences while recognizing a fresh approach.

In reading some of the Facebook "teaser posts" involving the members, they seem to be part of a growing trend where groups form that aren't necessarily "local" to one another. How difficult is it to coordinate schedules to allow growth and interactive creativity, especially when their school commitments kick in within the next month or so?

JDF: The group can all get to Memphis or anywhere else on a given weekend for a concert or rehearsals. The model for now will be to learn a lot of music individually, then come together on a regular basis to rehearse it. The group all records themselves, as well, so we can continue to produce content while apart.

You said that the group "missed the excellence" of their experience with OneVoice. I understand that those that educate are as diverse and unique as those that they educate. That said, how would a music educator pulling together any group, let alone one performing in the contemporary a cappella style, start to lay the groundwork for that excellence? I feel that this relevant to even those not teaching for a living as any group requires this kind of thought process and groundwork to succeed. What are some starting points anyone teaching a group of singers can do from day one to set the table for progress and eventual success?

Those are definitely hallmarks of a great program, but an accredited teacher or professor leading a school ensemble (whether it's for credit or not) will usually have a larger "toolkit" with which to build those blocks with, as well as a clear teacher to student paradigm that leaves no doubt as to who makes the final decisions.

These things are less clear at the collegiate level — despite the growth of groups pre-college, many singers still have their first experience singing a cappella when they go to college, and the majority will not have significant teaching or leadership experience before they have been named their groups Musical Director.

What are some suggestions or even resources you can recommend to help a new director be able to work on those three concepts with their group as soon as possible?

JDF: Vision is possible through things like group retreats, where the members of the group talk about their strengths and weaknesses. From there, the group can set some goals for the year — what kind of performances they want to do, things they wish to achieve artistically (recording? competing?), etc. Then the group can choose music and arrangements that fit the strengths, weaknesses, and creative goals.

Know how your group is going to:

Unwavering consistency: everyone in the group has to be committed to the vision and the processes. There is no room for even one person who doesn't meet the same level of consistency as the rest.

Need help with any of these things? I suggest attending one of the many AEA, CASA, or SingStrong festivals around the country, a camp (such as) Camp A Cappella, or a seminar like Next Level Direct.

Let's discuss June's first video: Fast Car originally performed by Tracy Chapman. The trend currently seems to be groups focusing on either newly released pop hits or music focused on another cultural phenomenon, such as "Game of Thrones" or video game music. In that landscape, I found June's presentation to be a refreshing change. Why that song?

JDF: It's understandable why groups are using popular cultural references and other gimmicks — the landscape is crowded and it is taking increasingly more to capture people’s attention on a broad scale.

The impetus for June as a group was to create new vocal art, so those types of gimmicks don't match our vision. I've always loved the song Fast Car and thought that Tracy Chapman was one of the more underrated singer/songwriters of the '80s and '90s. While I think that many popular artists today are doing interesting things, storytelling is not one of them. The story that Tracy tells in (the song) is tragic and moving. It spoke to me on a very deep and personal level. I had not arranged something for a vocal group in quite some time, so the opportunity to set this for June was a real treat.

So if the focus is vocal art over trend, will June be regularly eschewing the contemporary pop rock medium and providing work in other areas, such as jazz, World music, or even classical?

JDF: I can't ruin the surprise announcement (that June has scheduled for release) on August 31, but I'll say that each year you'll hear something new and different from them!

JDF: OneVoice will be recording a new album again, and we're excited about the concept we've developed for that. We're focusing on live concerts and outreach as well, with performances at Eastern Division ACDA, MS ACDA, The U. Of Alabama Honor Choir, The National Youth Workers Conference, Creative Aging, and more.

You have a number of irons in the fire that we've discussed, plus many we haven't such as the A Cappella Education Association. You've also become a father within the last calendar year, which is your most important work to date, I would imagine. How do you maintain the balance to be everything your career and personal life demands while still managing the self-care that you need?

JDF: I've actually learned to say "no" to things from time to time! That has certainly helped.

My daily schedule is very structured — I get to work early, use my free time very productively, teach my classes, and almost always go to CrossFit in the afternoon when I'm otherwise mentally spent. At that point, I get to be Dad and husband — without a doubt my favorite part of the day! I can't remember the last time I haven't had a working lunch or watched more than 30 minutes of uninterrupted television.

Well, I'm glad you didn't say "no" to this interview. Let’s close this out with one more question. No doubt that contemporary a cappella has found new popularity in recent years from a mainstream standpoint that seems to have opened the door for it to be effectively used more widely as part of a choral curriculum, be it K-12 or post-secondary. What "battles" remain in both the public eye and in how your education peers see the medium to get past whatever hang-ups music educators may have in seeing the value of exposing students to contemporary a cappella?

JDF: Educators are typically afraid of what they don't understand. For a cappella, this tends to be:

I encourage everyone to join the A Cappella Education Association to connect with and learn from directors all over the country.

June’s next major announcement is due August 31, 2017 – you can be among the first to see it by liking their Facebook Page. You can follow J.D. Frizzell’s activities through his Facebook Page or his website.