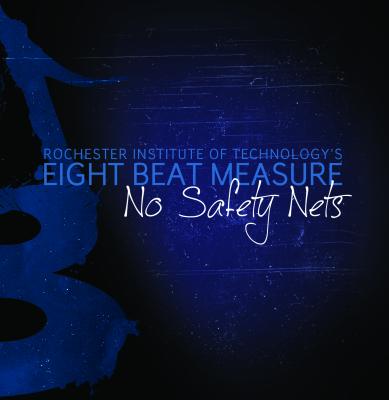 The title No Safety Nets takes on a bit of irony after you listen to this album from Rochester Institute of Technology's Eight Beat Measure, as you realize that despite their insistence, the best of what you've just heard is provided by two giant safety nets (in talent, not in girth): namely, Ed Boyer (editing and mixing) and Dave Sperandio (mastering).

OK, that's not entirely fair. Bradley Turnbull did have to arrange (in whole or in part) nearly every one of the album's nine tracks. Based on the finished product, he seems to have done a reasonably capable job with most of the material, despite an overemphasis on plodding rhythmic motifs that repeat ad nauseum or soaring power chords on "ooh" and "ahh". Trouble is, virtually every interesting aspect of each arrangement is actually courtesy of post-production, be it sampled vp or distortion or placement in the mix or any number of other techniques. These are not fundamentally interesting or complex arrangements that are only enhanced by the polish provided by a couple of studio wizards. More often than not, these are painfully basic and oftentimes boring arrangements that are made to sound so much better than they otherwise might thanks to the aforementioned wizardry.

All right, all right, so the guys of Eight Beat Measure still had to sing the arrangements. And that they do quite ably. There are no standout soloists to mention, but there is generally a solid energy, especially in the uptempo tracks, and I think it's fair to say the group is having a good time and enjoying themselves. That definitely counts for something.

Speaking of counting for something, it's nice to see that when a song comes from a movie soundtrack, it suddenly has a composer and/or lyricist. Somehow the pop/rock/heavy metal covers featured here sprang to life fully formed by the artists who recorded them and didn't require similar services. Hmmm ... (Yes, yes, I can hear you clucking that "every group does this and you don't say anything". But it's painfully obvious here, when two of the nine tracks are credited to "Composers" and the other tracks feature the info regarding the "Original Artist". And either way, whether I mention it or not, it's still wrong.)

In the end, No Safety Nets may indeed be a valid claim precisely because the guys of Eight Beat Measure aren't flying on a terribly high trapeze or walking on a very narrow tightrope. Either way, there are just so few risks taken here that there's hardly any danger at all. Hopefully they can build on the OK-ness of this effort and take a few bigger chances next time.

When I finished listening to No Safety Nets for the first time, I immediately recalled a conversation from the Producers' Panel at SoJam 2010. Names are unimportant (and frankly, I don't remember who said what), but an audience member asked, paraphrased: "We seem to have reached a plateau of how well an album can be produced. What's the next step?" The answer: "Sing better."

Eight Beat Measure's latest and first full-length release shows promise for the future, but their execution here is unfortunately average. Two Coldplay songs and two Muse songs appear on a nine-track album, and the rest of the track list is either overdone or uninteresting.

The immediate front end of the album seems to be the biggest problem. Eight Beat Measure's decision to self-track before sending the album off to be edited and mixed was admirable, but it led to most of the album sounding forgettable and a few tracks sounding particularly boring. Songs like Haven't Met You Yet and Viva la Vida are almost exclusively homophonically arranged and offer little tonal, textural, or dynamic variation.

Other songs lack stylistic impact and cohesion. Hard Rock Hallelujah was trite when originally performed by fantasy metal band Lordi, only listenable because they sang it while wearing Gwar-esque vinyl monster costumes. The first fifteen seconds of church organ were the best part of the song, and the rest I could have lived without. Supermassive Reckoner (the second appearance by Muse, interpolated with a Radiohead song) was also underdeveloped. To the unacquainted ear, it sounds like a cover of Supermassive Black Hole with "reckoner" used as a syllable and a minute-and-a-half long instrumental at the end.

As I listened through No Safety Nets a second and third time, I couldn't figure out exactly why the album didn't feel unified or cohesive. Then it hit me: no one produced this album. The liner notes don't have a person listed who guided the album from start to finish in vision and aesthetic. Oversight of the group's next album by a single producer or a small creative team will help take disparate parts and songs and bring them together while simultaneously trimming the fat. This will make the next album more sleek and more like something you'd want to listen to again and again. This one, however, I'd pass on.

Eight Beat Measure presents us with a certainly not-awful album in their most recent release, No Safety Nets. It's more or less an average album. The moments that are better consist of excellent arrangements and beautiful musicality. The moments that are not so much include juvenile song choice and a too-heavy hand from the production end of things.

Overdone tracks like Viva la Vida have no place on any recent album released. They are tired and done, and someone else has done it better. And joke tracks such as Doug Theme Song should certainly not be the closing track of an album that expects to be taken seriously in any way. As a hidden track, maybe. I'm sure in a concert, it goes over well with the age group that is in the audience, but I can't help but question the seriousness of No Safety Nets when the last thing I hear on it is an old Nickelodeon show theme song.

There are also a handful of tracks that have either way too much production or not enough. Production effects on Lost+ and Assassin are adequately used in the beginning of each track, but by the end completely take over to the point of irritating distortion. Hard Rock Hallelujah has the potential to be a pretty stellar rock cover, but for the first time on the album, the production falls back — too far, if I may say. The soloist sets the tone for a truly hard rock song, but is backed by a sea of "jah"s and "jin"s laced with no effects until the very end of the song, and I found it to be too little too late.

On the other side of the spectrum, Supermassive Reckoner has the perfect balance of voice and effects to serve Eight Beat Measure's take on the track. While I am not one hundred percent satisfied with the soloist, and this track is certainly not perfect, it is an excellent example of how applying mixing effects can be very successful.

Then there is Honor Him/Now We Are Free, which really shows off the musicality of this group. Beautiful choral singing paired with a brilliant arrangement easily earns this track a "5". This track is needed on No Safety Nets to remind the listener that these guys can rock, and that's not the only thing they have up their sleeves.

With a couple of high notes and a few low notes, Eight Beat Measure has released an average album with No Safety Nets that is easily on par with their collegiate male group counterparts. On future recording endeavors, I would encourage these guys to have a clear vision for their albums, be it serious and professional or silly and for fun, and to know what they want from their producers and how to communicate that.

Visit our website or find us on iTunes here.