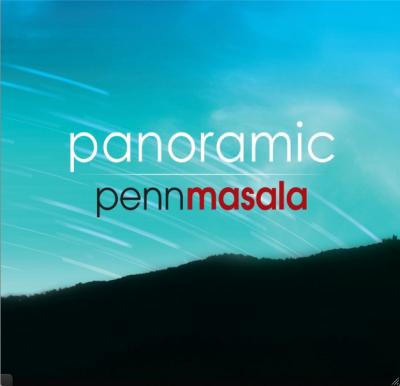 My review of Penn Masala's On Detours took the group to task for going back to the same gimmick over and over again with diminishing returns. With few exceptions, Panoramic is not terribly different. It features more of the same quasi-mashups of English pop/rock material with Hindi-Urdu pop music and/or music from Indian motion pictures, most of which just leave me depressed about the state of music and lyric-writing on two continents instead of just one.

For a time, the concept was unique. No longer, as groups like Dhamakapella at Case Western Reserve are using the same gimmick as they try to create a version of South Asian fusion a cappella.

For a time, the concept was novel and intriguing. But with six quite similar albums now to its credit, Penn Masala by itself has rendered it hackneyed and played out.

What could be done to breathe some fresh life into all of this?

Big picture: two songs that sound nearly identical are cute for about thirty seconds, and boring for the next three to four minutes. If there's musically thematic connective tissue between the songs, by all means, show me how you got from point A to point B. But they need to be two different places, each interesting and engaging in its own right. When Masala succeeds — in the closing Down / Desi Girl for example — the group offers a solid version of the English song, uses some common chords to segue into the Hindi song, and then lets that song become its own event. Slowly, that morphs back into the English song and then back into Hindi and the whole thing feels "of a piece" even as the two songs remain distinct. Far too often though, we get pairings of two songs like Viva La Vida / Jashn-e-Bahara or Heartless / Kabhi Kabhi that are arranged and/or performed so similarly that there is nothing particularly enjoyable about listening to either of them. Or sometimes, we get classics like Here Comes the Sun that are entirely robbed of their distinctive feel and flavor in the service of shoehorning them into yet another medley.

Even more specifically, I plead with Masala's arrangers to please lose the "drone". By that I mean that not every single arrangement needs a chordal "ooh" or "ahh" behind every single second of every single track. Yet it's there in at least 95% of the songs and consistently undermines one arrangement's ability to sound different from the next. Heck, there are three primary arrangers credited on Panoramic, but you'd be hard-pressed to pick out any individual style or technique as everything pretty much sounds the same. Perhaps that's one point for consistency but it's a far larger point deduction for monotony.

I'd be remiss if I didn't mention the songs that are entirely in Hindi, including two originals. Perhaps because these are not weighted down by the need to try and fuse seamlessly with another song, they fare a bit better than the mashups.

Indeed, I almost wish Masala might abandon the gimmick it's relied upon for so long and simply put all of its energies into an all-Hindi album that channels all the group's creativity into a cappella versions of those songs, which were the best they could be. Quite simply, we don't need another half-assed version of She Will Be Loved or Viva la Vida, even if these songs do have musical cousins to the East. But we could very much enjoy more music like Chaiyya Chaiyya even without any linkage to the West.

If you haven't heard the way Penn Masala fuses Western and South Asian songs, it's definitely clever and worth your attention; sort of like a zipper locking together two different fabrics all tight and snug. But if you have heard this group before, I imagine this novelty won't impress you much anymore. However, Penn Masala has its niche, and it's successful, so I suppose we'll hear more zipper albums in the future. And yet, while Panoramic is pleasant in its own way, if we put the fusion aspect aside there isn't enough musical intensity and range to really leave a permanent mark.

The first two tracks are enough to highlight the lack of intensity. Each time the group opens to a big open vowel like "ahhh", it's just so tame and mild and listless (for reference, listen to what happens in the chorus of Here Comes the Sun). When an arranger has the block snap open to such a vowel, it's supposed to be a big moment. I'm struggling to hear any truly big moments on Panoramic. Where is the vocal spin and drive? Even accented notes don't seem very accented or snappy enough (assess the famous bass line of Viva la Vida).

Another factor leaving Panoramic bubbling in a slow cooker instead of sizzling hot off the grill is all the sameness here. There are so many mid-tempo tracks sung at medium volume. The soloists also sound largely the same — warm, skilled, and with similar timbres too — but not electric, not crazy-awesome, not keen on taking risks. Plus, not enough dynamics or phrasing from the group, and not nearly enough contrast between tracks. We're not pulled enough into ballads because of delicacy and growth and vulnerability. We're not compelled enough to dance during the dance tracks because of fire and spit and raw energy. Everything is sung acceptably, everything sounds nice, but nothing is incredibly performed. When we finally get variance — the lively original Is Pal Mein and the infectious (and well-accented!) Chaiyya Chaiyya — it's like a bullet of energy and bliss.

If the singers in Penn Masala continue down their familiar path, I'm sure they'll continue to do well for themselves; but they'll really shine against other a cappella groups if they can focus in on musicality and impact.

Panoramic is a nice-sounding, inoffensive album with the signature Penn Masala style. There's nothing glaringly wrong with the album, but it never achieves any moments of brilliance. In fact, many of the tracks struggle to rise above the "pleasant-but-average" hurdle.

Penn Masala's overall aesthetic is a fusion of Hindi and contemporary radio pop. While it's admirable that the group has created an identity for itself, Panoramic showcases the downside of such a specialized group sound. Instead of striving for powerful moments, emotional connections and innovative interpretations, Panoramic rests on the group's well-established conceit to provide listener interest. This particular blend of Hindi and English pop certainly marks the group as different from the wider a cappella scene, but different doesn't necessarily equal outstanding.

The album suffers from a lack of energy across the board, which is made more noticeable by the glut of mid-tempo, mellow song choices. Viva la Vida, Here Comes the Sun, She Will Be Loved, and Dreaming with a Broken Heart all on the same album make Panoramic just plod along, especially as the arrangements lack complexity. The Hindi songs paired with them aren't enough to save the tracks as a whole from mediocrity. Which isn't to say groups can't be both mellow and compelling; if Penn Masala had sung with more emotion and dynamic contrast, perhaps a few tracks would've sounded more intriguing.

There are some bright spots on the album, however. The group finally wakes up and sings with some energy and spirit on the last track, Down/Desi Girl. I could've done without the rap, and the snippet from All the Above is verging into overkill territory, but the exuberant and joyful vibe more than makes up for it. Where Penn Masala really shines is on the full-version Hindi tracks. The rich, textured sound of Bahara is a breath of fresh air on the album. The two original tracks are solid as well: Is Pal Mein is one of the few songs on the album that builds to a climax instead of just blandly repeating the final chorus, and the tender baritone solo on Kaash is warm and welcoming. It doesn't surprise me that these tracks are the standouts — when the group takes away its Hindi/pop fusion crutch, Penn Masala crafts some beautiful arrangements. More of this, please, and less of the lackluster mashups.

The biggest takeaway here is that combining two mediocre songs into one track (even if one song is in Hindi) isn't enough to create something interesting and powerful. The men in Penn Masala are clearly talented singers and arrangers, and I'm not suggesting that they abandon their signature style. But I do hope that next time, the group won't depend on it.

To purchase this album or previous releases, please visit the group's website, CD Baby, or the iTunes Store.