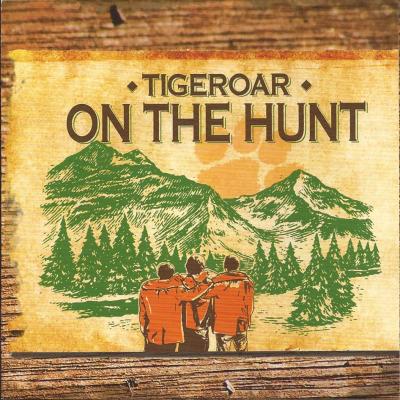 On The Hunt from Clemson's all-male group Tigeroar might just be the yacht rock of college a cappella: these guys have created (or covered) soft rock anthem after soft rock anthem, creating an album that's easy to listen to but ultimately doesn't have any memorable moments.

The problem with On The Hunt is as much song choice as it is arrangement style: Tigeroar makes literal covers of songs that settle into a groove and just stay there. Album-opener Ladies' Night sounds like a set-the-mood tune, and then the rest of the album follows suit. For the most part, the songs here are mellow ones: the originals for Somebody's Baby, Never Say Never, and Use Somebody are incredibly repetitive, and the guys haven't done much to jazz them up at all. Even The Zephyr Song is a telling choice: the Red Hot Chili Peppers have plenty of dynamic songs with incredible bass lines, but this one just doesn't go anywhere. It certainly fits with Tigeroar's aesthetic on the rest of On The Hunt, but it doesn't make for a very interesting listen.

These guys have good pitch and blend, and the album's production sounds good (thanks to Bill Hare, whose name is somewhat buried in the album's thank-you list). But in the a cappella world of 2012, that's just not enough any more. I kept trying to find the energy and it just wasn't there; often, the only thing really driving the song forward is the percussion. That shouldn't be the case with a song such as It's All Been Done, whose original has some really peppy energy. A literal cover of Taio Cruz's Break Your Heart is brought down by the Ludacris verse; it just sticks out against the rest of the album, plus the song is an awkward mash-up with Jason Derulo's In My Head.

My wish for Tigeroar is simple: do something. Push the dynamics, turn a song on its head, or (if the group is going to continue with literal transcriptions) find a song that has some interesting movement on its own. Musically, these singers can execute good arrangements; I'm just waiting for them to create a real "wow" moment, one that will make their music pop instead of fading into a soft-rock background.

A lot of contemporary a cappella albums, particularly albums coming out of college groups, have a tendency to be overstuffed and lacking in direction. Wrangling material from a live show and taking into account changes in group membership can make it very difficult to produce a compelling final product. I'm pleased to report that Tigeroar's latest effort, On The Hunt, functions very well as an album. The boys of Tigeroar value efficiency; excess fat is trimmed off arrangements to allow for the core of the song to shine through. From start to finish, the album seems professionally conceived and planned, and it's executed with skill and flourish.

Tigeroar is filled with talented musicians, from the aforementioned efficient arrangements (all done in-house) to the appropriately selected soloists, On The Hunt brims with musicality. The group's blend and sound is fantastic, equally spot-on when locking into shimmering chords or chugging along in a rhythm guitar part. Pitch correction is minimal; the lack of audio wizardry really lets the singers shine, building up the intensity and energy of the album.

It's a build that does not reach a satisfactory climax, however, and that's On The Hunt's biggest failing. The group's sound, though executed skillfully, tends to lack warmth and vitality. It doesn't sound lethargic, necessarily, but On The Hunt feels locked into chilly detachment. Drum and bass parts lack propulsion, and everything is neatly tracked to the point of sterility. Soloists also lack fire — Caleb Suggs sounds lovely on The Luckiest, but he never ventures out of safe territory.

On The Hunt, like most collegiate albums, is a cross-genre grab bag. Unlike most collegiate albums, though, it maintains a sense that all the songs on the album are being performed by the same group. The songs shown here tend towards being fun and light, a collection of college party music (with a Ben Folds ballad added in for when everything's winding down!) arranged artistically. The album leans heavily on its audience's memory over innovation, but when listening it's hard to see Tigeroar's intention as being anything but to produce a solid album tinged with nostalgia; to its credit, the group really does succeed.

Well, at least the producers had fun with On The Hunt. They went to town with the phasers, distortion, compression, and delay to make some truly bedazzling sound effects. Meanwhile, the arrangers labored over cramming songs with any rhythmic and harmonic texture remotely related to the original. And the singers sound like they had a boring time in the studio, perhaps missing the excitement of Tigeroar's renowned stage performances. The result: an album that is mostly exhausting, sometimes interesting, and generally not that fun for the listener.

Arrangement complexity is fun in moderation, but can turn into a jungly cacophony quickly. The verses of Use Somebody do not need "thum"s, "jum je de"s, "doo doo doo"s, "oh"s, percussion, AND a doubled lead. And did I mention the phasers, distortion, compression, and delay? That conglomeration of textures doesn't make Tigeroar sound more like a rock band, it makes the group sound like every member wrote his own part and left it for producer Bill Hare to mix together. I was much more satisfied with the barebones arranging in Ladies' Night and In My Head/Break Your Heart. By focusing the background in these pieces, Robert Jones and Greg Smith & Adam Thompson allow the listener to lock in with the groove and really appreciate the creativity and production that went into the album.

Unfortunately, On The Hunt spends more time being jungly than musical. Whatever It Is, Somebody's Baby, It's All Been Done, and The Zephyr Song should be straightforward feel-good songs. But it doesn't feel very good to be bombarded by Hammond organ, distorted guitar, and fuzzy octavized bass for a half hour. The compressor mashes all these sounds right up against your eardrums, so that there is no dynamic contrast from bridge to chorus, pop ballad to hip-hop anthem. In the thick of the jungle it gets difficult to focus on the soloist. Soloists are generally audible and decent singers, but as with the background none are particularly emotive, so it winds up being just as easy to let yourself get entangled in the more digitally enhanced brush.

After plodding through this album, I wondered how recent Tigeroar recordings had earned such high marks. I skimmed through Cherry Road (2009) and The Ruckus (2007), and was pleasantly surprised with what I heard. In both albums there were innovative arrangements, prominent soloists, and most importantly: humans! For me, the heart of a cappella comes from hearing genuine human voices blending and having fun in the studio. On The Hunt only offers a snippet of humanity in The Luckiest, and a touch of gusto in All of the Lights. Otherwise the boys were rather reserved and relied on production to entertain listeners. Studio magic is fun as a sideshow, but make it the main event and you'll lose some of the musical magic that has made a cappella fun through the ages.

To purchase On The Hunt or any other Tigeroar album, please send an email to tigeroarmarketing@gmail.com.