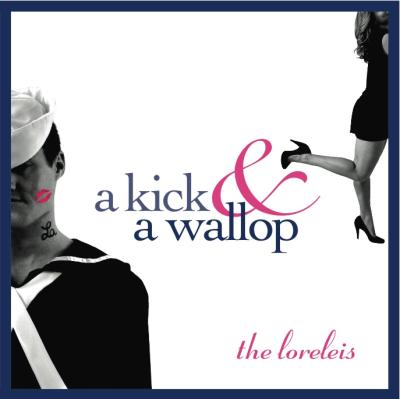 The Loreleis' A Kick & A Wallop is a misnomer. The album is mostly gentle, sweet, touching, and even cute. Few and far between are the moments of genuine kick or wallop. Perhaps not until Hate On Me (track eleven of thirteen) do we hear the album's eponymity, and even then the song's opening promise is never really fulfilled. This isn't so much a knock on the recording as a commentary on managing expectations and knowing your strengths. Trying to bust down the door with voices this sweet, and even restrained, feels futile.

2004's Take a Big Whiff! was sleepy and sloppy. 2006's Downstairs was a force to be reckoned with, with its head-turning leads. 2008's On The Record was a collection of deftly arranged ballads. 2010's Philophony woke us up and made us take notice again with leads like the incredible Starr Miller, and an impressive nine arrangements by group member Marianne Cheng (worthy of note since many groups seek arrangements outside their membership).

Though Ms. Cheng has her hand in five of the arrangements on 2012's A Kick & A Wallop (including the album's best arrangement, Plane), this album nonetheless still slips back overall. Where Philophony was lauded as "an impressive step forward in collegiate women's a cappella", A Kick & A Wallop stumbles as it tries to find itself.

Take Landslide: Emily Spokas' lead is beautiful and sweet, as is the blendful homophonic trio that follows her. But the arrangement's insistently sharp attacks on the guitar-ish "dang"s are like the flying brainbots in the movie Megamind; one almost wants to warn Ms. Spokas and her trio that these creatures are coming. This is a problem similar to the "electronic chickens" that open The Ballad of Mona Lisa. Both point to a pattern of lots of good and a bit of bad facing off throughout the album.

The production is surprisingly inconsistent from the normally reliable Dio/Dunbar/Vocal Source folks, ranging from the glossy pop smoothness of Misery (which sounds quite good), to the distractingly awkward EQ of Weightless (which is confounding and which also sounds like a rip-off of the groundbreaking Hide & Seek, but that similarity is not the fault of the producers or the group).

And then there's the live-sounding bonus track, Trees, which due to its live-ness displays the group in the raw, with intonation and balance issues and generally sounding like a different group altogether. Some effects on The Ballad of Mona Lisa and Impossible sound weird, but are also placed in the midst of other effects that sound cool. The octavized bass and driving vocal percussion sometimes sound just right, other times like they've been pasted in from some unrelated sonic world of aca-samples. It's hard to get comfortable here.

As regular RARB readers know, we've directed more attention to liner notes, in part to help stop the ongoing disrespect and disenfranchisement of an entire creative class, and also to provide praise when handled properly. Unfortunately, despite having access to many people who know how credits should be handled, the Loreleis' credits are woefully inadequate. "Original performers", or even worse, "in the style of", is no substitute for crediting all composers and lyricists by name. The original performer is certainly of interest to some readers, but the composer is an absolute necessity. This is mishandled on all but one track: the modern classical composition Trees is credited to Thomas Daniels, a UNC student. (But did he write both the music and lyrics? Who knows. That much we aren't told.) Hopefully, Mr. Daniels won't mind if, in the future, his song is credited solely to "originally performed by the Loreleis" or "in the style of the Loreleis" and his name is omitted entirely. I hope that sounded sarcastic enough; it is my sincere hope that, like all composers, Mr. Daniels' harmonically lovely piece is forevermore properly credited to him and that he receives his 9.1 cents for each copy made — whether sold at full price or given away for free.

Perhaps the Loreleis found themselves in a transition as A Kick & A Wallop came together. Both within and between songs, the Loreleis search for the group's identity, and yet listeners will perceive that there is not a void, but a "something" there, waiting to be discovered. Neither the Beach Boys classic nor the modern country twang seem to fit just right — the closest is probably Plane with its full exploration of the emotional journey and arresting arrangement choices.

Dare we hope for a complete album in that style? We do.

UNC's Loreleis have a very sweet sound on their latest album, A Kick & A Wallop. With such a sweet sound, though, song choice becomes crucial, and that's where the Loreleis struggle. By far, the best song on this album is Wouldn't It Be Nice. The song really captures the Loreleis' essence: it's a breezy, sugary pop song that sounds so easy and fun (and the percussion on this track is processed beautifully — it sounds perfect here!).

The problem on A Kick & A Wallop is that not every song present is this sweet, and the Loreleis don't always succeed on some of the tracks that should have a grittier feel. Album opener Shake It Out never really achieves the haunting depth of the Florence + the Machine original, and The Ballad of Mona Lisa just feels like it should have more oompf. This isn't really an issue of the arrangements, which are in general really intricate and interesting; it's just an issue with the voices in the group not being able to deliver a darker sound.

I love the Plane arrangement, but the lyrics have so much emotion behind them that I should be getting goosebumps here, and the Loreleis' version of the song never really brings me to that point. There are so many fun textures in the Misery arrangement, but the ladies can't really convey the anguish in the choruses. (There's one exception to my opinion of the group's arrangements: I don't love the Landslide arrangement — and the group incorrectly credits the song to the Dixie Chicks, when it was written by Stevie Nicks and originally performed by Fleetwood Mac — and the soloist loses all of the age and weariness of the original song.)

By contrast, the sweeter songs here sound great: Parachute finds a trance-like groove, and Gravity works well for these ladies (although they don't really bring much new to the song). There's a bonus track here called Trees which is ephemeral and ghost-like and delivered beautifully; it was written for the group by Thomas Daniels, UNC '12, and it really suits the ladies well. The songs here that succeed (or not) aren't really all that surprising: this is, as I said in my opening paragraph, a group that can make the Beach Boys sound awesome (seriously).

The Loreleis would be advised to spend more time thinking about song choice in the future — and specifically what kinds of songs/sounds can truly be achieved with the current voices in the group.

The Loreleis' latest album, A Kick & A Wallop, is a well-produced and well-sung album that is noticeably low on kicks and completely devoid of wallops. What it does have, however, is plenty of delicate crooning, some sassy hand-on-the-hip action, and maybe a gentle "love tap" in place of a punch. These girls aren't out to cause a ruckus or make a scene, and the overall tone of the album, for good or for bad, is one of unapologetic sweetness. There's nothing inherently wrong with sweetness, and the Loreleis knock it out of the park on a few tracks, but it's better to go into this album knowing what you're going to get: mostly beautifully crafted ballads, and even the deliciously mean break-up tunes are coated in sugar and a smile.

The best parts of this album are when the singers' inherent lightness and sweetness apply to the right song. The album opener Shake It Out is the perfect example, as well as being the standout track. The perfectly chosen soloist, the joyful sound of the background vocals, and an arrangement that soars and swells with the ladies' voices make for a great vibe. Other standouts include Parachute, with its sly and subtly sexy tone; Misery, which serves as a refreshing burst of attitude and sass; and the crystalline closing tracks Weightless and Trees.

Where the album falters are the tracks where the original songs call for a sense of urgency, aggression, or gravitas. Hate On Me is limp and underpowered, The Ballad of Mona Lisa is too restrained to match the drive of the original, and Girls Lie Too is all sunshine with no snark underneath, diminishing the irony that makes the original so funny and interesting. The problem with all of these tracks is the Loreleis' inability to add some spice. While I applaud a group that strives to maintain a coherent sound, the trick is to have variety without sounding scattered. This is a high bar to clear, but the Loreleis clearly have the ability to do it; case in point, if the album were condensed down to the five or six best tracks, it would be truly outstanding.

So what's the bottom line? A Kick & A Wallop is a mixed bag, depending on your tastes. If you're a fan of the lighter side of female a cappella, this is definitely the album for you. If you prefer your albums with a harder edge, you might just want to grab a few standout singles (I do, however, encourage everyone to check out Shake It Out). There's spirit and joie de vivre for sure, but whether or not it balances out the girlish saccharine is up to you.

This album, as well as the Loreleis' other albums, can be purchased via their website or directly via this form.