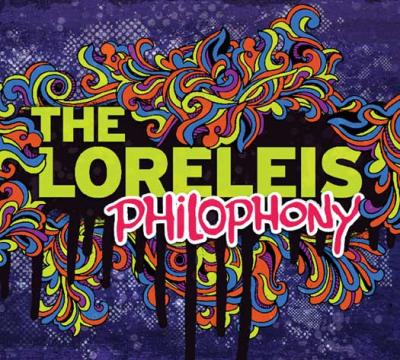 The Loreleis' latest is a collection of excellent leads, effective arrangements and crafty studio tricks. From intimate whispers to pop-tastic belting, this all-female collegiate ensemble delivers the aural pleasure promised in their album's title. Easily more than a yearbook album, Philophony brings musicality and creativity to every track.

First and foremost a group needs great soloists to do great pop. Thankfully, the Loreleis seem to be growing these in some freakish UNC Chapel Hill campus lab. And while so many of their leads are excellent, one voice does stand out, even in this impressive sea of talent: one appropriately named, Starr Miller. Ms. Miller brings rich emotion to Hometown Glory and gets us all fired up on the Jordin Sparks hit, Battlefield. Miller's raw power, compelling tone color, perfect pop phrasing and emotional vulnerability leave the listener hoping for a solo album. Adding to the allure, she's one of the few singers not visible on the website; everyone loves a mystery.

And speaking of stars, Marianne Cheng ('11) arranges or co-arranges nine of Philophony's twelve tracks, lays vp on four, and delivers a very interesting (if slightly low in the mix) lead over her own creative arrangement of Beauty and the Mess. Without question, Ms. Cheng exercises a strong hand in Philophony's success.

The production (inclusive of production, recording, editing and mixing) is an expected broth of tasteful choices with an unexpected light seasoning of clumsy and distracting ones. The production team of Diovoce/Vocal Source brings seven chefs to the kitchen here so it's not too much of surprise that the final product might hint at the well-known aphorism. Thankfully, the various spices still blend together for an overall "good" product in the end.

Programming critique: Hold the Line should not have started the album off, as it's the album's most troubled track. Yes, there's a great lead, but there's also some unintentionally goofy singing in both lead and back-ups. In Toto's 1982 original, as the melody climbs, the lead (Bobby Kimball) reaches ever higher levels of laser-like intensity. Here though, despite the lead's otherwise killer voice and impressive belt, the rising tessitura (particularly soprano E and above) evokes an ever increasing chipmunk-ish sound. When harmonized, the effect is increased.

Still, the Loreleis get their sound right more often than not and with one stellar lead after another and intelligent arranging, the album is an impressive step forward in collegiate women's a cappella.

I am not usually a fan of the a cappella ballad. I want up-tempo, get-me-going energetic numbers I can blast in my car with the windows down. Many groups tend to sag on their slower numbers, which feel a verse or two long, with not much more than a pretty solo to recommend them. So while Philophony has some great high-adrenaline ass kickers, I was most impressed by its ability to make me hit repeat on a nearly five-minute ballad. In waltz time.

The Loreleis' performance of Sia's Death by Chocolate is a great track with a sultry solo that builds to a gorgeous, gospel-inflected climax, and it may not even be the best song on the album. If Tha Mood (a Sing 7 selection), Hometown Glory, and Did Ya Think are all contenders in my book. This is, in short, a fantastic album with some talented musicians doing a variety of genres very well. There are ten soloists on twelve tracks who are all well-suited to their material, and there is not a weak performance in the bunch.

The arranging and the production complement each other essentially seamlessly. One of my favorite aspects of the album is the way it keeps its leads front and center, letting them steer the track and form the dominant impression even with sometimes dense or harsh textures behind them. Hometown Glory maintains its sense of forward motion and build despite being a percussion-less ballad, but never lets the listener take their attention off soloist Starr Miller, who just plain owns the track. Did Ya Think, in contrast, has a background filled with aggressively effected lyrics and distortion. Yet, again, Flerine Atienza's blistering solo sits right in the center, feeling supported by the wall of sound rather than buried in it.

The least compelling tracks, for me (though still well done), are those with a more conventional collegiate pop-rock approach, with Old Man being the prime example. While I admire the outside-the box notion of an all-female group covering Neil Young, the song as a whole feels too heavy, and the arrangement lacks the depth displayed in most of the other tracks. This is the cut I think I'd be most likely to find on another group's album, and I like the rest of Philophony so much for its unique voice that this quality is a disappointment. The irony is that on another group's album, it would likely be one of the stronger tracks rather than the weakest.

The only advice I have for the Loreleis is this: You have clearly figured out how to play to your strengths and establish a style that sets you apart. Keep doing that. Don't change.

It is probably an understatement to say that Philophony, the latest from the University of North Carolina Loreleis, is aptly titled. The definition of the word, according to the liner notes at least, is "the love of sound" or "an innate appreciation of aural phenomena". With this album, the Loreleis definitely demonstrate a respect for the medium and for what the human voice can do. They don't break any new aural ground, but they do perform quite well within their comfort zone.

Fortunately for us, this comfort zone includes a wide variety of musical genres. Just look at that track list: Esthero, The Veronicas, and Neil Young are not names you see very often covered a cappella. Even with more popular artists, the Loreleis choose less popular songs, like Sia's Death by Chocolate and Paramore's Crushcrushcrush. There is also plenty of pop and classic rock. Such variety provides the basis for a musical identity without being too boring, and every track exhibits a signature style. The foundation of this style is Marianne Cheng, who arranged or co-arranged nine of the twelve tracks. She seems to be most in her element when the backing blocks are richest, most notably in the exquisite swells and silences of Death by Chocolate and the surging tidal waves of sound in Crushcrushcrush.

Building upon this foundation are the performers themselves. Every single soloist is excellent, exhibiting a level of vocal maturity and control that are all too rare in the collegiate realm. In particular, Kelton Wright is deliciously sultry on the bluesy If Tha Mood, and Starr Miller puts her own soulful stamp on two very different songs, Hometown Glory and Battlefield. The Loreleis also deliver in the percussion department, equaling and occasionally besting their co-ed and all-male peers.

Philophony is not without its flaws. Cheng's pop arrangements are much less creative than her others, as evidenced by the uninspired guitar imitations in Hold the Line and Last Name. Otherside and Keep Breathing, repetitive songs to begin with, suffer further from lazy arranging and even lazier production. Finally, this eclectic song selection has an unfortunate byproduct: a somewhat confusing album that lacks flow and an overall vision. The pieces are mostly there, but they don't really fit into a cohesive whole.

Still, there is a lot to like here. I may not listen to Philophony from start to finish ever again, but many of these songs have certainly earned a place in my permanent rotation.