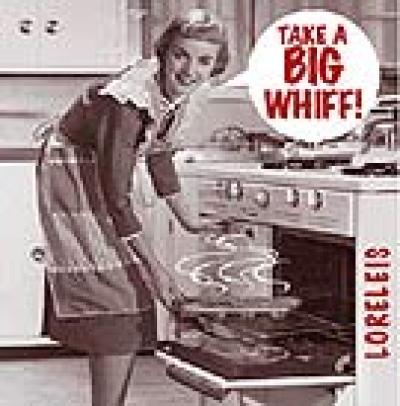 "Take a Big Whiff!" is not a great title for a weak CD. The Loreleis make all the classic mistakes on this release. Back-ups are high in the mix, enunciating ridiculous syllables to the detriment of the song. Soloists range from pretty good to "oooh... almost". The song choices seem a little anemic, and the arrangements just don't propel the songs forward. Worst of all, pitch and to a lesser degree, rhythm, are pretty loose throughout.

Whatta man is probably the most upbeat of the songs, which is welcome by this point in the programming. However, as one of the women comments on the recording as it fades out, "It's so white! I'm sorry!". Perhaps not the most p.c. term but pretty accurate nonetheless and not just for this track.

I found something a little charming about many of the soloists. But just as I began to nod in approval to the moderate to slow beats, every one of these leads seemed faced by vocal demands which exceeded her present skills. Blame may appropriately fall to short recording schedules or poor programming or an overly democratic assignment of leads. Only the Loreleis can say. But solving this issue is the first step in making a better CD.

The next step might be easing up a bit on the ubiquitous reverb. Silence, even in small doses could have added a lot. Autotune and a click track might have been advisable as well.

I felt bad not liking "Whiff". It's never a train wreck, never terrible. But too many moments can be too awkward, sloppy, or sleepy for me to give it a thumbs-up.

Can this really be the only album from the UNC Loreleis that RARB has reviewed? Hard to believe.

Seemingly in everyone's top 10, or even top 5 all-female groups, the Loreleis have been associated with first-rate collegiate a cappella probably dating back to their win of the inaugural National Collegiate A Cappella Championship (back then, it was just National) in 1996. Bolstered by this reputation and having previously heard a few selected tracks off their CARA-nominated last album One, I was very much looking forward to sitting down with their most recent effort — their ninth album overall, entitled Take a Big Whiff.

Long story short: for the most part, I was not disappointed. The Loreleis have fashioned an album which is always good, sometimes great, but falls just short in enough places such that I can't quite rave about it as much as I truly wanted to.

The material chosen for "Whiff" might best be likened to the TV station Lifetime — music originally performed by women, now being performed by women (with, I believe, the only exception being one song from Three Doors Down). Blissfully, it's not exclusively Tori Amos, Norah Jones, and Sarah McLachlan (actually none of those artists' work is covered on this album) and indeed, the Loreleis have mixed up the styles quite a bit so that the repertoire is rarely boring.

On a related note, the Loreleis have clearly made a conscious effort to "mix it up" when it comes to just about everything on this album. Almost every track features a different soloist and even the vocal percussion duties are passed around quite a bit. The results, while admirably egalitarian and particularly understandable for a collegiate group, create some problems. Though the group is blessed with quite a few solid soloists, there were a number of instances in which I did find myself wishing that a soloist from an earlier track had been allowed a second solo (e.g., Meredith Dillard from Mother Mother singing You're no good would have been particularly interesting to me, as would a stronger belter on Tomorrow, my "5" for that song notwithstanding). Even more noticeably, in the vocal percussion department, there simply isn't another Catherine Cheng in the group, and the songs that feature her v.p. work almost always stand head and shoulders above the rest of the efforts on this album (her award at SoJam was clearly well-deserved). Without the rampant use of the octave pedals employed by several other all-female collegiate groups who are often mentioned in the same breath as these ladies, the Loreleis, and Ms. Cheng specifically, provide ample proof that a solid percussion track can anchor a song and provide it with the "bottom" that it needs without an actual "bass" line (in the purest sense of the word).

Of course, the ability to do something different, and do it well, can be a group's own worst enemy and the ‘Leis are, to some extent, victims of the success they achieve on the first two tracks — the aforementioned Mother Mother (which was much talked about in the RARB Forum as a favorite from this year's Sing! compilation), and No Doubt's Don't Speak. Both offer full-sounding performances, rich arrangements, rock-solid v.p., and strong solos and provide an extremely ear-grabbing start to the album. For better or worse, the subsequent offerings suffer by comparison — in some cases, it is the absence of solid percussion as noted above (We Belong cries out for a good kick drum); in others, the arrangements sound a bit bland (You're no good and I don't want you to go); and in still others, the background vocals sound a bit mechanical, lacking in "feel" and overall energy (most noticeable at different times on It matters to me).

One final note about the production — another area in which the group "mixed it up" a little, having recorded in two different studios (though I was hard-pressed to tell the difference): as one would expect of anything to which Dave Sperandio is attached, the sound quality is excellent, and the mix is first-rate. My only quibble would be one I've brought up before — the seemingly recent tendency to place the lead vocal squarely "inside" the mix rather than "in front of" the mix. I've heard the reasons and I could argue the point either way, but the fact is that several solos on "Whiff" are lost in places as they are overwhelmed by the background block (Backseat of a Greyhound Bus is the most egregious), and I don't think there's ever really an excuse for that.

So having heard my first full Loreleis album, was it everything I hoped it would be? As someone who until a few years back had very strong reservations about all-female a cappella purely due to the inherent limitations on the "low-end", I continue to be surprised and delighted by the work coming from groups like the Loreleis (and the USC Sirens, and Tufts Jackson Jills, and Duke Out of the Blue etc., etc.). But given their reputation, fairly or unfairly, I guess I was hoping this album would blow my socks off and instead, I "only" enjoyed it very much.

There's really nothing new or exciting to behold on this latest album from the UNC Loreleis. I've heard rumors of their soaring live talent through friends and RARB Forum discussions, and while this may well be the case, it simply doesn't translate to recording. Alto II-heavy and with vocal percussion reminiscent of early rap beatboxing, Take a Big Whiff! leaves me asking, "Take a whiff of what?"

The arrangements and production do not lend themselves easily to the various genres of music appearing here. In the first verse of Mother Mother, the low "jmm-jigga-jmm"s make a nice rhythmic, punctuated accent under Meredith Dillard's kick-ass solo. Cue the mezzos on an eerie, nearly annoying "eeeeee" which descends each measure, following the chord progression of verse two. It is in the choruses of this track that nearly the entire disk may be summarized: alto IIs dominate the background with typical "bah-dah"s and "jah jigga-jah jah"s that leave the viewer straining to hear every other voice part save the soloist, and just barely. Tomorrow is the exception, with more emphasis on the middle voices and not enough on the lower ones.

It's clear, however, that these women can obviously wail. I would have liked to hear some engineering on the background vocals a la the guitar/bass effect on the Xtension Chords' Inside Out (appearing on BOCA 2001). Without it, the vocals feel stale. You're no good is also particularly bottom-heavy. The wide vocal range of soloists leads me to believe that the group indeed has some talented higher voices. The resulting sound on Take a Big Whiff!, then, is either a result of the arrangements or of the mixing and engineering.

Another failure of this album is the soloists' attempt to emulate the original artists who performed the songs. Don't Speak and Whatta man are specific victims of this decision. I'd have rather heard these women lend their own emotion and soul to the leads. The dual rappers on Whatta man don't always sync up well, and again, under them, the altos stand out most. What also holds most of these tracks back is the kick drum sound, usually produced ineffectively by a woman blowing raspberries at the bottom of her range.

Yet there are some sweet gems among the duds. It matters to me, a sappy Faith Hill ballad I'd never heard before, appropriately utilizes the full range of the female voice with background vocals that blend well and emphasize the head voice. Even if the arrangement is a little predictable and repetitive, this song plays on the best of the Loreleis' talents. Love will come to you also features some nice rhythm work and highlights the soprano section, but the soloist is turned down so much that she blends right in. The best track is saved for last, a group effort on a Sweet Honey song that appears too deep in the album in light of its excellence.

Before this album, the only Loreleis' song I had ever heard was an mp3 of Fame off of their 1998 album 116 Chauncy Street. Unfortunately, in 6 years, there's only been slight (if any) improvement in studio production, and not too much change in the way songs are arranged and recorded. Collegiate female a cappella doesn't have to remain sounding liked it was taped in the '90s. For excellent examples to study for their next studio effort, I strongly recommend anything by the USC Sirens or Ticket to Anywhere by Ladies First of Indiana University. Both groups demonstrate the same diversity of musical tastes with excellent a cappella interpretations while maintaining an identity unique to the groups' members.