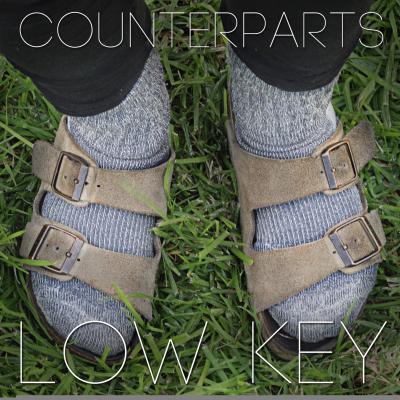 It's no mistake that my overall scores and track scores for Counterparts' latest album Low Key (can we retire "Low Key" as a group name and/or album title, please? This is my third album in a row incorporating this pun) look remarkably similar to those for New Wave. In truth, Low Key is probably a marginally better album, but not sufficiently so to score the group higher.

Once again, from a group I once venerated for its mastery of vocal jazz, we get a thoroughly ho-hum album of serviceable arrangements performed capably, if uninterestingly.

Quite frustratingly, better-than-mediocre arrangements continue to elude the group, with not a single arrangement developing significantly beyond its initial verse-chorus motif. There are a few fun moments early in a couple of songs (Love Is a Beautiful Thing in particular), but they're engaging for about fifteen seconds and become tedious for the next three-plus minutes.

Perhaps most aggravating — especially given the roots of this group — is a complete and utter lack of "feel" to be found anywhere on this album. Some of it must be in the root performances of the background blocks that come off as robotic and disinterested much of the time (how is that even fathomable in a song like Summertime?). Some of it is due to little or no attention being paid to dynamics whatsoever. Truly. The volume of the song is established at the top and barely moves if at all. And the volume of the next song sounds an awful lot like the volume of the prior song. Some of it is perhaps due to the studio work of Liquid 5th, which yields an overall sound quality better than New Wave but perhaps at the expense of preserving some of the energy of the original performances in studio.

But returning to the arrangements again: some of it is just fundamental in the artistic choices, which tend to rob what is the album's strong suit — a fair amount of quirkier, less-often-performed repertoire — of all of its individuality and character. These Days is a cheesy ballad to be sure, but as performed by Chantal Kreviazuk, it's a country-tinged, folksy tune. As rendered here by the big-voiced Maya Tepler, its grit is stripped away and its cheese is amplified in a rendering that smacks of musical theatre. Ditto for Paramore's The Only Exception, where instead of the edgy, angsty, go-for-broke Hayley Williams original, we get a cutesier, over-enunciated, show-tune-y take from the sweet-voiced Rebecca Scholl (who also arranged). Til You Come to Me is a nifty song choice, but the unusual and cool sound of the original's mellow guitars with violin countermelodies is nowhere to be found here. All that is special about Spencer Day's version has been smoothed out and re-processed as if for lite-FM radio. I felt the same way about My Heart, though in this case perhaps re-imagining the funky, sparing, percussive original as more of a monotonous, pounding dance track was purposeful; if so, though, I'm just not a fan of the choice.

Lastly, while I generally leave extensive liner note commentaries to other RARB reviewers, I can't help but be crazed by the labeling of Summertime as simply a "Jazz Standard". In the album's own syntax, I guess it makes sense since the group only credits the songs' original performers (along with the soloists and arrangers), and I guess this particular version of the song is not "originally performed by" anyone. But to me this brings home the importance — if not the legalities — of crediting composers as well. It's a ridiculous slap in the face to talents no less than the Gershwins (!!) to say that one of their greatest songs in one of their greatest scores needs no attribution simply because no one ever sang this particular version of their masterpiece. (P.S.: I believe Counterparts performed a 5/4 version of this song live back in the early '90s. They then recorded a more straightforward version on Explicit Groove, which had its own issues — but I'd take either of those over the one offered here.)

I will always have a very fond place in my heart for Counterparts. But more and more, it's becoming clear that that group is a thing of the past. Whether it's the jazz group I knew and loved, or even the re-invented pop group as crafted by John Legend, neither is really reflected in the group's most recent work. To quote another Gershwin song, the last few years have been pretty "blah, blah, blah" — and that was a (jazz) standard that never would have satisfied the Counterparts of yore.

Low Key is, in a word, consistent.

All eight songs have a similar moody, alternative, sophisticated vibe that illustrates Counterparts' "jazz and pop a cappella" niche. For me, the track listing was a welcome change of pace from the mainstream fare typically covered by collegiate groups. After a few listens, though, I started hankering for a change of pace. When all the songs are originally composed so similarly, there is a burden on the arrangers to pick out the inconsistencies and keep each song engaging.

All eight songs are relatively new to the Counterparts repertoire, having been arranged by a handful of members who graduated in 2011 and 2012. This generation seemed to agree that arrangements should be stuffed with countermelodies articulated on "doh", "doo", and "jen". With the consistent flurry of syllables, it is difficult to pick out the percussion and nigh impossible to differentiate between the grooves from track to track. Judging by sound clips of recent albums, this is a style of arranging that has become second nature for the group. What Low Key has over Afterhours (2011) or New Wave (2009) are some more consistent ears in the studio.

All eight songs sound lively and well balanced. One benefit of singing in a consistent style is that the singers can get confident with their delivery. It is impressive to hear such complexity performed so dynamically in the background across the album. Behind the scenes, the producers at Liquid 5th did well to keep everything in time and duck the levels on the less crucial, less in-tune background parts. Even with all the background punctuation in these mixes, there is a consistently pleasing, mild blend that still leaves room for the soloists.

All eight songs are headed by soloists that fall just short. The men aren't as suave as they need to be to match the likes of Al Green and Alicia Keys. The ladies do all right in the verses, but they get whiny in their upper registers when they need to be powering through the bridge. In their intonation and their delivery, the soloists consistently feel out of touch with the spirit of the song. Understandable, since the group does not provide many strong beats or full chords to establish much of a spirit — which brings me to the trouble with consistency.

In theory, Low Key is a very interesting album; all of the counterpoint probably looks exciting on sheet music and corresponds with the instrumentation of the original tracks. In practice, there is a fine line between consistency and monotony. The excitement of music lies not in consistency, but in contrast. I want to hear the transitions from whole notes to eighth notes, from silence to cacophony, from moody R&B to grungy rock 'n' roll. "Consistent" makes for lasting rehearsals. It takes a few more adjectives to make a lasting album.

First thing's first: Low Key is a really nice length. Eight tracks is just long enough to decipher who Counterparts is, but not so long that re-listening feels like a chore. This group clearly took the time to pick and choose their best offerings, and it's of great benefit to both the artist and listener. Seriously well done.

Low Key starts off strong with Love Is a Beautiful Thing, which sets high expectations for the rest of the album with its catchy groove. All you could want in a collegiate a cappella cover is delivered here: simple but effective backs, a talented soloist, and infectious organic energy. Summertime rises to the occasion, too. Soloist Eileen Cella's unique lyrical timbre harkens back to the opera from which the tune originates, while still infusing the jazzy edge we've come to know and love. In that vein, Criminal soloist Rebecca Cook offers her own light sweetness but touches well on the careless angst of Fiona Apple.

Things start to get a bit lethargic on The Only Exception. The slow but busy backs are tolerable through the first chorus, but it's clear by the start of the second verse that the arrangement lacks a certain depth. The addition of vocal percussion by the second chorus isn't enough to keep the listener invested. Til You Come to Me suffers similarly; the singing is good, but the arrangement becomes tedious and boring over time.

The musical build missing in these two tracks resurfaces in These Days. Layered rhythms create a nice motion in the second verse that accelerates the listener into the bridge. My Heart revisits the effective groove showcased in Love Is a Beautiful Thing. A punchy bass line and driving backs shuffle into the album's last track with ease. Overdone for sure and lacking any groundbreaking musical choices, Fallin' is a lukewarm closer. In fact, it's probably the weakest track on the album. But by the time you get there, the group has done enough to prove itself — so we hold on until the end. All in all, it's a pretty enjoyable ride.

UPenn's Counterparts offers an energized blend on Low Key that is often missed on collegiate albums. Room for improvement aside, it's a really nice listen that could appeal to folks far outside the group's friends and family. For the investment of time, energy, and money involved in creating something like this, that's a pretty excellent return.