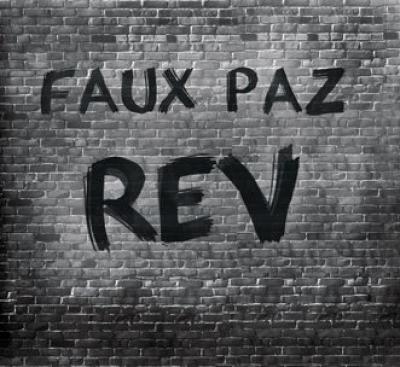 There's a great deal of thought that clearly went into Rev, the latest offering from the University of Maryland's Faux Paz, and whether or not every careful decision paid off, it's a treat to listen to collegiate work that offers up not only pleasant music but intelligent music-making.

Once again, as is a part of their mission, Faux Paz gives us an eclectic mix of repertoire with very little of the standard fare that one sees on album after album. Sure, there's Glad You Came, but it's paired seamlessly with Lovers in Japan, so suddenly it's not the same two songs you might have been less enthused about had they been recorded individually. Yes, there's Florence + the Machine, but it's Cosmic Love instead of the done-to-death Dog Days Are Over. And there's a Mark Ronson tune that isn't Valerie! Hurrah! It's one of the weaker selections here with layers upon layers of busy-ness that mask or outright kill whatever funky groove the song might hope to establish, but they get points for trying something a little different.

And not only for trying, but also for ordering their songs in a listener-friendly manner that really enhances the experience. It's rare that I comment on track sequence so you know they did something particularly right. There's a flow here that rocks just when it should and mellows just when it needs to slow down. It's a nuance that so many collegiate groups really don't seem to pay much attention to and they would be well-served to take a lesson from the Faux Paz here.

Also in the "well thought-out department" — the group enlists the help of three first rate mixers: the talented Danny Ozment from Emerald City Productions, located in VA and not far from the group's campus; the prolific and brilliant Ed Boyer of Sing-Off, Pitch Perfect and Beelzebubs fame; and the go-to guy for rap/hip-hop/monster drums, James Cannon. And if you're familiar with their work, they pretty much mix exactly the tracks you'd want them to mix, with Cannon handling One Republic and Kanye, Boyer tackling the more intricate and punchier-rhythmed songs like the Janelle Monáe pairing and Oh Land's Sun Of A Gun, and Ozment nimbly handling the rest. It's not just the choice to use professional, top-notch talent in post-production, but it's knowing who to choose for what material that can make or break a track.

Of course, you'll note that this isn't an album of 5s and in truth, there's a lot here that's very good but not quite spectacular on all levels. There are arrangements that just kinda sit there and never develop into anything interesting — The Lonely and Cosmic Love to name two — and some that are ambitious if unsuccessful like the aforementioned Stop Me and Gravity, which tries too hard to be a vocal transcription of the original's strings and ends up overwhelming and undermining the intensity of the solo (give me Sara Bareilles's a cappella original from Awaken's Dysfunktional Family Album even over her own instrumental version from Little Voice anytime — wow has it really been a decade since I reviewed that?!). There are glimmers of effective dynamics, as in the bridge of Animal, but there could be a lot more. Like a lot of current collegiate work, so many of the backgrounds are steady drones of mezzo-forte sound. As noted above, the production work on the mixing end is solid, but there is a lot of sybillence in the hihat and cymbal crashes and in general, there's a slight — for lack of a better term what I would call "trebley tinniness" — that pervades nearly every selection.

Fact is, if you're an a cappella fan and you like this material — much of which you may not hear offered a cappella as often as a lot of other contemporary fare — you'll probably dig this album, or at least you'll admire its effort. It's not one that I'm likely to go back to that often, but it's also one I want to hang on to, if only to appreciate it by comparison to a lot of the other, far less intriguing work that often comes my way.

The Faux Paz have certainly established themselves as the strongest a cappella group on the University of Maryland's campus. Rev is their first album since 2009's Busy Work, and it's good to see that the Faux Paz haven't lost momentum in that 4-year hiatus; Rev is another solid offering from this co-ed group.

Some of the best songs here are also the most unlikely: Celine Dion doesn't always translate to a cappella well, but soloist Laura Palantone nails the lead on I Surrender. Medleys are also hard to pull off, but the mash-up of Glad You Came/Lovers in Japan is really solidly executed. Both soloists on Sincerely Jane/Many Moons are good, but the second soloist (likely Tanya Dastyar based on the liner notes) is especially strong; the chorus of Many Moons is great. All of the arrangements listed here seem to be written/co-written by members of the group. David Todd is credited on several arrangements, and his arrangement of Cosmic Love is one of the best ones here.

Even some of the weaker moments are still quite good. The Sincerely Jane/Many Moons medley isn't perfectly cohesive, but each song stands well on its own. There are a few synchronization issues at the beginning of Cosmic Love, but the song quickly settles into a better groove. I don't personally love the mash-up of Eleanor Rigby with Christna Perri's The Lonely, but the Faux Paz execute the combination quite well, and it keeps the song interesting (I would've closed with Perri's song, not with Eleanor Rigby).

Ultimately, there's not a bad moment on Rev, making it an album that's very easy to listen to.

The group could've used a little more attention to detail in the liner notes though, as there are a few omissions/typos. There's no arranger listed for Glad You Came/Lovers in Japan, and there are vocal percussion credits for some but not all of the tracks here (I would have praised the percussionist on Cosmic Love by name, but he/she is not credited.) Gravity is credited to "Sarah Bareilles", but her first name is actually spelled "Sara". In addition, songwriter credits instead of just "OPB" credits would have also been nice. Mark Ronson was not the original performer for Stop Me; his version is a cover of the Smiths' song Stop Me If You Think You've Heard This One Before. Ronson's version included the lyrics to You Keep Me Hangin' On, which the Faux Paz also included here — a credit back to the Supremes and the songwriting team Holland-Dozier-Holland would've been a nice addition. Similarly, there's no OPB or songwriter credits for Eleanor Rigby on the mash-up with The Lonely. Some of this might seem like nitpicking, but just a little more attention to detail in the liner notes would take their finished album from the work of a good college group to an even higher level.

They could have called it Rev and Idle. On this fun but somewhat inconsistent album from UMD's mixed group Faux Paz, there are moments of nuance and beauty, moments of power and frenetic energy, and sadly, moments of sagging muddiness and detached aloofness.

Though the introduction may not have tipped you off, I actually like this album quite a bit. The strongest moments are some of the best collegiate tracks I've heard all year, whether they are crackling with electricity (Marchin' On), haunting with sinister and ominous atmosphere (Lost In The World), bubbling with heartache and regret (Gravity), or some combination thereof (Cosmic Love). On the other hand, there are some tracks which miss the mark for various reasons. I Surrender is appropriately mysterious, but it also sounds muddy with some intonation problems. Stop Me starts off with an intriguing little fugue but quickly heads south with the harsh syllables and a feel which is choppy and distracting.

The underlying strength of the album is the group's efforts to innovate. Though four full or partial mashups/medleys might be considered a little excessive, the idea here is admirable. These songs, along with those altered from the original in other ways (modified introductions, textures, etc.), are interesting because they're not carbon copies of the originals. The insertion of Ke$ha's Animal into the oft-covered and otherwise predictable Neon Trees song of the same name is by far the best moment of that song. Removing the harsh autotune effect from the intro to Lost In The World allows a cappella music to sound beautifully (and naturally) vocal. Other times, the change is less successful (ditching the raucous and dangerous feel of the Janelle Monáe songs results in a mysterious but ultimately repetitive and safe medley). The group also rightly acknowledges that sometimes hewing close to the original is still the best way to go (the sweetly lush Gravity).

Production is generally good, though there are some problems with muddiness and washy backgrounds, and some of the solos are a little hidden. A few of the standout production moments are James Cannon's crunchy, punchy, dark work on Lost In The World and snappy, crisp, and lively work on Marchin' On; Ed Boyer's atmospheric swells on Sun Of A Gun and arpeggiated twinkles in Cosmic Love; and Danny Ozment's swirling, dreamy backs on Glad You Came/Lovers in Japan.

One programming note: the song selection generally features a fairly dreamy and dark color palette throughout. I therefore like the choice to start and finish the album with two of the catchier, brighter songs (Animal and Marchin' On). While it is not perfect (a little thin and simple), the latter is great fun and a great way to end this album: not looking back, but instead stomping energetically towards the future.

I hope Faux Paz does just that, putting one foot in front of the other and marching toward their next album building on many of the promising approaches featured here. For now, though, Rev is a good listen with some exciting moments and a lot of promise.

Physical copies of REV can be ordered from the group's web site. The album is also available for digital download from Loudr and iTunes.