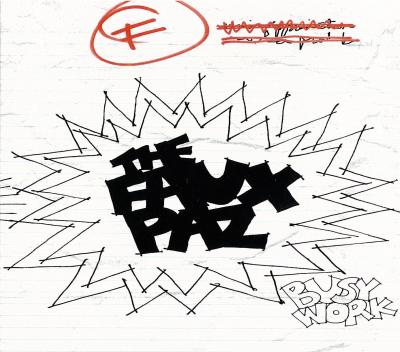 This is my first go-round with the University of Maryland Faux Paz in recorded form and to say the least, I'm extremely impressed. As near as I can tell, this is at least their fifth album release. But from the sound of the RARB comments on CDs of yesteryear, this is really only the second that fully taps into both the group's and technology's potential for a fully satisfying recording. Although I haven't heard their 2007 release Crisis Control, my sense is that the group has advanced even further since then.

The two characteristics of the Faux Paz familiar to me prior to listening to Busy Work were their choice of somewhat eclectic, somewhat offbeat repertoire and the enthusiasm and enjoyment of their live performances. The former is very much present in the track list of Busy Work which includes tunes from The Veronicas, Charlotte Sometimes, Rilo Kiley, The Zutons and London Pigg — not artists I've frequently, if at all, heard in a cappella covers. The enthusiasm and energy component is less present than I might like, sacrificed, it seems, to the gods of studio wizardry in the forms of James Gammon, Tat Tong, Dave Sperandio and Ed Boyer. (Oh yeah, and just for good measure, Bill Hare mastered the CD.)

Now before you think this is going to turn into another of my rants about post-production trickery, it's not. For the most part, this is an expertly recorded album which succeeds in preserving the humanity of most of the arrangements and even of the VP sampling and sequencing, which so often on contemporary a cappella albums sounds super-human to my ears. The Faux Paz get a bit tripped up when the bells and whistles of the studio sap a bit of the energy from the performances which, for all their processing, have a mechanized quality that is less engaging. They succeed in showcasing their oft-terrific soloists whose passion and power are front and center, but I found myself wishing that the background work had a pulse provided more by human emotion and energy than by a steady, sampled backbeat.

My second objection is perhaps a quibble; a few arrangements feel as though they were specifically conceived for studio performance. Whether these tracks can be performed live is outside my mandate as an RARB reviewer. That said, the Faux Paz's own arrangements offer some insight into their capability to perform naked vs. processed sounds. The results are a mixed bag. For example, Bright Lights and Soulmate both begin with quasi-acoustic openings for the first minute. When the octavized bass and vp kick into the former, it somewhat exposes how the purely "vocal" portion of the arrangement can't really sustain itself and begs for the bass and vp to bail it out. The reverse is true on Soulmate where the interior arrangement, though not particularly complex, does seem as though it could carry the song through, which in turn makes the bass and VP valued enhancements rather than life's blood. Mercy on Me is yet another example — one which doesn't entirely work — but where Dio's shunning of a thumping bass puts even more emphasis on the interior voices. It should be noted in nearly all cases (Valerie perhaps being the one exception), the Faux Paz's finished work is absolutely sonically pleasing. But craft matters too, so the builds and variation in 4ever and the rhythms and variation in My Sin, are what make them better than the endless repetition of Flashing Lights and the plodding of Sailed On.

Of course, to be able to take issue with nuances of arranging and studio technique, as opposed to tuning, blend, soloists, song choices, etc. means that we must have a pretty darned good album on our hands. And we do. If you like this music, you will like this album — the minutiae that we RARB nerds obsess over be damned.

The women soloists definitely have the spotlight on Busy Work. There are a bunch of capable Sasha Fierce figures behind these microphones, giving The Veronicas, Natasha Bedingfield, Charlotte Sometimes, and Christina Aguilera a run for their prowess. The overall balance on group sound is much improved from their prior album, Crisis Control, but the women are still wearing the pants in these parts. Once again, Amanda Jabes (Soulmate) stands out for her vocal maturity and badass technical abilities.

Some tracks leave a mark. Their opener, 4ever, is super glossy and commanding. My Sin has an explosive beginning and a red-hot sexiness that the group easily conveys. Mercy on Me is strong and captivating. And the group proves they can get down with their bad selves on the playful When I Get You Alone.

Missing from Busy Work is the unique Faux Paz sound created on previous releases. These arrangements sound standard, absent the funky syllable choices and the extra touches of pizazz we were treated to in the past. What we hear now sounds like any decent collegiate group, with capable mixers and a cohesive sound, but it's not a super-special sound. A saving grace here is the group's efforts to include some lesser-known material alongside well-known tunes.

Their choice of closers, Sailed On, is thoughtful, unique, and gives the album a nice "we've come to the end" feeling. And really, it's a nice album. It just lacks any truly dynamite arrangements, which seems to undermine their album art of a dinosaur riding a tank. (Amazing.) Next time, let's get a similar cool sentiment to come through on the arrangements!

Halfway through my initial listen to Busy Work, I wrote down the following: "Very, very good album. Essentially no weak points.". After that listen, and several more to boot, there are a few flaws that stick out; however, I still believe that this is a very, very good album, and I give it a very strong recommendation.

Before I get into the flaws, let me spend some time on the album's strongest feature: the soloists. I was blown away at the quality of the soloists on this album: far, far, better than on the typical college album. In fact, many of the soloists here are better than those on the professional albums I have reviewed. That item alone makes this an album worth purchasing.

Although there were some good male soloists, the strength lies on the female side of the fence. All the female soloists except for one (on Valerie) are simply outstanding. To name a few of the best: Amanda Jabes in Soulmate has the best performance of the album. She does everything you can ask for in a soloist: hits notes spot on, uses vibrato when appropriate, has a warm but not overbearing vocal quality, and effortlessly covers the entire range. She has an interesting enough voice to carry the song even though much of it doesn't really have anything else going on. I would rate Mala Sathe on How I Could Just Kill a Man just a notch below, maintaining all the same positive qualities — to the degree that I suspected it was the same soloist until I checked the liner notes. The soul and passion Crystal Thomas conveys in Mercy on Me reminds me of Maria Spear from the Dicks & Janes song Blues in the Night, which listeners may know from Sing 2. How many albums are there where you can say that the third best soloist is reminiscent of one who was nominated for a CARA award? Becca Newell on Portions for Foxes is also very, very good. Whoever arranged the dynamics deserves credit: just past the midpoint, the song quiets down, and Ms. Newell comes in with a very quiet but emphatic "It will all be, portions for foxes.". Anyone can grab your attention (for good or ill) by singing loudly, but it takes real talent to be able to grab a listener's attention by singing softly. Wow.

Now for some flaws. 4ever begins with a very dry "bump bump ba-nump" line that contrasts oddly with the rest of the song and with the rest of the album. It sounds better after the soloist and vp come in, but it was a strange way to open the entire album! In Bright Lights, the duet part — the only part other than the soloist that sings words — is too soft; for some reason it is much softer than the less-important background vocals. In When I Get You Alone, the highest notes were just outside the male soloist's range. Valerie, already mentioned, was simply a disaster and should have been left off the album. The soloist was shouty, without proper vibrato, and especially late in the song her "valer-ay-ee-ay-ee" was painful to listen to.

The attentive reader might wonder why, when I have given the album so much praise overall, it wasn't worthy of a "5" in my estimation. Part of it is due to the flaws mentioned above. However, the main reason is that the arrangements were almost all very standard. They did not push the envelope away from the seems-typical mixed gender collegiate group these days — solo/duet lines being the only parts with words, bass line changing pitches once a measure, well done but repetitive snare drum vocal percussion, occasional bass drum hits, and the other parts singing background vocals with your choice of syllables: "ah", "wah", "doon", "djinn", etc. I also felt in some cases that the Faux Paz could often have added just a touch more precision and punch. The end result is certainly nothing to be ashamed of, though, and I suspect I'll be listening to many songs from this album for years to come.