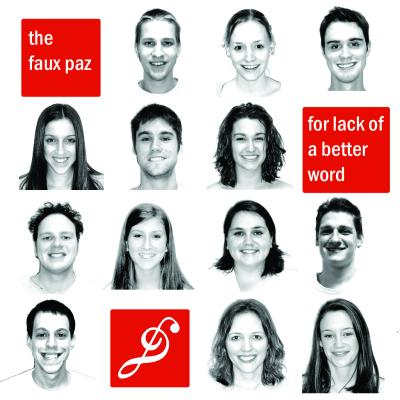 I know there is good in you, Faux Paz. I've felt it ... on your previous album, We Steal Your Songs. For Lack of a Better Word feels like it should have preceded the group's excitingly promising 2004 album.

We Steal Your Songs revealed a group with solid skills and heady potential. The album's arrangements were creative and well-executed, showing a smart and talented crew with the brains to break out of collegiate a cappella obscurity and onto the national scene. The album's ball and chain was the group's mixed crop of solo talent. Lacking a few top notch soloists and sporting a few mediocre ones, the Faux Paz were stuck working with what they had.

For Lack of a Better Word is a step back. The Faux Paz are still clever — wielding insightful syllables, nicely crafted chords, and a mindful control of intensity, but these qualities are difficult to hear. For Lack of a Better Word is a studio album, but only in the barest sense. One group member confessed that the album was "kind of a low budget thing for us", recorded over 36 hours. In the studio, the group was arranged on risers and area miked with just two mikes. They used no reference tracks. Soloists and VP were tracked separately. The album was chosen a la carte — the group recorded many single takes for each song and picked the best one. The engineer applied no post-tracking effects beyond reverb and wide-band eq. In other words, studio without the studio magic. Few recording approaches are more challenging. The difference in the quality of For Lack of a Better Word and We Steal Your Songs is obvious and easily explained.

Anyone with experience in studio recording and a cappella is likely to have entrenched expectations of albums created this way. I would expect a distant and vague background, rhythms that ebb and flow, and intonation problems in the higher voices. I'd guess at a blanched tone and patchy blend, and I'd hope for earnest energy. For Lack of a Better Word isn't too far off the mark.

Let Go embodies the worst qualities of the album. The song's background is pathetically limp and mushy throughout, wading around confused then mumbling down cascading open vowel sounds. Background singers abandon the soloist in the choruses, becoming less defined, quieter, and less energetic. The percussion is so inaudible that it fails utterly to add drive or contrast to the song's washy, open tones. As on most tracks, the soloist is eager and basically pleasant, but more detailed miking and compression would have made her performance easily twice as engaging.

At its best, For Lack of a Better Word shows a connection to the Faux Paz of We Steal Your Songs. The group accents its pop/rock set with syllables like "skahdosh" (Bring Me to Life). The director builds and relaxes songs to achieve emotional journeys (1979). The group reveals an adult sincerity while showcasing its dynamic nuance and a lovely, tender soloist on Ani DiFranco's Both Hands.

But all these good qualities are muffled by several feet of air, the unbridgeable distance between two area mikes, eleven background singers, and a single take approach to recording.

Often I wonder what a group thinks of its album before they decide to send it in to RARB to get reviewed. Sometimes I wish that I could be a fly on the wall — listening in on the conversations and comments made during the recording process. I'm sure that I would find it fascinating. For Lack of a Better Word, the newest recording by University of Maryland's The Faux Paz is a study in contrasts that seems to demand a prior knowledge mindset to get the full appreciation of what they are serving. The contrasts are enough to make me question their intentions. Were they pre-determined (and therefore intentional) or were they the result of under-realized strives for perfection?

The album is full of songs that are hot arrangements rendered in cold performances. The arrangements have a pop and zing — even the syllables used are fresh and entertaining. But the overall results lack the spark to keep the listener interested for more than a few seconds. Bring Me to Life and 1979 are perfect examples of this problem. With Bring Me to Life, the screaming tenor line made famous in the original is rhythmically draining and de-energizing on this recording. Actually it is quite square, which does no justice to the arrangement or the rest of the performance. Whereas, the tenor syllables "ka dosh dosh, ka dosh dosh" in their moving lines are engaging. The more that I listened to song, the more I found myself singing along with them and not paying attention to the rest of the song. The same focus pull occurs in 1979 with the altos. Their "sha na na na na" running line bounces along and completely captivates this listener. It is musical, with nice swells and pacing. I honestly can't tell you much more about the rest of the song ... and that's a shame.

The Faux Paz also continue to position themselves as Off the Beat-lite. That's all fine and good. There are worse aspirations. The track list is a nice mix of alterna-college radio fare with Let Go, Lazy Days, Three Libras and Both Hands buffered with more mainstream selections like Bring Me to Life, Breakaway and Iris. But where Off the Beat uses the studio enhancements to fortify their hard-edge alternative veneer, The Faux Paz went with a more naturalistic approach to this album. It is a strictly bare-bones soundscape, like they wanted to deconstruct what is means to be to be more rock oriented a cappella group. Again a fascinating conversation that I wish I could have been a part of. There is no discernable use of auto-tuning to correct the occasional pitch and intonation problems. The excellent vocal percussion is decidedly organic and the looping seems to be kept to a minimum. What emotional conviction is evident in the soloist's performance isn't manufactured. They either have the chops to make you want to listen to the song, or they don't. The Faux Paz doesn't make excuses either way.

I know that I'm also a study in contrasts as well. Don't get me wrong, I'm aware of this fact. That's why most of you won't find it shocking when I say that I like this album. There is something that titillates my senses in the earnest quirkiness. Actually, I know that it is because of two songs: Three Libras and Both Hands, two arrangements by Prabu Chandar. I've said in the past that Chandar is a great vocal percussionist; well, his arrangements of these two songs have earned him even more kudos. The arrangement of Three Libras creates an amazing foundation for soloist Robin Preator to create a grounded melodic line that is mesmerizing in its ability to capture the listener's attention. Also, Chandar's subtle addition of With or Without You paired with Jackie Conegdo's sweetly folksy rendition of Ani DiFranco's Both Hands is pure genius.

The arrangements are all dense and interesting on For Lack of a Better Word. Actually, the arrangement style creates a sound much like late 90s East Coast a cappella. I was continuously reminded of Off the Beat's 1998 album Patio during For Lack of a Better Word. I would find this approach fun if For Lack of a Better Word's mixing was improved and the intonation was better. I also really enjoyed the track list. Lazy Days, Three Libras and Let Go translate well to a cappella, and Zombie really fits the aforementioned 90s East Coast a cappella style. Most of the soloists delivered commendable performances, most notably Robin Preator on Three Libras, Jackie Congedo on Both Hands and Lauren Levine on Zombie.

There are some serious recording issues, however. I'm not convinced all the singers were on their own mics. They need to be, especially if words are being sung. And if they all had their own mics, then lines were turned down at inappropriate times. (What happened to the counter-soloist on the choruses of Bring Me to Life, and at the end of Both Hands?) The percussion is buried and distant throughout, and several of the songs had weak or erroneous starts that could have used another take (Bring Me to Life, Three Libras and Breakaway). Finally, The Faux Paz need to keep a tight rein during loud choruses, as their enthusiasm tends to create flatness and blend is abandoned.

The group's intensity leads me to believe The Faux Paz would really kick live. As it stands, you can take or leave their product For Lack of a Better Word.

To order this album email the group or visit the group's website.