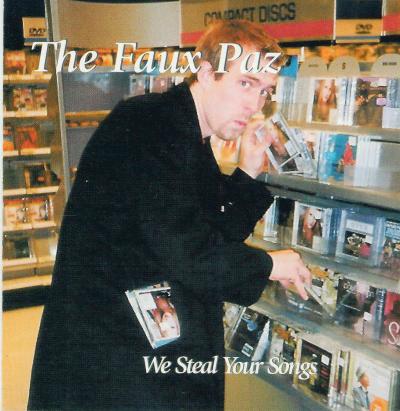 The University of Maryland Faux Paz offers a record of the line-up that went to Lincoln Center in the 2002 ICCAs, and the first three songs comprised their set at the finals.

We Steal Your Songs is one of the more ambitious collegiate albums I've come across lately, particularly in terms of challenging solo choices. For the most part, they keep their heads above water, but you can hear the furious paddling they need to do to stay there; they never embarrass themselves, but with a few exceptions, they just don't blow it out.

Solos are the biggest problem on the album. Melissa Spence is firmly in charge on Karma Slave, the best track by far. Most of the other leads, while decent, strain on the high notes (Everlong; Freedom) or lack the ease and power the song demands (Either Way; Drive). Worse, even the best leads are often drowned out in the mix, a pet peeve of mine. It sounds like Lane Bruchey is doing a great job on Turn Off the Light, but for some mysterious reason, she's drowned in the background. Let your soloists wail!

Tuning and blend are, again, solid overall, but not fabulous. The chords of Either Way aren't quite perfect, and the basses screw up the intro on Freedom, which is no way to start what ought to be a showstopping song. Freedom, like Stay, also suffers from intrusive, distracting block syllables that prevent the song from coming together well.

The group sings with strong energy and the arrangers put obvious effort into the mainly alt-rock set list. I'm focusing on the negative here not because I don't like the album (I do). I'm doing it because The Faux Paz are so firmly above average on what is only their second album that I don't want to hear fixable problems holding them back. I want to hear them rip all the songs in half the way they tear up Karma Slave. When you listen to this album, it's so clear that they should be able to. The Faux Paz are already aiming high. The next shot just might hit a bull's-eye.

We Steal Your Songs changes how I view a cappella at University of Maryland. Having lived in nearby Washington, DC for three years, I had opportunity to see shows and perform with singers that came out of the school. I'd always considered the a cappella scene there to be pretty typical of mid-Atlantic a cappella; entertaining, competent, but nothing special. The Faux Paz surpassed my expectations and left me pleasantly surprised with an album that's musically solid, well-engineered, creative, and a pleasure to hear.

A huge, hearty thanks to The Faux Paz: thank you for exercising a restraint that reveals wisdom beyond your years. First, you chose to submit ten well-crafted songs on a 45-minute album that feels like an album rather than packing the tracks on a marathon of crap. Second, your album stands out for what listeners won't hear: impact that isn't overdone.

We Steal Your Songs is energetic and creative, featuring many songs that build throughout. The majority of soloists do a great job selling each song, especially Karma Slave, a driving song about reincarnation and my favorite on the album. Its blazing chords and fervent solo performance combine for a sparkling first track on the album. Turn Off the Light and Freedom feature similarly energetic soloists and active backgrounds. Possibly the strongest emotional journey on the album is Here with Me, with a fluid, sensuous solo, a brooding, building background, and excellently mixed vocal percussion.

The album is musically solid, though not perfect. The intonation is very good, an important quality considering the dissonant chords and passing tones in many of the arrangements. The group's blend is nearly "5-worthy" except for a sometimes "doh"-pey sounding bass section and a few spotty moments in the higher voices (All Been Done, Turn Off the Light, Drive). A minority of soloists sound inexperienced, with pleasant vocal tone but more mediocre style. Two or three songs are competent but not particularly inspiring.

Though The Faux Paz clearly show their skill and good musical judgment on We Steal Your Songs, I suspect that more than a little of the album's high quality is due to an experienced and tasteful set of ears in the studio. Good compression, miking, and reverb/delay compensate very well for soloists with less style and technique. For example, the soloist on Freedom is less than agile on some of his R&B turns, but good studio work refocuses attention on his intensity, leaving him sounding like a pro. Moments of warmer, heavier equalization of the VP and bass parts ratchet up the tension in choruses and bridges. Creative panning of vocal percussion and a few solo phrases creates a sense of sonic perspective and excitement.

Two flaws mar the otherwise excellent studio work. First, the soloists and VP in a few songs sound brittle due to over-excited treble eq. Second, an overuse of the left-to-right-and-back snare tongue roll in Either Way and Dreaming of You is the album's solitary nod to collegiate overdoneness.

I'm impressed. Without being a collegiate super-group or part of the financially loaded Boston a cappella scene, The Faux Paz show that good albums come from those with taste. We Steal Your Songs is too refined to commit any of the typically collegiate musical faux pas, a fact that every listener can appreciate.

Woo, I'm so funny. Whew. See, the title of The Faux Paz's album from University of Maryland is We Steal Your Songs and I just thought that it would be super cool to write "Steal this CD", because of course no one else would be brilliant or witty or funny enough to make the same connection to the topical discussion on collegiate groups paying royalties or downloading music from Win-Zaa-pheus.

Funny, I tell you.

The group has a repertoire just this shy of being too esoteric for the mass market with a bent towards the adult contemporary vibe, which makes for some really interesting music, if not the most energizing and invigorating set.

Three soloists stand out as stellar among a field of competent performers. I've seen the group perform live, and Melissa Spence's captivating Karma Slave and Mark Forrer's ethereal Either Way are masterfully reproduced here. But the real gem of the album is Lane Bruchey's delightful turn on both Turn Off the Light and Here With Me, two stylistically different songs that she imbues with genuine emotion and artistry.

Drummers Josh Korr and Prabhu Chandar are at the top of their game. I know that Prabhu is graduating this year; here's hoping that some post-collegiate group will convince him to continue doing what he does exceptionally well.

The arrangements are holding this group back from making a really excellent recording. Except for Karma Slave and occassional peeks at glory in other songs, they come across as being too easy and staid for a group of this caliber and eccentricity. Block chords often sit like leaden weight in the arrangement instead of providing a strong foundation for musical exploration. Rhythmic passages that are supposed to be syncopated are so dominant on the 1-2 that that's all I hear in one of my favorite songs (FREE — DOM, 3, 4, come on, COME ON!!). The group doesn't shift dynamics once a song starts. Next time, make the fortes forte and the pianos piano. You can do it.

The album is worth stealing; I just wouldn't advise anyone to do it.