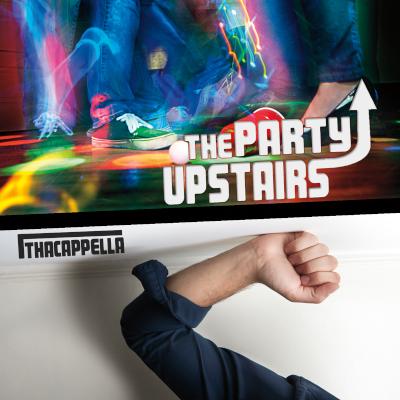 Ithacappella threw me for a loop with my first impression of The Party Upstairs. I was expecting a collection of uptempo dance anthems, the kind that, if played too loudly, would make one's downstairs neighbor pound on the ceiling, as implied on the album's cover.

And, sure, there are a few great party songs here. Especially of note is album-closing Too Close, which slinks in with a sultry lead then explodes with energy. But the more moving songs on The Party Upstairs are the ballads. The guys of Ithacappella have done the unexpected, turning Rihanna's party track We Found Love into a tender love song. The arrangement here is outstanding; Ithacappella alum David Geary is to be commended for how he's built this compelling cover even with some highly repetitive lyrics and without the help of the synth beats that drive Rihanna's original. Soloist Chris Frost truly delivers here as well.

Ithacappella has chosen an interesting track list on this album. Assassin is a perfect match for soloist Jason Wilber, who sounds like John Mayer Jr. I Won't Give Up has been covered a lot of late, but Ithacappella (with the help of arranger Rob Dietz, currently on staff at RARB) does a beautiful job with it, slowing it down a tad more than usual, but really settling in to that unexpected tempo to draw out more drama in the song. What keeps these tracks sounding so fresh in many cases is the percussion, which keeps time in an understated way, without being flashy or overtaking the singers. I would give kudos by name, but the vp isn't credited on the album — although Ithacappella has done a great job of crediting original singers, songwriters, and publishing companies.

The only problem with The Party Upstairs is that every track isn't a home run. There are a couple of forgettable versions of overdone songs: Mirrors and Some Nights are both well-sung and energetically performed, but the singers don't add anything that you haven't heard before. Those few predictable covers aside, Ithacappella has recorded a solid album here, just check your party-anthem expectations at the door.

The Party Upstairs by Ithacappella is aptly named. Each track embodies some element of a typical party environment in some way. Ithacappella manages to add a bit of flavor to current hits, as well as bring some new energy to older selections. While I find myself not in love with every track, I cannot deny that these guys have a knack for making songs sound really good.

For starters, Green Light is a great choice for an opener. If I entered a party and this track was playing, I'd head straight for the dance floor. The song has a typical club sound, a steady groove with simple percussion, and the bass is very prominent (as it is with most songs on The Party Upstairs). What further assists the track are the lively leads, especially in the energetic rap section.

From here, the party switches gears with Mirrors and As Long As You Love Me. The former is a fairly simplistic arrangement with creative moments incorporated throughout, while the latter opens in a ballad fashion transitioning into a hip-hop track. Both keep the party moving.

What's surprising at this party is the ability of the downtempo selections to have such a profound effect in the midst of such hard-hitting tracks. The A Team manages a strong grasp on rhythm while maintaining a light feeling that drives the album in another emotional direction. In my opinion, every album needs at least one track without percussion to allow the pureness of voices to shine through, and this track does that well.

Although it is being covered more and more, I Won't Give Up still has something refreshing about it. Ithacappella's version has more of an emphasis on harmonies, which are well-placed, allowing a stronger connection to the lyrics.

Lastly, I would be remiss if I didn't mention The Man Who Can't Be Moved. This track is ready for some major airplay. The lead is stellar, the voices blend well, and at certain moments, it's as if this track is being performed live in a concert hall. The singing is that pure and captivating. This is easily my favorite track.

There are one or two flaws that slightly derail this party, however, but only slightly. First, the bass can get overpowering at times. At these moments, one needs to step outside and regroup. This note is mainly in relation to the first half of the album more than anywhere else. I would have preferred for the mid-range voices to be brought out more and to have the bass reduced a little.

The other minor flaw would be a song selection or two. Some Nights has run its course at this point, and Undone, while solid, has a hard time standing out among other captivating arrangements. This being said, neither song is bad by any means.

There's no question that you should purchase this album. Ithacappella knows exactly how to produce high quality material and The Party Upstairs is a great testament as to why.

What The Party Upstairs has going for it, it has in spades: smart arranging, powerful energy, phenominal solos, and dynamic song choice. Even the song order is thought-out; it's like having a personal concert whenever you want it. I suppose I shouldn't expect anything less from a product CARA-nominated for Best Male Collegiate Album of 2014, but everything about this album screams professional entertainment. Even the packaging is almost immaculate: detailed liner notes, appropriate artwork and imaging, even a warning to "Leave your keys at the door," concerned it might be too much for the listener to handle.

The arrangements are the highlights of this album. Almost every song pops a unique transition at the exact moment it could get stale. There's outstanding use of secondary songs (As Long As You Love Me, We Found Love), in which the arrangers perfectly capture the emotional message in the second song's lyrics. The best arrangers know when do the least but engage the most, and David Geary and Peter Blanford have an exceptional ear for such timing. I hope Blanford appreciates the compliment I'm about to give him: We Found Love's arrangement is second only to Chris Rishel's Voices in Your Head version (BOCA 2013, a must listen). Blanford's composition knows where to be soft and where to be strong, and it stays true to the music of the original while simultaneously expressing an entirely different attitude. Meanwhile, Geary has quite the talent for linking his background singers to the soloist, passing the baton of focus between them. His magnus opus in this regard is The Man Who Can't Be Moved, with a chill-inducing lift at the end of the first chorus ("I'm not moving"), followed by a beautifully-stacked chord swelling to the second verse.

The soloists also impress. David Allen and Chris Frost have the greatest control in the upper register, Jason Wilber was born to sing John Mayer, and Cody Ripa's full baritone color in Below My Feet is beautifully warm. Topping off his arranging success, Blanford glides smoothly through Brand New Jones and its register shifts.

So, why not a "5"? Unfortunately, a handful of clunkers rear their heads. The high notes of Mirrors are clearly out of Mark Farnum's range. Ripa has same problem on Too Close, and both of them often fall out of tune. Both songs are also far too produced in comparison to the rest of the album. Too Close is definitely not the impression to leave as an album closer. And unfortunately, Some Nights and I Won't Give Up, already overdone, are merely average. Despite the great insert, I am extremely curious why the soloist for I Won't Give Up was left out of the liners. In addition, where are the percussionist credits? That absence, plus some overproduction, indicates a drum kit, but at best it's a lot of unthanked work.

That being said, the overall product is worthy of your time. Skip the tracks you dislike, and I guarantee there will be enough of the ones you love to keep you listening for days.

This album is available for download on iTunes and Amazon MP3.