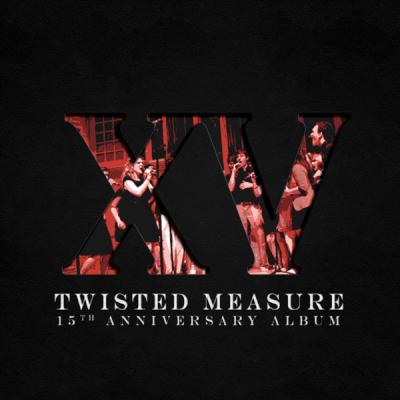 XV is a celebration of the fifteenth anniversary of Twisted Measure, a co-ed group at Elon University. It's a little unclear what the anniversary has to do with the album's track list: the album is not a compilation of recordings from the group's past, nor is it a collection of new recordings of arrangements from the group's historical arsenal. So don't be misled by the text "15th Anniversary Album" on the cover of XV: it appears that the album is just another Twisted Measure album that happened to have been released on the group's 15th anniversary.

Despite the confusing celebratory text, XV is a nice step forward from Twisted Measure's last release, And the Rest is Twistory. Who Did That to You? is the standout track here, thanks to its sultry arrangement (alum Jesse Palmer), stunning lead (Katie Middleton), and solid overall delivery from the group. Speaking of arrangements, Twisted Measure has a strong group of arrangers represented here. Several songs on XV feature lines from other songs woven in, a technique that's engaging for a listener, particularly since it's not overdone here. Overall, the songs that work the best here are those with the least busy arrangements: Gone, Something to Believe In, and the choruses of Leave My Body in particular.

There are a few things that could use improvement here, though. The balance between soloist and backs is totally off on I Choose You: the "doom-doom, doom-doom, doom-doom, doom-da-doom-doom" line does perfectly replicate the Sara Bareilles original, but the vocal version completely overwhelms the soloist. It's Time fares slightly better, but there are still some soloist/backs balance issues throughout the song.

Twisted Measure gives an unusual perspective by giving a male lead to ...Baby One More Time, but there isn't a broad enough range of dynamics to make the song truly pop. And the group really does come close — the final minute tries to deliver a forceful crescendo, but it doesn't start quiet enough or grow loud enough to be truly captivating, which is a shame. The arrangement builds beautifully, but that build isn't executed dramatically enough on this recording.

Most of my criticisms about XV lie more with the choices made during the recording: tempo (Walking On Broken Glass feels a hair too slow, and there are some awkward tempo changes in Let It Be), plus the aforementioned mix issues. It's unclear whether those choices were made by Twisted Measure or by its studio crew (Liquid 5th recorded, edited, mixed, and mastered XV), but to a listener, only the final product matters, not the decision-making process. Twisted Measure has a lot to be proud of on XV: strong soloists, strong arrangements, and solid pitch/blend — all of which are a marked improvement over the group's last recording. Those strong components weren't always captured compellingly in the recording process, but there are enough solid songs here to make XV an enjoyable listen, even beyond the group's friends and family.

There's purposeful motion, and there's pointless motion. Purposeful motion is a series of staccato attacks, legato phrases, and stark silences that propel a song forward with unique and engaging musical moments. It accentuates the main melody. Pointless motion, on the other hand, is a stream of riffs and rhythms that maintains momentum with complexity and constant stimulation. It mostly ignores the main melody. Twisted Measure tends toward a somewhat unwieldy sound, but XV has a handful of streamlined arrangements that make this album well worth checking out.

The arrangements that sound the best take barely any arranging at all; they are simply solo with accompaniment. They are the simple call and response of Gone, the gospel-esque harmonies of Let It Be, the articulate hits of I Choose You and Who Did That to You?. The backgrounds provide textural and tonal variation to give each of these songs direction without drawing attention away from the main melody. Most importantly: when they're not needed, they're not there. The silences give your ears time to appreciate the last phrase and keep them eagerly anticipating the next. Every syllable, every percussion hit, and every rest serves a specific purpose in these four arrangements, and it sounds wonderful.

As Twisted Measure adds more layers, individual notes and even whole sections lose their significance. ...Baby One More Time, though not the most tasteful choice, has the potential to be another minimalist, sassy track. Instead it gets bogged down with open vowel pads and awkward "jen jen-ah" hits. Otherwise, there are basically just too many syllables. We get jostled with lots of eighth notes doing little more than emphasizing chord changes in The Harold Song, The Scientist, Jenny, and Set Fire to the Rain. We get so much going on in Give Your Heart a Break and It's Time (including semi-forced mash-ups in both) that at times it's hard to even discern what rhythms the basses, tenors, and altos are singing. Complexity definitely keeps a song moving, but it doesn't always take the listener along for the ride.

Even though just four out of fifteen tracks move with purpose, overall this album definitely moves. The backgrounds are tight, the percussion is clean and effective, and the array of talented, perfectly casted soloists is truly amazing. The team from Liquid 5th Productions preserves the natural richness and brightness of Twisted Measure to achieve energy without annoying filters or overbearing compression. With so much good work across the board, the difference between what works and what doesn't boils down to the motion in the arrangements. There are both purposeful and pointless moments scattered throughout XV, with just enough of the former to keep you coming back for more.

Twisted Measure's XV, aptly named in honor of the group's 15th anniversary, is a collection of interesting ideas in a larger collection of "unexciting-ness". While there are some moments in the album that are really cool, most are overshadowed by bland and basic arrangements that simply transcribe the original song.

I immediately noticed that this group enjoys the gender bender, which is always fun. Unfortunately, this only works half the time. In It's Time and Who Did That to You?, the female vocals do not feel as strained as the original male vocals. In the male range, the notes are higher and a certain stress can be heard, whereas the female vocals in the same range seem too easy and the anguish is not there.

The high point of the album is definitely Let It Be. The arrangement is simple, with long, open vowels and harmonies backing up an absolutely stellar solo from Lizzy Bassen. You can hear the emotion while she wails; you just know that she feels what the song is about from a spiritual standpoint. The track, even with the most straightforward arrangement and least complex song on the album, has more energy than anything else here, and Bassen is a big part of that.

Speaking of solos, the soloists on XV are the album's strong point. From the meaty melody in Slumber, to the sass in ...Baby One More Time, to the soulful and sultry take on Gone, the soloists bring you into the track, keeping you at attention from start to finish. I continue to squeal with delight at the end of Walking On Broken Glass every time I hear Marit Nelson hit the whistle notes.

My piece of advice to the group: take more advantage of the recording space in the arrangement. Listening to the tracks again and again, I get the sense that I would hear a similar version in a live setting. Recording provides the opportunity to add more layers, creating a more complex and compelling arrangement and sound which will only help to boost the quality of the music. If Twisted Measure experiments with more complex arrangements, both the group and the listeners will benefit.

For a physical copy, email twistedmeasure@elon.edu.