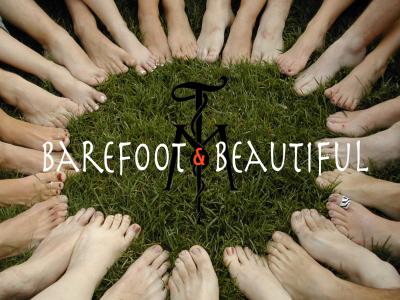 First, the basics for the uninitiated vis-a-vis Elon University (of which I was one until recently): it's a small, private university — fewer than 5,000 students including its small graduate program — founded in 1889 by the Christian Church (now the United Church of Christ). The school is named after its locale, the town of Elon, which can be found 30 minutes Northwest of Durham and Chapel Hill, and 20 minutes east of Greensboro.

"Aha!", you say, "another one of those North Carolina schools with a fearsome a cappella tradition". Well, not quite.

Founded in 1999, Twisted Measure is Elon's only co-ed a cappella group. Judging from their debut release "Barefoot and Beautiful", they're off to a good start but have a ways to go before they catch their better-known a cappella colleagues at the other Carolina colleges (sorry, a little alliteration happy, I know.)

First to the strengths, of which there are primarily four: Andrew Frace's percussion, Kara Falck's arrangements, the soloists, and the choice of syllables. Sadly, Frace's well-supported v.p. graces only two of the tracks on this CD, but those tracks are instantaneously superior to most of the rest of the album purely on the basis of his contribution. More than two-thirds of the arrangements are credited to either Brian Hecker or Kara Falck and, without wanting to significantly diminish the quality of Hecker's work, Falck's work is generally the more engaging and sophisticated of the two. The Dixie Chicks' Somedays You Gotta Dance and a well-constructed Hit ‘em Up Style were my two personal faves. As for soloists, in Cori Wetherald the group has a bona fide country music specialist who does a fabulous job with the aforementioned Dixie Chicks cover, and was really the only reason I liked SheDaisy's Mine all Mine. There are a few missteps now and again — Michelle Payne's voice is lovely but a bit too cutesy for the opening Heaven and Brian Hecker's solo on Zephyr Song felt like it was missing some "edge" — but for the most part, the matches between vocalist and material are pretty solid. Lastly, for a debut album, the group shows a surprising appreciation for mixing up the syllables, resulting in some interesting and effective combinations on virtually every song.

But there are the inevitable minuses, and I'm surprised at some of them, especially considering that Dave Sperandio takes a producer credit on the album. I don't know how intimately involved he was in the creation of the album or where along the way he became involved, but there are any number of places at which I found myself atypically wondering at how certain less-than-stellar performance and production issues made their way onto the finished product.

Most noticeably — and I feel as though I'm picking on Brian Hecker so Brian, I hope you will forgive me — the combination of Frace and Hecker on the opening track (Heaven) works so well that it is sorely missed throughout the rest of the album. Hecker takes solo percussion credit on five more tracks and Kara Falck takes solo percussion credit on two more but neither have a kick drum sound to speak of. Much of their v.p. work sounds circa 1992 and the resulting overall mix leaves the songs sounding thin. Which segues nicely into a comment about the production — it feels treble heavy. I played with the settings several times on my receiver to see if it perhaps was my system, but nothing I could do could fill out the sound significantly. Indeed, hearing the penultimate track, a very full, lush-sounding When You Come Back Down, I was then very disappointed that a similar palette had not been used for the rest of the album.

There are musical issues as well: the arrangements, though they employ well-chosen syllables, shade towards the monotonous, latching onto one riff and repeating it ad infinitum. There is little development or "build" to many of the arrangements. Perhaps because the arrangers haven't tried to move beyond their source material, the album is incredibly short, clocking in at a mere 35+ minutes for 10 songs. And, not so unexpectedly from a newer group (but perhaps more surprising from a group that may have had the benefit of ‘dio's studio expertise), there is a bit of pitchiness evident now and again. The biggest culprits are the altos in their moving lines, but the tenors are sometimes guilty as well, and the basses are occasional violators too (their intervals in Mine all Mine are weak).

All in all, an extremely promising first effort from a talented group of newcomers. Not a must-buy album by any means (I struggled with giving a high 3 or a low 4 for "tuning/blend" and for their overall mark, and ended up giving them the higher marks), but definitely a must-watch group.

There's really nothing overwhelming about Twisted Measure's latest album, save that it's overwhelmingly average. Soloists, arrangements, and production all fall squarely in the realm of "just okay", which is probably disappointing for this Elon University group that's received more than a few accolades for its live performances.

Opening the CD is the pop remix of Bryan Adams' Heaven, headed by soloist Michelle Payne, who, although she has a sweet voice, strains to reach top notes, can't reproduce the vocal turns of the DJ Sammy original, and falls flat of achieving a nice, full sound. I find the background achingly repetitive as well, with an exaggerated chord progression led by the basses, the altos steering the rhythmic movement of each measure.

Indeed, many of the songs on Barefoot & Beautiful are overbearingly lower voice-heavy and strain to achieve a blend. The resulting effect is a disjointed collection of singers backing up often inadequate soloists. In the country tune Mine all Mine, Cori Wetherald does have a nice timbre to her middle range, which sounds to be about 4 or 5 whole notes. At the refrain, she switches into head voice and the "mines" of the title are lost, understated against the background. Further, at the top of her chest voice, like Ms. Payne, she loses pitch. Somedays You Gotta Dance shows marked improvement; Ms. Wetherald is slightly less off the melody.

Despite the arrangements, which feature mainly parallel chord progressions and overbearing backgrounds that can drown the soloist, there are a few high points. Soloist Katie Howell shines on Strong Enough, a Wash. U. Mosaic Whispers favorite of mine that I thought I'd never hear bested, and Kara Falck does just fine on Hit 'Em Up Style. While the arrangements may not earn any awards, these clear, endearing solos are winners. Speaking of arrangements, Hear You Me has been making the rounds on collegiate albums, and this version offers no competition to some of those previously heard. With a dragging, utterly uninteresting background, Jason Smith's solo is unsupported. I was fine with Brian Hecker's percussion, featured on six of the ten tracks.

A typical college album if ever I heard one, which, again, is unfortunate as I've been told this album was a few years in the making. With a lack of energy, complexity, and enthusiasm as evidenced in the vocals and arrangements, Barefoot & Beautiful doesn't quite sit pretty on my shelf.

There's nothing twisted about Barefoot & Beautiful. And that's too bad. Twisted Measure has a pleasantly natural, choral sound. But when someone asks how I feel about the album, I find myself mumbling something like "Well, um, it's nice enough. I guess. Uh... yeah, nice. Sorta." I know that analysis isn't very creative or compelling or interesting. But neither is this recording. It could use a serious injection of character.

One thing these folk from Elon, NC do well is take any song style — rock, hip-hop, country, pop — and make it all sound the same, but not really in a good way. Most songs I found to be too slow — especially the first dirge version I've ever heard of Sheryl Crow's Strong Enough. Inappropriately choral backing vocals are everywhere (i.e., the Zither Carol intro and outro to In the End). Songs don't feature nearly enough dynamic diversity, textural change, rhythmic variation, or deviation from a middle of the road tessitura. Tracks blend together into one amorphous, blob-like ooze.

Arrangements are oppressively repetitive, which would be fine if the soloists kicked ass. But they don't. They sing all the right notes but really only function as nicely blending, unimaginative back-up singers who happen to have the melody and be placed up front in the mix. The single soloist standout is Ms. Kara Falck, who anchors a surprisingly credible Hit 'Em Up Style. Sometimes a solo is 90% of a song, and Ms. Falck puts forth a tastefully straightforward yet acrobatic example.

Percussion is adequate but doesn't really function in conjunction with the basses as a rhythm section — it's more an auxiliary time keeper than anything else. (And at least better than what appears to be an audible click track at the beginning of When You Come Back Down.) VP isn't over-produced and, in keeping with the overall choral sound, is also pleasantly natural on most songs.

Adequate tuning along with reasonably effective blend and ensemble are the strengths of this album. But it's not enough to overcome the blandness of being generic, somewhat nice, and not much more.