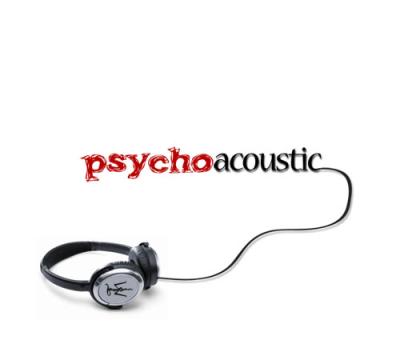 Elon Twisted Measure's most recent album, psychoacoustic, is above average in execution and production, but lackluster in musical impact. Using the title as guidance, if you thought this album should be a scientific study of the perception of music, go to the head of the class. If you thought that this album should be crazy non-electronically enhanced sound, raise your hand with me. psychoacoustic, however, is neither of these things.

There is nothing scientific about their approach, except perhaps a (conscious or sub-conscious) decision to put their better tracks earlier in the album, which slowly tapers off in quality in the later tracks. There is also nothing ground-breaking or unique about their arrangements or interpretations (which would be "crazy" in the collegiate world). Furthermore, the production is several steps away from acoustic.

So what is psychoacoustic?

psychoacoustic is a standard contemporary collegiate a cappella album, chock full of pop covers from the likes of Maroon 5, Black Eyed Peas, and Amy Winehouse. Is it in tune? Yes. It is well-produced? Yes. How are the arrangements? Pretty good, and the production complements the arrangements rather than masking them. Soloists? Fine, but they could have given a little bit more energy and grit to their performances.

Home, the album's opener, is a very strong track, and in fact, excited me with the tone and anticipation of the introduction. But once the soloist comes in, the song falters. He is very good, but doesn't quite capture the Southern rock mood of the song, and his singing gets a little shaky when the song demands more vocal gymnastics. Pump It had the most natural energy to my ear, and was the best track on the album.

For next time, Twisted Measure should focus on songs their soloists can comfortably and competently handle, and should also reconsider what makes it onto the final album. Listeners can do without Army's incessant, whiny solo and the odd karaoke frat boy sound of a guy with a voice the opposite of John Legend tackling Save Room.

In one way, Elon Twisted Measure's psychoacoustic is one step ahead of most collegiate a cappella albums. It has an engaging and surprising track list, featuring songs from Marc Broussard, Sara Bareilles, Rilo Kiley, The Wreckers, and Straylight Run. Refereshing as these choices may be, their inclusion isn't enough to elevate psychoacoustic above the status quo. The album offers an exceptional opener and closer, but everything in between is sadly average.

The average quality of most of the Twisted Measure soloists prevents psychoacoustic from rising above the pack. No voice offends, but few excel. Twisted Measure has strong arrangements (half of which come from the talented John Fiander) and the production offers expected, well-tuned, thick mixes. It's because of this that a song shines when the soloist is strong. With that final piece in place, Twisted Measure hits on all cylinders. Taylor Barr's rock vocals are effective on The Fray's All at Once. Zach Taylor, clearly the group's solo star, delivers a moving performance on Existentialism on Prom Night and an impressively rich baritone solo on Marc Broussard's Home. Home is the album's second strongest song, and a fantastic choice for an opener. The tone is ominous and intriguing, and the broken down bridge is fabulous, spotlighting Taylor's voice and the creative, bold use of percussion.

These clever textures are missing from several other songs, and the blocks are often disappointing. The women on Pump It are too saccharine. The Love on the Rocks solo seems separate from the block, a little too raw compared to the rest. Rehab is strange and unconvincing, saved from complete feebleness by its mix and a cheeky rap by Julian Powell. Backs are overtuned on Save Room. The thin One Way or Another suffers from ineffective syllables, and Blondie fans will be troubled by the credit to both the original group and Mandy Moore in the liner notes. There's no need for the Mandy credit, since her version adds nothing to the original. Neither does Twisted Measure's.

It's a credit to the beauty of Existentialism on Prom Night that many flaws are forgiven by the time this perfect closer comes to a close. This is a perfect track, and one of my favorite songs of the year. The emotion comes through in each voice, in each section. Twisted Measure is capable of something exceptional: an album full of material consistently this strong and emotionally aware would be unforgettable. It's a goal within reach for this talented group.

First point of business: psychoacoustic is a darn good name for an album. That is the name of the new album by Twisted Measure, Elon University's 17 member (judging from their website photos) coed a cappella group. The album has highs and lows, but unfortunately many of the tracks fall short of standard set by the album title.

The typical psychoacoustic song is too heavy on the bass and too loud on the drums. That makes many of the tracks unpleasant to listen to, at least to this reviewer. The good news is that this helps emphasize the jewels of the album where some beautiful music occurs. The bad news is that the best tracks might just feel good in the same way it feels really good when someone stops banging on your head with a hammer. Many of the tracks I rated highest — for example, Portions for Foxes, Breathe Me, Leave the Pieces, and Existentialism on Prom Night — had less bass and quieter drums (in addition to having good soloists and good backup parts), and it's an open question as to whether I have rated them higher than they deserve due to their contrast with the songs immediately preceding them.

To elaborate more on the drums: The whole album used the vocal percussion technique where a single drum sound was captured and likely edited digitally, then played back as e.g. the snare sound for the whole track. I rarely like this technique because it sounds too artificial to me. Yes, a drum done that way can sound more drum-like than unedited VP ... but the real drums on non-a cappella music don't sound the same on every single beat, so in a sense this technique is making the VP sound less drum-like. This type of artificial drum reminds me a bit of some '80s electronic dance music where the drums make the same sound for the whole song — except that music used digital drum effects in order to play fast and consistent tempos, not at all the same thing that the drums on this album were going for. But "your mileage may vary", as the saying goes, and I imagine some people do like this drum effect. At any rate, the artificiality was even stronger on Bright Lights than on the typical track, because the main slow snare drum did periodic fast patterns as well; that really seemed odd to me.

The review has been pretty negative so far, so let me include some of the best moments: I thought the male soloist on Existentialism on Prom Night and the female soloist on Leave the Pieces did bang-up jobs. Both of those pieces also have great duet singers as well. Also, a lot of the tracks have an interesting effect where a male singer has the solo, but a female part sings/hums along up an octave or two. I'm not sure I am a compete fan of that arranging technique, but it was interesting.

In conclusion, I heartily recommend some of the individual tracks, but unfortunately I can't really recommend the album as a whole.