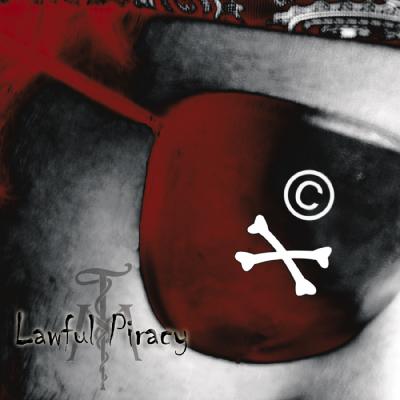 There was a time when RARB reviewers commented on each track individually. While the reasons for the abolishment of that procedure were no doubt well-founded, my feelings on Elon College Twisted Measure's latest CD Lawful Piracy seem best-suited to a temporary revisitation of that format.

You see, those Twisted Measures are very much in love with their aca-syllables — so much so, that in lieu of terribly sophisticated arrangements, the carefully-crafted syllabic aca-phrases, which open every song, became the defining aspect of each track for me. So without further ado:

Bottom Line: if you like the track list and are more interested in overall sound, buy the album. If you prefer craft and sophistication, then you still might enjoy but only as a guilty pleasure.

It's springtime in North Carolina. The purple buds are opening up on the trees, windows are rolled down, stereo's blasting, and I'm making my way to the a cappella mecca of ... the Piedmont Triad? You'd better believe it, folks. Diovoce, along with Liquid 5th, is raising the roof on collegiate albums and live performance, and Twisted Measure's latest studio release is no exception. Expertly crafted without a hint of that Off the Beat pretension of excellence I so despise, Lawful Piracy is a frenetic, creative work running the gamut from chick pop to indie light. More refined, more precise than Barefoot & Beautiful, this lively album from Twisted Measure and Diovoce legitimizes its song space on BOCA 2006.

To get the bad stuff out of the way, the male vocals don't fare nearly as well as the women do. Taylor Barr's lead on Seasons feels hollow and unsupported, slightly nasal and flat. The song itself doesn't rock as it should, either; the tempo feels a little off kilter as the song transitions from intro to the first verse. Like a bad pilot that NBC slides in between "Will and Grace" and "My Name is Earl", however, it's bookended nicely with the deep, brooding Kid Fears and the best Kelly Clarkson cover (by Jenny Freeman) I've heard this side of the American Idol herself. Similarly, Brian Hecker is a bit too concerned with enunciation to really back up the vocals of The Way it Changes until, that is, he delves into a 2pac rap that is aptly paired against the familiar refrain of the Bruce Hornsby song. And Cooper Campbell's baritone is harsh against the smart, punchy background of Carry On.

And onto the great: The female leads and the arrangements. Between Devils & Angels, Let Go (the newest songs to hit the overplayed a cappella charts), and even the bane of the early '90s What's Up?, the women clearly dominate the talent pool on solos. Nevertheless, Brian Hecker — whose nine and a half arrangements dominate the album — offers an admirable diversity of work. I'm particularly pleased with Bless the Broken Road, a respectable interpretation with Hecker himself on lead vocals.

The confined space of Barefoot & Beautiful has been replaced with a more comfortable range of expression that seems to have been set free by masterful production and a more polished execution. I challenge reviewer Elie Landau's mock comment from his last Twisted Measure review: "... another one of those North Carolina schools with a fearsome a cappella tradition". Just you wait. Give the men a few years to polish their vocal chops, and Elon's Twisted Measure will be a Carolina powerhouse not to be reckoned with.

Elon University's Twisted Measure is back for its second foray into the recorded a cappella world, playfully mocking so many with their album title, Lawful Piracy. At first listen, the album seems like an improvement over Barefoot & Beautiful, but a closer listen reveals that Dave Sperandio's magic production touch only masks the issues that could plague the group for albums to come.

The first problem is the lack of innovative arrangements. There isn't much creativity going on here; almost all of the songs are pure transcriptions of the originals. Twisted Measure could also benefit by mixing it up a bit. They use the same syllables over and over again. They seem to be stuck on anything starting with the letter "j"; jin, jeh, joh ... take your pick. The arrangers like to find something comfortable, and then repeat it over and over again throughout the song.

The second issue comes in the form of the soloists. It's not that they are bad singers, it's that they are not being themselves. The soloists should spend less time trying to imitate the original artist and more time cultivating their own sound and giving the songs some originality (Carry On, Desperately Wanting, What's Up? are good examples of this). All these soloists would have done a better job if they would have sung the songs their own way.

Also, the soloists have a difficult time grabbing the emotions of the songs. They are simply singing and not emoting. The one exception is Jason Eden. His lead vocal on If I Am grabs you from the very beginning with its sense of urgency and never lets go. I also enjoyed Leslie Price's sweetness on Let Go. Yet perhaps the most effective solo was the harmony put down by Jason Smith on Kid Fears. The track moves along nicely until about two-thirds of the way in when Smith appears. He adds a haunting element hovering over soloist Kaity Shaw and really kicks the song into gear.

Regardless of these issues, I enjoy Lawful Piracy when I take my reviewer hat off and magically turn back into an a cappella fan. Twisted Measure has the voices, the energy and the sound to make good albums, and this one is no exception. Now if they can just do less copying and incorporate more originality, they can create excellent albums.