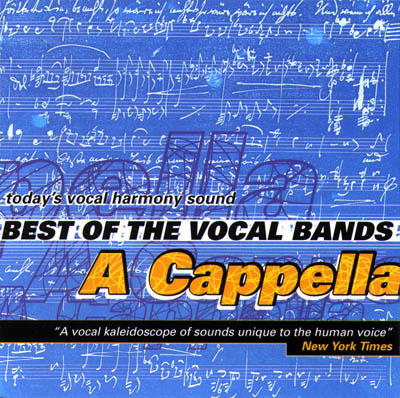 Well, here is an album that is hard to go wrong with. The Primarily A Cappella collection album called Best of Vocal Bands is everything you would expect: a collection of some of the most well-known a cappella groups (vocal bands, excuse me) put together on one album with some of the best tracks they have made to date. An a cappella head will never feel like they spent their money poorly when the album boasts the following artists: The Swingle Singers, SoVoSó, Vox One, m-pact, Five O'Clock Shadow, The Blenders, The House Jacks, Tonic Sol-Fa, The Nylons, The Bobs, The Flying Pickets, and Vocal Sampling. This is a list of the finest vocal bands out there today, and each track is a crystal-clear snippet of their respective talents.

There is not a single weak track on this album. I find it hard to list even best tracks here... but I have always been a fan of m-pact, and their amazing song Without Your Love. But then it is preceded by a stunning take of Herbie Hancock's Chameleon by the modern vocal jazz masters Vox One. I love that one. But then I love the slow groove of the grand masters of modern a cappella The Nylons as they power out the song Ain't No Sunshine. Wow. Then there is Vocal Sampling, and the way they do what they do... oh I drool over the last track La Fiesta Ya Empezo. It is great. But then, is there a song on this album that is not great in its own right? I think not.

The only real problem I can even think of with this album is the fact that it is mixed somewhat quiet. So I had to turn up my stereo a bit more than usual... boy, big problem there. If you can handle that, then you should just get out there and buy this album. There is lots to love, and you will be giving this collection some heavy rotation on your stereo.

Best of... is a good compilation album. In the nature of such albums, the quality varies from song to song (i.e., from group to group); thankfully Best of... lives up fairly well to its name, with most songs well worth hearing, some real stand-outs and only a couple lackluster pieces. It is also in the nature of compilations for the diverse contents to hold different appeal for different listeners; now would be a good time for that requisite grain of salt.

I like the general direction being taken by "vocal bands" these days: persistent percussion and rhythmically interesting lines made modern by slick studio work but still rooted in tight harmony. A lot of such work is represented on this album (although not as much as on Hot Lips, whose feel is distinctly more techno), making it a good introduction for the a cappella neophyte (or anyone poor, like me). m-pact's Without You is a good example (the source album, 2, is reviewed by RARB); FOCS's Stop and Say Hello is a bit too jingly.

But the buck doesn't stop there. More traditional groups are also represented, including the Swingle Singers, whose track is fun once, and The Bobs, whose percussion sounds strangely off.

All in all, this is a good sampler, showing off some of what makes contemporary a cappella a vital medium. While some of the tracks are less convincing than others, I think this a matter less of musicality than of personal taste. A good album.

(My one real complaint should deter no one from listening: the liner notes are simply out of control, too exuberant and trying much too hard. From "glorious listening" to "amazingly rich sonic tapestry" to "oohs and aahs of the harmonies" belying "the poignant melodrama of the lyrics" — easy there, killer!)

Along comes another compilation album that attempts to bring together the best tracks of twelve groups that will hopefully draw new fans over from the dark side (read as: instrumental accompaniment). So taken from that, this album should be quite successful in the "give it to a friend" category. It should also do quite well with people who enjoy those "Now That's What I Call Music" compilation type albums.

For those that are diehards, or who have regular shipments of a cappella, this may not be worth getting. I say that last part because many of the tracks are taken from EXTREMELY popular compact discs... m-pact, FOCS, The Blenders, The House Jacks to name a few. Perhaps it's the cynic in me that is getting tired of these compilations. I'm appreciative of hearing from those groups that are new to me, but there are just too many popular groups (odd as it is to say) whose CDs I own that I can grab from my book. That being said, I'll also venture that the CD wasn't made for me (and frankly that's probably a good thing).

So, as far as the music goes, where this is more or less a sampler to draw people in getting new CDs, all the tracks are excellent and extremely listenable, EXCEPT FOR The Flying Pickets' cover of No More I Love You's. Perhaps I'm just too keyed in to Annie Lennox's version, or the cover that was done by Stanford Mixed Company, because the shift in arrangement was too great for me. I kept feeling like I was trying to catch up with what my recollection of the song was in comparison to what they were singing.

John Neal's production is excellent as the track order is fluid, with no jarring out of place tracks along the way. It's a fun CD that should draw in new fans and keep those who just joined us happy.

This album is a lot of fun. The opener, a hilarious (but well-executed) rendition of the theme song from Mission Impossible, ensures that you don't take things too seriously from the start. The energy is infectious, production tight, and of course, it's great to have a sampler of most of a cappella's greatest contemporary vocal bands.

(It doesn't hurt that this is the first album I've reviewed in quite a few that didn't have over 20 tracks! Yeah!!)

Throughout the compilation, you're treated to various moments of pleasure; from Vox One's "electric guitar" solos and "trumpet" riffs to Tonic Sol-Fa's heartfelt doo-wop stylings. Although that's not to say there aren't moments of cheesiness: Five O'Clock Shadow's Stop and Say Hello (Nobody Does It Anymore) and The Blenders' Tasty, Tasty, Tasty come to mind. Perhaps it's not a coincidence that the two tracks are sequential. However silly the lyrics may be, however, the songs on this album are for the most part well-produced and well-performed. (There are some variations in production quality and style that may be a natural result of the artists' varying musical styles.)

On the other hand, I don't feel like A Change of Heart was the best representation of The Bobs — one of their signature comedic pieces perhaps would have better demonstrated their style to new fans.

In any case, this is a great compilation for the more mature a cappella fan who can appreciate the eclectic mix of musical genres.

The Best of the Vocal Bands is a compilation published by a company called Primarily A Cappella (this company sells many a cappella recordings and apparently just needed one more to peddle). I found this to be a difficult album to review. Am I reviewing the groups or am I reviewing the compilation itself? The groups, very good. The compilation, not so much.

All of the tracks on this album were performed very well but they are definitely not all my favorite tracks from these groups. For example, Five O'Clock Shadow has many tracks that surpass the quality of Stop and Say Hello (track #5). Some of these tracks are also a little old (The Blenders' track was released in 1993).

Some groups included in this compilation are not what I would consider to be "vocal bands". The Swingle Singers and SoVoSó don't really seem to follow the vocal band description found in the booklet (although SoVoSó is still one of the best groups I've heard).

It feels like this album was thrown together and used just as another product. One example of this haphazard compilational style: the name of the group Tonic Sol-Fa was misspelled in both the track listings and in the band description. (It was spelled "Tonic Sol-far".)