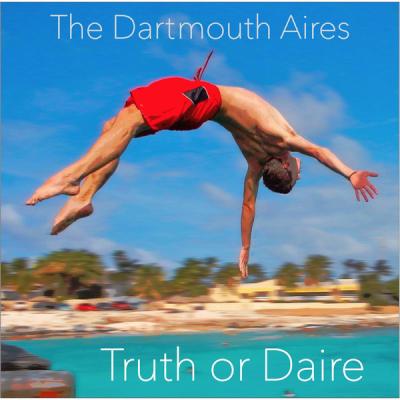 What to say about the Dartmouth Aires that hasn't been said numerous times before? If you like them, you are going to love Truth or Daire. But if they are just that group that was on that show with that one guy with the name, then this album is more of the same and you aren't going to care. I'm a big fan, but even I tire of some of the sameness that has permeated the past few albums.

Truth or Daire technically spans six years of singers, with members from the Classes of '11 through '17 represented on the album. That's a long time for continuity of sound and explains why much of that which plagued Fresh Aire is still present on this album. And it may be the reason why the back half of the album tracks — All of Me, Dark Horse, Sweet Disposition, Haunted and Mirrors  — sound like they belong on a completely different album.

And that's the issue that I have with this particular recording. Half of the tracks are in this joking "Hey, listen to us, we the funnest group you've ever heard singing" style. Almost as if the "entertainment" of the group is more important than the musicality. The jokes and schtick carry the weight of the album. (And that's saying a lot coming from a pro-performance guy). See both Wrecking Ball and Lady Is a Tramp; neither of these songs would be missed if it wasn't on the album. Though I thoroughly applaud the inclusion of Mayer Hawthorne's Just Ain't Gonna Work Out — that is some beautiful zaniness right there. Pixo's delivery is so spot on Mayer, I thought for a second the guys were featuring him as a guest artist on the track. Whereas, other tracks are so superbly sung that they leave me in a stupor (see the aforementioned tracks in the previous paragraph, plus Lost in the World from the Kanye Medley).

But it must be said that even subpar Aires tracks can be a pleasure to listen to. You aren't going to find many intonation or other musicality issues on the album. There is a depth of range from both a singing ability as well as emotional exploration. The non-affected singing is some of the best in the country. These guys can wail. A lot of the arrangements are borderline brilliant.

For more than a decade the Aires have been the total package. Sometimes what they are delivering just isn't to everyone's taste.  If you are still sipping on their Kool-Aid, this is the album (or two as the case may be) for you. It's got the fratty/funny tracks that will appease the juvenile in you, plus the drop-dead seriously super tracks for those of us a bit more matured.

Truth or Daire does what you would expect a collegiate album to do. It covers the hottest singles and artists of the day with a steady supply of resonant harmony and youthful charisma, punctuated with some ironic choices and clever twists. For an album by the Dartmouth Aires, I was hoping for something a little more unexpected.

In 2011 the Dartmouth Aires were the guys to be. This was the group that wowed us for eleven weeks on NBC's The Sing Off and finished second only to the Pentatonix. Truth or Daire is the legacy album of some of the very superstars that graced prime time TV, along with the select few recruited in the years that followed.

What happened?! What happened to the swooping dynamics, the theatrical climaxes, and the infectious sense of humor? What happened to the unexpected?! The only track that achieves that aura of greatness is the Kanye Medley. It is probably not a coincidence that the most impassioned performance on the album is led by the designated frontman for the Aires during The Sing Off: Michael "Nemo" Odokara-Okigbo. Even so, the transitions between parts of the medley sound forced (or poorly edited), and the mix often sacrifices balance for volume. It's awesome, but not a home run.

Two other songs take top marks for being awesome in their own ways. Levels is the a cappella embodiment of dance. While most of the album is driven by the solo lyrics, levels taps into the mesmerizing ambiance of rhythm. On the other end of the spectrum, Lady Is a Tramp is a trip into quintessential a cappella antics. The men play out the duet between Tony Bennett and Lady Gaga with just the right trio of comedic nonchalance and professional attention to detail (note: this song was written by Lorenz Hart and composed by Richard Rodgers, not Bennett and Gaga). Neither of these tracks is particularly out of the ordinary, but they show what the Aires can do to predictable melodies with sheer talent and enthusiasm.

Then there's the rest. Most of the arrangements have repetitive chord changes with minimal variation in intensity. It's all emphatic and cheery, all the time. The tone turns slightly sinister with some cooler moments in Wrecking Ball, Dark Horse, and Haunted, but the soloists play it too safe to make convincing, memorable recordings. Carry On is the requisite classic rock throwback, and it is infused with too much pop to do justice to the intimate harmonies of Crosby, Stills, and Nash. It's a lot of standard pop fare that sounds exactly how you would expect it to sound.

The Dartmouth Aires were fun to watch on The Sing Off because they did so many things you had never heard before, and did them so incredibly well. Truth or Daire does so many things you have heard, and does them just slightly above so-so. Don't give listeners the clean, calculated versions just because you can nitpick in the studio. We expect that. Give us all the dancing, the antics, and the aura of really letting it all out. That's the unexpected that we love to hear.

The album actually begins with an unremarkable take on Fool For You by CeeLo Green ft. Philip Bailey. The juxtaposition between this opening track and the track that follows, Levels by Avicii, is easily welcomed. The combination of Ethan "Merlo" Weinberg's arrangement and solo performance earned the Aires a spot on the 2015 Voices Only compilation album. A thoughtful but rushed medley of Kanye West favorites helps to keep the interest moving forward through the first half of the album.

I'm typically not a fan of tracklists that pander to some of the more over-played songs of recent years, but Truth or Daire is a rare exception. Tracks like Wrecking Ball, Mirrors, All of Me, and Dark Horse are actually among some of my favorites on the album. The Aires' adaption of Miley Cyrus' Wrecking Ball features a powerful, textured solo performance by Xavier "Dymo" Curry (who also arranged this track!). Mirrors and Dark Horse allow the Aires to cut loose and play with some fun syllable choices. The combination of Max "Romo" Gottschall and Nikhil "Djenko" Arora's arrangement with Nate "Zippo" Davis' solo performance make All of Me one of the most emotional tracks on the album, earning the Aires a spot on the 2015 Best Of College A Cappella compilation album.

Truth or Daire is right up there with some of my favorite male collegiate albums. If you don't already own this album, you should absolutely purchase it. I "Daire" you!