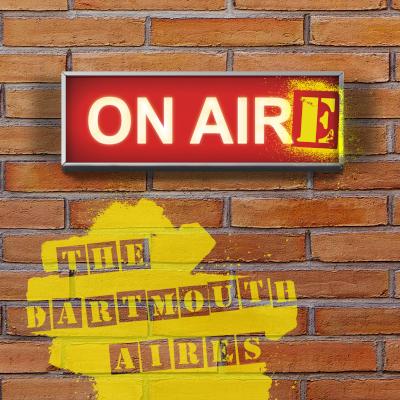 Well this certainly wasn't what I was expecting upon receipt of the latest recording by the Dartmouth Aires. Always a perennial party band, On Aire seems like there is a total disconnect between having fun while singing and maintaining a good sense of musicality. Instead of giving a wider audience what could have turned out to be the hot drop of the summer, it comes across as first year hallmates getting bogged down in finals and missing the caravan to beach week — an unabashed yearbook album for the staunchest of fans.

I can't pinpoint any one thing wrong with the album. It's all just so average for lack of a better descriptor. Not really bland, because the singers do occasionally take risks that are entertaining, but also nothing that excites the senses. And that's a terrible shame for a group that has been producing some of the most innovative (if inconsistent) music in the collegiate realm for the past two decades.

It's not really the fault of the soloists. Most of them sing their leads fairly capably. Olafur "Vigo" Olafsson, on Wayfaring Stranger, has the most flexibility in his voice. This gives the song a bit of grit in the bridge in contrast to the delicate nature of his verses (one of those aforementioned risky moments). Conor "Axo" Regan on Death of a Bachelor has the most bombast and energy, occasionally going full throttle on this most theatrical of songs. And Nikhil "Djenko" Arora on I Won't Give Up is just beautiful.

The production and arrangements on the album aren't bad ... but they don't complement each other at all. There is a lot of empty space in the arrangements for this large of a group. The use of backing lyrics gets a bit tiresome and samey. Even though there are arrangers credited in the liner notes, it's almost like the group deliberately pulled arrangements from the '90s to perform considering the lack of complexity on display.

Interestingly enough, On Aire closes with the most innovative and intriguing song of the entire tracklist. Back to Me is a pleasing listen — intricate and lots of fun. It's the one song that I had on repeat that didn't cause any cringes. Maybe the group decided to close the album with Back to Me as a treat for everyone who made it through the rest of the album. I dunno, but thanks?

As RARB reviewers have stated in the past, there's nothing wrong with producing a yearbook album. No one can be innovators and extraordinary at every turn. The Aires have an album that's just generic enough to be enjoyable for the casual fan, but I think audiences are ready to hear the other end of the spectrum.

Taking a look at On Aire's tracklist left me curious about what I might discover after listening. I wouldn't have thought to pair Marvin Gaye, Destiny's Child, Panic! at the Disco, and Shawn Mendes covers together, but I can appreciate the Dartmouth Aires venturing for inspiration from different sonic landscapes. What I ultimately found after listening to On Aire, though, was an album that certainly has its fair share of bright moments but is very much a "slow burner".

Opening with a Marvin medley is a bold choice, but the execution just doesn't quite do it for me. The arrangement itself is nice, and the selections are of course classics, but the track seems too much like a musical exercise than a true homage. Everything sounds well blended and in tune, but I didn't really get any sense of the soul, or tenderness in the vocals. The show tune/glee club style takes away from the song and leaves everything a bit plastic sounding. The next few songs —  Drop the Game, Over and Over Again, and Stitches — have a similar effect. These sound fine but there is sort of a squeaky cleanness to the delivery that makes the songs feel very static. Stitches in particular could have benefited from a little bit more bounce. Everything is in time, it is just too perfectly square and safe.

Here is one of my favorite arrangements on the album. The moodier darkness is a nice switch up from some of the brightness of the other songs, and I like how the dynamics sort of quietly nurse the song's steady subtle growth up until the electronic-like breakdown and climax around 2:40.

The Destiny's Child Medley is really well done. The selections for the medley are spot on, and the transitions are virtually seamless. Unlike the Marvin Gaye Medley, the Aires sound much more engaged in the genre and expressive with their musicality. They do a really nice job of preserving the bounce and the energy in their translation to voices, especially during Say My Name. Thumbs up.

In all, I enjoyed listening to On Aire. It's well-produced and the group's overall blend is highly commendable. There's no disputing the group's talent or knack for interesting arrangements (like Here and Back to Me). This being said, the album in its entirety is very much like a tale of two halves, the first being just a bit underwhelming in comparison to the second. For this reason, I don't feel comfortable giving it a "4". My recommendations include Destiny's Child Medley, Here, I Won't Give Up, and Back to Me.

The Dartmouth Aires may still be a household name for their appearance on Season 3 of NBC's The Sing-Off. The group that recorded On Aire is patently different since the show was somehow already six years ago, but the Aires still have a knack for fun tunes. Though it is teeming with untapped potential, On Aire is an enjoyable, aurally palatable yearbook album.

Throughout the album, I clamor for something outside of a metronomic four-pattern, or some considerable dynamics. The arrangements, across the board, seem to try to shoe-horn lyrics into the background, but it feels forced in nearly every instance. Yet I am often pleasantly surprised with chord choices: the Aires utilize more than basic triads and 7th chords, setting them above other collegiate groups.

Like the album itself, individual tracks often contain moments of brilliance that are overshadowed by a glaring need or inconsistency elsewhere. For example, from an arrangement standpoint, Death of a Bachelor is one of the best a cappella covers I've heard of the Panic! at the Disco song with its insistence on jazzy color tones and percussion to match, but the high notes of the soloist are exposed in the mix in a less-than-flattering manner. The medleys are fun and energetic but the songs are mostly packed in without transition and there are a lot of instances of the aforementioned shoe-horned background lyrics. Stitches is not in a particularly difficult range, so while it's performed just fine, it leaves something to be desired where energy and interpretation are concerned.

Here, Wayfaring Stranger, and Back to Me are curious cases because they're quite good, but with a bit more TLC, could be excellent. The words in the introduction to Here could build into something pivotal tonally or create a more complex texture, but they just scrape the surface. Wayfaring Stranger varies texture and has some discernable dynamic contrast but could employ some more dissonances to enhance its impact. The solo work on Back to Me is solid, but with trends in recorded a cappella, it feels like something that could have benefitted from more studio effects a la the original, because it seems as though something is missing in the refrain.

The true gems of the album come toward the end: Bad is not only catchy and upbeat, but the arrangement sounds particularly full and Noah Drazen delivers a solid solo. I Won't Give Up, while a fairly straightforward interpretation, is executed with aplomb.

As a note, the back of the CD cover is not clear where track numbers are concerned. They are listed in the liner notes, but not the back of the CD, and for cars that still have a CD player, for example, this is a bit problematic and seems like an odd omission.

On the plus side, in my multiple listens, the album has flown by each time. Repeat listenability is a definite plus: the consistent consonance of each track makes for perfect background music. Check out On Aire while you settle into a coffee shop or at your desk to get some work done and you will not be disappointed.