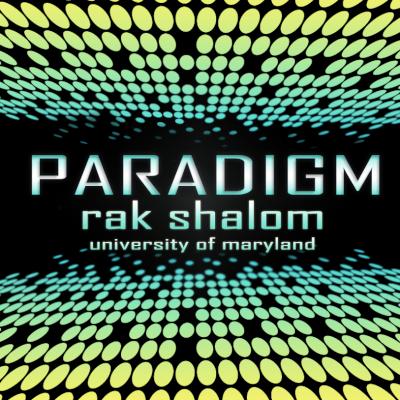 Rak Shalom, a Jewish a cappella group at University of Maryland, has come a long way since RARB started reviewing their albums. Unfortunately, with Paradigm, the group has regressed a bit, taking away some of the strides forward the group had achieved with its previous release, On Air.

Don't read that the wrong way, though: Paradigm still sounds pleasant. The group blends well, the songs sound pretty, and overall, it's nice to listen to. But there's nothing really remarkable here, and one of the biggest issues that permeates the album is that the songs sound a lot alike. Paradigm is one mid-tempo, mid-volume song after another. Without any strong dynamics to help tell the stories here, they all start to blur together. Below My Feet sounds pretty, but it never really goes anywhere, and I really, really wanted to hear some booming crescendos on I Feel Better, but it just feels like the group was holding back.

The sense of sameness is tough for the English-language songs where we have some familiarity with what the song could or should sound like, but it's the kiss of death for the Jewish songs. Without any change in volume or tone, it's hard to get any sense of story or meaning from the songs at all; I wanted the group to convey a beautiful climax on Kadima Hala but the song just sounds bland — and that was one of the better offerings here. The mouth trumpets on Im Ba Lecha sound great, but they are muffled: I want that brassy breakdown to come out like a solo, the way a horn player in a traditional band would step forward and take the spotlight during an instrumental break. Other songs just drag; Keilu Kan isn't served well with long sustained backs, and the medley Gam / Va'anachnu just feels sloppy. When all of this is coupled with a few poor editing choices — the "1 — 2 — 3 — 4" count-in on Kaleidoscope Heart is really distracting, for example — Paradigm feels like a step backwards.

There are two shining moments on this release, though. The original song The Wall showcases a swaying sound that songwriter/soloist Charlotte McCafferty really nails. But more impressive is the Summertime / Madness mash-up, where Rak Shalom fuses the two songs so inseparably that they sound as though they've always been together like this. I still wish for more dynamics (and a better credit in the liner notes — Summertime is listed as OPB Butterscotch, not the Gershwins), but this track shows off some real creativity and sounds exclusively Rak Shalom.

While Paradigm is a pleasant listen, what disappoints me most is the way in which the group has fallen short. On previous albums, the Israeli pop songs or traditional Jewish tunes were the highlight of the album. The group has lost that sense of identity here and instead sounds like any other contemporary college group, with a few Jewish tunes mixed in for good measure. It may not have been a conscious shift away from the group's mission, but Paradigm suffers as a result.

In modern vernacular, a "paradigm" is considered a current example or model to base others off of. Since the liner notes state that this album is "the paradigm of Jewish A Cappella music", Rak Shalom has already set themselves on two differing pedestals, neither of which is ideal to be standing on. The first is that this album is declared as the best of the best, and what every album should strive to be. The other is that this is the bare minimum to be considered passable. Before even listening to the first note, it's hard to tell if this co-ed group from the University of Maryland is already claiming that they are the best, or average at best. Fortunately (and unfortunately, depending on the perspective of the statement) for Rak Shalom, this album is both. Paradigm is a fusion of strong production value and mostly mediocre presentation.

One of the first things that sticks out is the production value. The overall timbre of the sound is brighter than what seems to be the norm. The production mix is also different. The standard mix is visually similar to a pyramid, where the volumes of the individual parts are greater in the lower vocal registers. This allows the higher voices to be supported by a strong foundation while they are still more naturally audibly piercing, resulting in a good balance. The visual of Paradigm feels more similar to the shape of a glass soda bottle, where the voices are still somewhat stronger on the bottom, but overall the voices are at more similar volumes. The lower registers are less supporting, taking the focus off of them and putting it on the inner voices and their harmonies. Overall, this works out well for Rak Shalom. Song like Compass — which features a vocal part that mimics a country banjo — are able to showcase voices that would almost fade into the background by a more standard mix. Conversely, with Summertime / Madness, this balance creates problems as the song is driven by higher voices and the bass is treated more as an auxiliary voice part. This is problematic, as the bass is often used as a source of truth for both pitch and rhythm. When songs that were both based originally around the bass part use bass more as an auxiliary, the impact of the song is lost. The backgrounds feel like a rushing conglomeration of rhythms rather than the driving beat that they should be. The production value does well to salvage the track, but it is hard to fully recover from losing the heart of the song.

While there's a lot to love about this album, there's something preventing the higher score. There is nothing about the album that demands attention. For the thirteen tracks on this album and the dozens of musical ideas they're composed of, there is very little that is earth-shattering. Most tracks give a solid presentation, and a few really utilize the strengths of the group, but there is nothing that is really worth writing home about. The album feels more like a collection of very loyal covers. There are few color notes, and no major musical ideas that hint at the arrangements being more than a transcription, with the exception of mashups. However, there is one song that doesn't follow suit. The Wall is an original, written by Charlotte McCafferty. There's so much to love about this track. The juxtaposition of the rhythmic parts and the soft underlying chords gives a really cool ambience for the soloist (also McCafferty) to just shimmer over the top. The addition of the harmonies on the solo also works to create the illusion of a duet of two people singing on opposite sides of a wall between them. It's a story told in a song, and Rak Shalom does a very good job of sharing it.

Overall, there's a lot of promise, but Rak Shalom needs to work to be a bit more daring. The presentation is solid, but the group needs to go past what already exists. If one of the best things about a cappella music is that it is only limited by the imagination, then it is up to the group to try imagining a little farther. Is Paradigm the standard to strive for? In short, no. Could it be? With a little imagination, the sky is the limit for Rak Shalom.

Rak Shalom's Paradigm is produced by the talented John Clark. There are only twelve members in the group, but the big sound effect can't be ignored here. The overall production, mixing, and mastering perfectly compensates the main vocals. This group is really good in mashing up songs and making them their own. Also, an original song on an album is a good sign that a group is indeed interested in exploring its talents, not to mention that almost all of the members have contributed to arranging this music as well.

Straight off favorites are Kadima Hala, Ghost, Keilu Kan, and Summertime / Madness, but this doesn't mean the rest of the tracks aren't as good. In fact, even though Summertime / Madness's "ma-ma-ma-ma-ma" starts off a bit sharp in the beginning, the overall track doesn't bother me at all. Each arrangement style is clever and surprisingly simple. The big choir sound in Below My Feet is a great studio trick that makes this song with repetitive chord patterns feel like an Enya track starting at 3:15. I didn't know Rihana's We All Want Love could actually fit with the liturgical song Shalom Rav, but Rak Shalom does it like simple pieces of a perfectly-shaped puzzle readily made for each other.

It's not until Keilu Kan that I feel like I'm actually listening to a Jewish a cappella album. Noah Bar-Shain shows us that he's not just limited to directing the group and arranging this track; this guy can sing. The first few tracks before that sound either Latin in Im Ba Lecha, contemporary Christian in Kadima Hala, or country in Compass.

Lastly, the hymn-like Kaleidoscope Heart (Live) doesn't sound live. But I love it when the bass randomly anchors some ending chords as well as my personal favorite C# insertion in the ending BMajor chord.

Rak Shalom's Paradigm could be categorized as a lite version of a Jewish a cappella album which only contains four and a half Israeli tracks. I truly admire the overall production and mixing. If there is one thing I'd like to hear more, it would be risk-taking soloists. Most of the soloists in this album seem to play it safe. Other than that, it looks like Paradigm will stay in my playlist for quite some time.