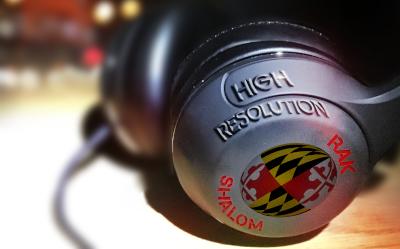 As a term best known to me from visual media, High Resolution struck me as an odd choice to name Rak Shalom's latest release, but I went with it nevertheless in the hopes that some thematic or stylistic choice would make the reasoning self-evident. And I suppose, to the extent that something rendered in high resolution is clear and vivid, this effort from one of the University of Maryland's Jewish a cappella groups lives up to its name. Regrettably however, what's being presented isn't overly compelling or entertaining.

Don't misunderstand: there's nothing profoundly wrong with High Resolution if you understand and accept that the group shows a dogged dedication to formulaic arrangements featuring a heavy, constant, big choral background sound, supplemented by bass and enhanced vocal percussion courtesy of the group's studio production team.

But with a commendably diverse repertoire that "spans from American and Israeli pop to traditional Jewish melodies" (courtesy of the CD liner notes, though none of the latter are really featured on this particular CD), this sameness of approach is a tremendous liability and makes it quite difficult to enjoy this album as a whole in a single sitting. There are a few selections that, taken individually, might prove diverting — the opening Watch Me Rise and Something to Believe In come to mind (and are reflected in my scores) — but the relentlessness with which the group's arrangers feel the need to fill almost every available second with anchoring chords, the disregard they often seem to have for the feel and flavor of the original material, and the absence of any truly meaningful dynamic variation conjured by the music director, translates into a predictability and monotony that robs the song choices of their individuality and instead mushes them all together as something of an indistinguishable musical blur.

To go song by song would be overkill, but listen to the energy and spirit of Sarit Haddad's Mimi and explain to me the straight-ahead rock beat that permeates its verses, and the extended legato backing vocals that betray the percussive, tof-centric, ethnic feel of the original. Say So / Forever is a nifty mash-up in concept, but both originals are crisp and funky in their horn and Hammond organ-infused background rhythms, yet none of that is preserved or highlighted in the cover offered here, almost as if the group is afraid to have a moment where there isn't a full, establishing chord present at every moment. Throughout the album, even in the rare moments where the group's arrangements do zero-in on a bit more rhythm in the backing vocals and allow for a bit of space and air — Something to Believe in is one example — the backing lines seem to be sung melodically/lyrically rather than percussively/rhythmically. This is especially aggravating because the group often favors syllable choices of the Off The Beat circa 1996 variety, yet fails to use the novelty/uniqueness of those syllables and the attacks of the consonants that begin them to full effect. As for dynamics, I almost don't know where to begin but the group's baseline setting seems to be "mezzo forte" and things basically only get louder from there. It's fine for the more energetic repertoire, but it's totally at odds with songs that begin in a more tender, atmospheric place like Young and Beautiful and Hakol Over.

I realize it may not sound like it, but having sung Jewish a cappella myself even before it became as popular as it has become on college campuses — especially (but not exclusively) in the Northeast and points slightly south (PA, MD, DC) — I really do root for groups like Rak Shalom. And the group's win at last year's Kol HaOlam (a collegiate Jewish a cappella competition) besting groups from Northwestern, Penn, Princeton, and Mezumenet (another Maryland group), is no small feat. But in the larger landscape of collegiate a cappella, these singers need to make a "high resolution" to up their arranging game big time, and add greater attention to dynamic and interpretive detail if they really want to be count themselves among the upper tier of collegiate ensembles.

The University of Maryland's Rak Shalom presents a variety of songs in both English and Hebrew on its latest release, High Resolution. If the album is true to its namesake, High Resolution shows a clear picture; unfortunately, that picture illuminates the group's weaknesses more than its strengths.

Perhaps the most noticeable weakness is that of the backup vocals, namely those on text. Anything sung on text has the added bonus of having a word whose emotion or meaning can be conveyed, but this bonus is also a responsibility. In the case of songs like Hallelujah, Something to Believe in, and Hakol Over / Preacher, the singers backing up the soloist read as anemic or obligatory, which makes even consonant, pleasant-sounding songs sound uninspired. Similarly, much of the background singing feels choppy; that is, the singers seem to pay more attention to individual moments rather than phrases, which makes music sound mechanical rather than lush or flowing. This is evident in the introduction to Watch Me Rise, where the eighth notes are sung so dynamically stagnant that there is no discernible direction.

There are many moments that are hindered by arranging choices, such as syllables not serving the moments they intend to in the most effective way. For example, the introduction in Od Yishama falls short of the strong opening intended partly because the "doh" syllables lack the kind of explosion necessary to match the percussion. The bright sounds and lightness of text don't serve the overall message of Young and Beautiful well: while the voice leading is technically correct, many background passages don't serve a purpose in the overall structure of the song and feel haphazard. Generally, the studio work on this album is sound, but in multiple songs, the higher-voiced parts seem to jump out of the texture, which could equally be an arranging issue.

That said, there are some lovely moments on this album. The infectious energy in Say So / Forever is something the group should capture and bring to all of its uptempo tunes in the future. After the introduction, Watch Me Rise settles into an attractive groove with a background to match the solo and percussion lines. The bridge to the end of Olam Chesed contains some of the best-arranged material on the entire album with dissonances to color the chords, staggered entrances to add rhythmic and textural interest, and more intensity.

There is great potential embedded in High Resolution and I hope that Rak Shalom will endeavor more attention to the big picture in order to access it.

When last we heard from Rak Shalom, I described the album (2016's Paradigm) as passing on a cursory glance, but there was little past the surface. High Resolution presents more of the same. Any fusion group brings about the same curiosity for me. Is the usage of multiple languages an addition to the overall presentation, or is it just a facet that the group utilizes?

There are two categories that all tracks fall into on this album. The first is mashups and medleys. These types of songs are one of my biggest pet peeves in a cappella due to their simplistic nature. Consider Hakol Over / Preacher. Most of the background is simple block chords. It's not stimulating as a backing, and puts a large amount of focus on the solos. The soloists sound great across the board, but they wind up unnecessarily isolated relative to the other members. Even worse, the mixing of other songs has the tendency to feel forced. For half the album, it almost seems like Rak Shalom is following in the footsteps of many other fusion groups, combining songs almost as a requirement rather than a choice.

This brings us to the other grouping of tracks, those that are standalone songs. These songs all have a much deeper complexity and work better as a cohesive unit. Consider one of my favorite tracks on the album, Mimi. Noah Bar-Shain rockets immediately into a hard-hitting vocal percussion groove before adding all the parts. When Daniela Nagar comes in with her solo, I'm hooked. This track is driving, almost manic with everything occurring simultaneously, and incredibly powerful. Bar-Shain penned a great arrangement and it really makes me wish that more of the album followed this style.

With the clear difference between the two track categories and ratings that mirror these thoughts, it poses a question I normally have for fusion groups: is the fusion always necessary? Does the addition of another song push both forward or hold them both back? Is adding another song meant to add effect, or is it simply to show off that the group can sing in two languages? For now, the answer feels to me like the fusion isn't highlighting the group as well as it could. Not to say that all the mashups and medleys are taboo, but more like each song in the track could do more to help the other beyond offering lyrics. It's within the reach of Rak Shalom, but it's not there yet.