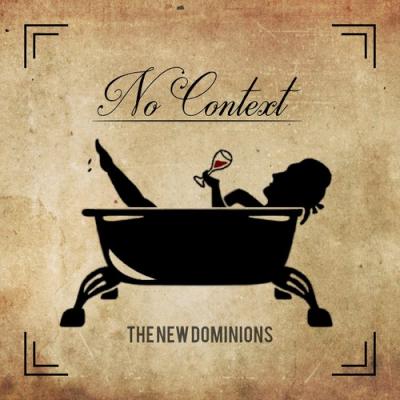 No Context is the 2016 entry for the New Dominions and it's pretty clear that there were no intentions of picking up where 2014's 23 Degrees left off. While 23 Degrees often suffered from an intermittent tapering of intensity, No Context regularly seeks to command the listener's attention.

One of the key drivers for this album from start to finish is the consistency in the solo performances. It is hard not to notice and appreciate the confidence with which all the leads sing. While this can be a significant hurdle to clear, the ability to sing it like you wrote it is a key differentiator for covers. This is especially important when you consider the likelihood of most listeners using the original as the measuring stick. Let It All Go is a personal favorite in this regard. The two soloists' deliveries communicate vulnerability and sensitivity, as well as great strength as the track progresses. There's an excellent balance of volume with the rest of the music and the timbres of the two leads complement each other eerily well.

Arrangement-wise there isn't anything you haven't heard before on No Context. Instead, what helps the the New Dominions excel is selection, focused dynamics, and great pacing in the tracklist in transitioning between various moods and styles. In its entirety, No Context is a step in the right direction from its predecessor. With strong soloist performances, steady pacing, and a well-chosen track list, No Context is an easy recommendation. It's a project that won't reinvent the wheel, but will please the ear nontheless. My personal highlights include Surrender, Let It All Go, Holding Onto Heaven, and Who You Are.

This is my third album review for the New Dominions, and I have the same thing to say that I usually do: they've buffed up their musical skills a bit, but there's still something missing. Since Porch Time and 23 Degrees, the group has picked up some more talented singers and polished their old hat members up to a new level. The technical skill here is undeniable — Kerry Johnson returns, showcasing some solid chops particularly, but the product overall demonstrates a well understood foundation of how to sing well. The syllables are clear, the tone is even, the cut-offs are together and the vibrato is controlled; it's all the technical demands you make of a group that's going into record. It sounds like pop radio, and I do love me some pop radio.

There are more soloists who stand out: Jenn Arcilla shows off her vocal skill on Who You Are, with some excellent support for her highest pitches. Graham Rebhun has the best solo of the album on Greek Tragedy, with hints of the kind of inflection I hope to see from a next level product.

But yet again, the energy feels forced. Each song, once it starts, just plows away. There isn't time for focused inflection, or lifts or breaks to give the audience a chance to stay with the story, just more showy singing. I've struggled so hard to figure out what is going on with these tracks that just don't sell the material to me, and this is the best metaphor I can come up with: no one is driving the bus. Everyone is onboard, going the same way, and they are all extremely enthusiastic and happy to be doing what they are doing. This group wants to be so good, and good means riffs and high notes and belting and new chords.

And the New Dominions have been making strides, but the glaring reality is there: I'm missing that sense of meaning. It doesn't seem like there's a mind shaping the product with intention, no reason for picking songs other than "This sounds good," or "People would love to hear this song." Pop radio might be what some people are looking for, but why should people listen to a cappella if the radio is already playing the exact same thing? Cool chords and technical displays of ability are only part of the battle. Despite crisp and snappy production, the tracks themselves lack warmth.

On a positive note (and a definite sign of growth), there are no below-average tracks on this album. I'd recommend the New Dominions take more time between albums to really dig into each of their songs; right now, the roughly "one a year" pace they've been running doesn't turn out much innovation, and I know that a group like this can bring so much more to the table.

No Context is a perfectly fitting name for the latest release from the New Dominions. Often, many of the top groups who don't venture into original songwrting aren't just known for their performances, they are known for the style of their covers. The arrangements are amazing in the context of the group and in the mind of the arrangers that have shaped the group over the past few years. Therefore, most of the songs you hear by these groups might be on the radio, but the sound is so different that the group's cover can almost be treated as a separate song rather than a transcription.

So, why is No Context a great name? Because in truth, this album strikes me as incredibly unimagined. All eleven songs on this album hang very closely to the originals' recordings. The closest exception to this is Surrender, which slightly hints at the song Untouchable (another song by the original artist). Moreover, the style is nothing new, as most chords are fairly basic, and the sounds recorded have been on albums produced at least ten years ago. I maintain that my favorite thing about the entirety of the a cappella genre is that the only thing that limits performers is the limit of their imagination. In many ways, it feels like the collective of the New Dominions is stuck in the transcriptions, unable to think past what the original artists wrote for more than a few seconds at a time. They're also stuck in the way you make sound, as there is no playfulness in the way these chords sound or the sounds are produced. It is such a lost opportunity, because there are some tremendous performers in the group, and that skill goes beyond just the soloists. There are occasional fluctuations in energy and group dynamic, but there are no major blemishes in the sound of the album. There's just minimal imagination.

But here's the problem I have with my own critique: these are some of the best transcribed arrangements I've seen. Patrick Burns is credited as the arranger for nine of the eleven songs. Every single arrangement doesn't just look at the chords of the song — the little details are noticed as well. These aren't transcriptions done in the two hours before rehearsal. It's a dedicated effort to let every part of the original song shine. I'm incredibly impressed at how much work Burns (and also Tim Carroll and Kerry Johnson) put in to make these songs come to life in a cappella. I just would have loved to see more thought placed into going beyond what exists and looking into what could be.

Of course, this isn't about how close to the originals the tracks on this album are. It's about how well the New Dominions recorded said tracks. I said it earlier that there are no real blemishes in the sound of No Context. The soloists are solid and the recording value is great. The only hang-up I have is originality. By playing with different rhythms, chords, or possibly even tempos, some of the problem sections I have within these tracks might have gone away. When all is said and done, the New Dominions produced an album that's great to listen to, but it lacks enough innovation to be remembered.