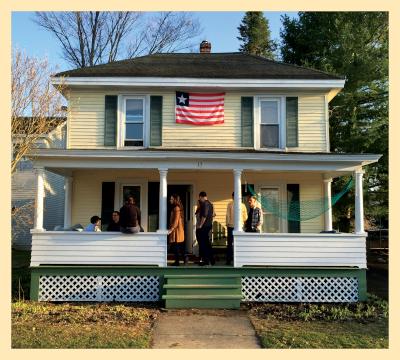 I'm disappointed that 15 College Street is not a step forward for the Colgate Resolutions. The last album that RARB heard from the group, 2013's Skip & Go Naked, was a solid yearbook album: pleasant enough for the group's family and friends, but not a strong impression for the greater a cappella community. 15 College Street continues that sound for the Resos.

15 College Street has an odd track listing. In the liner notes, the group pays tribute to its long history (the album title is a reference to the group's house address) and mentions that "with this album ... we put our unique spin on some of the more memorable songs dating back to the 1950s." Many groups have albums where they dust off old arrangements to pay tribute to their alumni, but that's not exactly what the Resos are doing here: the group was founded in 1992, so these older songs (by Johnny Cash, Elton John, Bob Dylan, and Otis Redding) are likely not the repertoire of the group's founders. All arrangements here except one (Valerie) are written by the group's musical director, David Gildin, so again, these aren't archival arrangements either.

I don't have an issue with the group selecting a bunch of oldies for its album, but the presentation is disjointed: alternating between old and contemporary songs is awkward for a listener, and these songs don't share a theme or a story, so it's hard to get a sense of the group's personality or identity from their song selection. All that would be excusable if these were stellar performances, but they're not. Several of these songs have been overdone to death, and that doesn't help the Resos' cause here: Royals sounds rote and tired, All About That Bass loses any hope of soul or grit with its sweetly angelic leads, and Creep emphasizes every "dit-dit-dit dah-dit-dit-doh-doh" note in the backs and uses soloists who don't seem to feel the song.

I wish the older songs fared better, but they don't. Bennie and the Jets is the most egregious inclusion here (this song should've been cut from the album); its lack of dynamics and note-note-note performance makes it almost unlistenable. Folsom Prison Blues fares slightly better, but again, the heavy presence of the backs basically drowns out Gildin's solo. It's not clear who made some of these mixing decisions (Gildin is listed as a producer, and there are two sound engineers, James Byron Schoen and RARB reviewer Malcolm Piper), but the balance feels off on most of this album.

The one shining moment here is Jen Shelton's warm and heartfelt lead on Make You Feel My Love, but the heavy, drawn-out, and emotionless backs sap any feeling from the song. I want the group to come in with a whisper and use dynamics to build drama here, but it just never happens. On this song and on the rest of 15 College Street, the Resos are singing as though these arrangements were handed to the group without input. I obviously don't know how the group selected these songs, but I just never believed that these are songs that the group is passionate about singing. That's the real missing piece here — singing the right notes is great, but I want to feel what the Resos are feeling, and I want to believe that these nine songs have meaning to these singers. Without any heart and soul, this recording falls flat.

When you review multiple albums by the same group, you become invested in them. You begin to root for them, hoping they've improved upon past mistakes. In the case of 15 College Street by the Colgate Resolutions, I definitely notice a stark contrast from both Skip & Go Naked and No Wounded Soldiers. Is it everything I hoped for? Not quite, but I think the group is finally heading in the right direction.

Let me preface this review by stating, this is an album for those who prefer their a cappella in pure form. You won't find a lot of fancy techniques or cool vocal effects. And after reviewing the Resolutions' previous two albums, I believe this unmasked singing with throwbacks to older generations of a cappella is exactly how they like to do things.

While I prefer that groups of today have more of a modern feel to their work, this style really suits the Resolutions, while also being their Achilles' heel. Let me explain.

On one hand, with songs such as You Go Down Smooth, Folsom Prison Blues, and Make You Feel My Love, simplicity puts both the lead and the accompanying music in the spotlight. The lead gets to be the star without contending against an exuberant amount of layers. And you get to hear backing parts a bit more clearly when you've heard them more than once in a song.

When songs are a bit more traditional, simplicity helps elevate the big standout moments. Bennie and the Jets has that in multiple areas. The song is warm, as if you're in a cabaret listening to it. Couple that with a lead whose top register has a nice timbre and a bridge that features the equivalent of an instrumental break, and you've got gold.

The outlier in all of this comes in the form of Creep. It is hands-down the best track on the album. Production helps it to feel more modern than the other tracks, and the choice of making the arrangement a duet adds a wonderful contrast between the verses. The bridge is also killer with elements of unpredictability in note choices and some really good harmonies.

This album doesn't feel like an album of today. Most of the tracks seems as if they were produced decades ago. All About That Bass and Try a Little Tenderness suffer majorly from this. And while such a production choice can work for themed albums, it isn't the case for the majority of albums today. The Resolutions could also stand to have more production on the vocal percussion, greater evidence of personality instead of straight tones, and better blend.

The Resolutions have definitely upped the quality in comparison to their last albums. If their niche is really more classical-sounding a cappella then 15 College Street is a project that does well to showcase that.

At a glance, 15 College Street looks pretty good on paper. There are the usual offerings of Adele, Lorde, You Go Down Smooth, Valerie, and so on, but there's also Johnny Cash, Radiohead, and Otis Redding!

Things start off well with You Go Down Smooth. There aren't any tricks or surprises here, but it's bouncy and vivacious and gets the job done. Then there's Folsom Prison Blues. It feels like an odd follow-up to the previous song, but it grew on me slightly as it progressed. The slower pace gives it a brighter, almost "oompa-loompa" feel, which seems somewhat out of place, but I appreciate the willingness to try something different.

Royals is strangely quiet, subdued, and thin, almost as if there's too much space between the vocal parts. The "I'll rule"s — which are of course a signature moment in the song — are almost a non-factor. Bennie and the Jets seems to have a similar energy problem. The bounce that should be driving the piece is lacking. The soloist has an interesting tone for the song, but he doesn't sound supported by the rest of music around him. When he increases in volume towards the end, attempting to add some climactic value to the song, the surrounding vocals fail to match his intensity, resulting in a lukewarm conclusion.

The trend seems to continue with All About That Bass and Make You Feel My Love. Fortunately Valerie shows up in time to revive the project. The soloist is agile, nimble, and has a warmth that really suits the song. Creep surprised me, becoming the highlight of the album. It has all the intensity and indulgence that should have been present throughout the entirety of the project. Much like Valerie, this track is driven largely by the performance of its soloists who rise to the challenge to emobdy the song.

There's little to compare between the first half of 15 College Street and the second half. While there are good moments to be had at the end of the project, a large bulk of its guts sounds uninspired and lackluster. While it is apparent that Colgate Resolutions has considerable talent, as evidenced by tracks 1, 7, and 8, there doesn't seem to be a consistent effort to put that talent on display throughout this album.

To order a physical copy of the album, send an e-mail to resolutions@colgate.edu. Tracks from 15 College Street are also available for streaming on SoundCloud, YouTube, and the group's website.