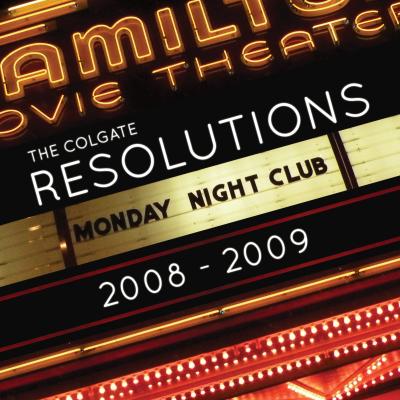 I didn't review the Resolutions' 2006 effort Off The Record, so I can't speak first hand to how far they have or have not come since that effort. But based on the reviews of my RARB colleagues, the bar was rather low.

I also would be lying if I said that the group's emphasis in the liner notes on its "fun-loving nature", how "more than anything, we love to have fun", and how much fun they had recording this album (with the hope that I would have at least as much fun listening to it) didn't leave me with a slight pang of concern over the actual music-making I could hope to hear.

And although this is an album intended to span three years of Resolutions and therefore might be forgiven some dated material, I couldn't help but shudder a little when I noted tracks like Walking on Sunshine, Freedom! '90, Tempted, Where the Streets Have No Name and Every Little Thing She Does Is Magic, which were already overdone around the time I was in college (back in the last century).

Still, if I've learned anything during 11+ years at RARB, it's that surprises come in many shapes, sizes and forms.

Unfortunately, there are no surprises to be found here. Indeed, pretty much all of my initial apprehensions proved well-founded.

To be fair, I don't doubt for a second that Monday Night Club was a labor of love for the Resolutions, the result of many, many hours of hard work and offering the students memories that will last a lifetime.

Sadly, the fruits of their labor are not particularly good a cappella — collegiate or otherwise. Even if one might argue that some tuning variances preserve some sort of "naturalism", the rampant tuning issues here are inexcusable. They become even harder to look upon generously when considering the rudimentary arrangements that dominate the album — more often than not, favoring a unison background block (with the occasional exposed ornamentation). When the group tries for something a bit more complex — the chorus of Every Little Thing She Does Is Magic comes to mind — it's poorly conceived on an arrangement level and then, when sung out of tune, it's even more difficult to take. The vp is circa 1990 with Adam Coccari, James Zegarelli and Mike Goltzman giving it their best but absent an establishing kick drum, a piercing snare of any kind and no credible cymbal sound to speak of, the vp is just a distraction, making me worry about a teenager on the verge of hyperventilation.

And in perhaps the greatest disappointment, the fun that the group had in the recording studio really does not come through. Some of the soloists inject a bit of personality and energy into the proceedings, but during uptempo moments you can almost hear the background block's intense concentration on singing notes and syllables. This in turn gives a lot of the music a plodding, almost mechanical sound that surely is not a reflection of how much the group enjoyed this experience. And in the mellower moments, the singing toes a very fine line between casual/breezy and lazy/sloppy, often ending up on the wrong side of that line.

No doubt there are many collegiate groups out there like the Resolutions, made up of reasonably talented if not excellent singers and a mediocre arranger or two, who love nothing more than getting together once a week or more to sing their favorite pop songs and occasionally performing for family and friends. More power to them. But those family and friends are also the only folks who might really want to pick up this CD.

So 1995 apparently wasn't such a bad year, as the 2008 to 2009 members of the Colgate Resolutions must have thought when the group recorded its recent album Monday Night Club. Except for a couple of songs that weren't even gleams in these singers' eyes during this time, the recording would fit perfectly in line with most of the recordings that were circulating collegiate a cappelladom during that time. Unfortunately, that doesn't bode well for albums released in 2011.

Such is the case with the Resolutions latest. The three generations of performers have created a yearbook album that will bring back fond memories to the alumni decades from now when they are reminiscing about the escapades they pulled off during their collegiate years. But for the general population, things aren't so rosy. Unless you categorize yourself akin to something like a '90s Bruce Willis movie franchise fan, it would take more than a terrorist attack to make you listen to this album.

Now, there is a shining aspect to the album: the producer and the three music directors have managed to create a consistent sound across the three different groups represented. And that's a huge feat. Most groups understand the struggle (and sometimes unbridled joy) that is the task of getting your group to sound the same between semesters. The 35 members of the Resolutions and recording engineer James Schoen were able to make transition happen flawlessly. Kudos.

What needs to be worked on?

Tuning, breath support, recording balance, intonation, creativity, group blend and dynamics, a few stronger arrangements to challenge growth in the singers and the sense of grasping the concept of a tonal center.

But I think the group knows this. Even the liner notes emphasizes the fun-loving nature of the group and the close-knit family spirit. That's exactly what the album sounds like, a group of friends singing around a few microphones to make some memories. Just for the hell of it. And they've succeeded.

When the group is able to get more serious about recording, I think they'll be able to put out a solid project. Until then, I think Monday Night Football is a better option for the a cappella audience.

There is not a lot of excitement running through Monday Night Club. The Colgate Resolutions have produced an album that varies from the mediocre to the flat-out bad, with few glimmering moments in between.

First, the good. The album seems to have been tracked; it doesn't have the typical trappings of "live recorded" albums. Love Song has a nice bounce, and the soloist does a good job of interpreting the song. Apologize's soloist sounds very nice. I appreciated her commitment, despite some tuning issues. I enjoyed the first few moments of Where the Streets Have No Name, though I was eventually bored with the "instrumental" intro. (This is once place where some paring and pruning could have really benefited the album.) Songs like Walking on Sunshine, Every Little Thing She Does Is Magic and Stoppin' The Love have a certain charm to them. The arrangements often display some degree of sophistication, though too often they're hindered by unnecessary and troublesome syllable choices.

Now, the rest. Every song has glaring tuning errors, both in soloists and backgrounds. I don't care if you don't use pitch correction (Hell, I welcome it!), but you've got to nail the tuning if you don't. The guys seem to be holding this group together, as the female parts are often the culprits for poor tuning. Altos are either too bright and nasal or too throaty, and sopranos seem shrill and unsure of many of their pitches. Cutoffs are weak and sloppy, and I've got to say that there's really no excuse for this in a studio recording. VP is nothing to write home about, either: it's often spitty and lacks any real definition. The song choice is uninventive to say the least; there is hardly a song on this album that I haven't heard performed at a significantly higher level. When the group attempts to try something a little different, like the mashup of The Scientist / Fix You, it never quite gets off the ground.

The a cappella community is ever-expanding, and groups when recording should be aware of what they're trying to sell. If you're in the game just to make a yearbook recording for friends and family, this album works just fine; but if you're in the game to sell CDs and make your mark, then you've got to offer something special. Whether it's an awesome and audacious set of originals or a high-octane selection of covers, an album succeeds by achieving a goal. I'm not entirely sure what Monday Night Club is trying to achieve. It sounds like a yearbook album, but it was submitted for review and came in some very professional-looking packaging. The entire album feels half-baked and under-prepared, slapped together and sent out with glaring mistakes.

For future albums, I would recommend that The Colgate Resolutions figure out what its strengths are and focus on them. If you're looking to entertain and do fun covers, make sure they're solid and not riddled with mistakes. There are 14 songs on the album, what if the group had pared it down to six or seven and made sure the songs were of excellent quality? If The Colgate Resolutions are looking to make a good — even great — album, they may want to start a little smaller.

To order this album, email evolygrooser@gmail.com or visit the group's website.