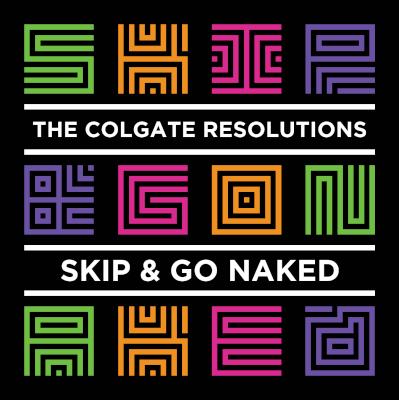 With Skip & Go Naked, the Colgate Resolutions have taken a different approach than their last album, No Wounded Soldiers. At just seven tracks (vs. the sixteen of its predecessor), the group has made a noticeable shift to focus on a shorter list of songs. The result is good but not great; this album is certainly listenable and will be well-received by friends and family, but it just doesn't measure up in the context of recorded a cappella as a whole.

Routinely on Skip & Go Naked, the group and its recording/production team favor notes over phrases (disclaimer: Skip & Go Naked was co-produced by Resos alum and current RARB reveiwer Malcolm Piper). Listeners can pick out the entire soprano line on just about every song (Too Close and I Will Wait are especially egregious), rather than having those high notes add color and texture to the bigger picture. That's either an issue of blend when recording or over-emphasis during mixing; either way, there's too much detail in the finished product, and that takes away from the soloist and the overall mood of each song. The leads on Wildfire and I Want You Back almost get swallowed up by the backs, when in both cases they should be able to cut through and command the spotlight.

Even with this issue, there are some good dynamics here. There's great build and variation in the arrangement for Youth, which makes that song a solid start to the album. The group and arranger/music director Garrett Wilkes have figured out that sometimes the way to force a crescendo is through the arrangement, building each voice part to grow into the song's final section. The choice to make Holocene a group performance (instead of having one soloist) also gives that song a really nice overall feel.

While this listener didn't love the execution of every arrangement, The Resos have made a strong decision to have every song but one arranged (or co-arranged) by Wilkes: this unity of approach and vision goes a long way towards making Skip & Go Naked sound like a cohesive album. As a result, this recording is definitely a step in the right direction for the Resolutions.

The last time I encountered the Colgate Resolutions, I was struggling to find positive critiques for the group's 2012 release No Wounded Soldiers. Fast forward a year later and we've arrived at Skip & Go Naked, a better overall project than what I'd heard previously. While I still believe that The Resos (as they like to be called) have much more potential, this album is more in the realms of what collegiate groups are releasing.

For starters, the album length is more suitable this time around in comparisson to the group's last release No Wounded Soldiers. While seven songs is bordering on the distinction of an EP, I think the shorter amount really works well: it begs the artist to get to the point quicker, which I think The Resos do. Track selection helps here: the chosen songs are more appealing to a younger audience, and fit the young voices in the group.

Youth starts off as a bold statement. This track really aids in persuading the listener to see what else Skip & Go Naked has to offer, and lead Gabby Ambrosio has a wonderful tone to her voice that adds color to the song. I Will Wait is a great pick because of its current, popular appeal. There are a few mixing issues; I wish they would have mixed the lead and bass a bit higher, but the group does a good job in maintaining a solid backing sound.

Seven Nation Army is where you realize that The Resos have progressed beyond their previous efforts. I cannot help but enjoy the somewhat James Bond-esque intro (at least that's how my mind processes it). Parts are mixed better all around, and the lead has a very sultry style that assists the arrangement.

Wildfire, while boasting a pleasant soloist and a natural groove, is fairly simplistic, making it hard to stand out against other tracks. I Want You Back wins the award for the most energetic selection, as Rachel DiSalvo emotes all the energy she can muster into a big lead. And Too Close starts off strong but struggles in keeping interest throughout because of its similar style to arrangements by other groups.

The best part of this album however, comes at the end with Holocene. The energy follows the progression of the song and matches and builds all the way to the end. The harmonies are wonderful and fit the choral style singing. The song is naturally emotive, and the icing on the cake comes as the bass kicks-in towards the end of the track. The Resos are really in the pocket with this type of performance. All around, this is just a beautiful piece.

Skip & Go Naked has better production work, artistic choices, and overall singing than its predecessor. The Resos still have more work to do, but are headed in the right direction.

The Colgate Resolutions' Skip & Go Naked is short and to the point. And after listening to the seven songs, it becomes pretty clear that the group has opted for quality over quantity. Skip & Go Naked boasts great consistency and solo performances that render it a sure crowd-pleasing album that not only plays well start to finish, but also doesn't bore after multiple listens.

Youth is a strong opener that does well to acclimate the listener to the sort of vibe and energy to follow. The soloist is well-chosen with a voice that has character to it without pushing by adding boisterousness to her delivery.

The Resolutions' I Will Wait is pretty much a standard cover: while it'll likely go over well with you, there aren't new bells and whistles added to this rendition.

Seven Nation Army is quite a bit slower than you'd expect, but the slower tempo and jazz-inspired singing from the soloist really works to the Resolutions' advantage here. The blend and dynamics (like the accented "dum"s from the bass) give it this eerie, smoky flavor that puts a great new spin on an old tune.

The Resolutions' Wildfire is a banger and will likely become a fast favorite to listeners of the album. Though it's pretty much a translation from electronic instruments to voice, the Resolutions' version is successful because it keeps the tight rhythmic and electric suaveness of the original song intact. Combining this with an on-point soloist and great percussion yields a solid hit for the Resolutions.

The Resolutions' Holocene is a great adaptation of Bon Iver. It was a smart choice adding their own dynamics to what could have been a slow, quiet bore when translated to a cappella. The Resolutions' version is louder and a touch faster, but does so without sacrificing all of the sincerity and tenderness (replicated in the basses) of the original.

In short, Skip & Go Naked sounds like, and is, a good time.