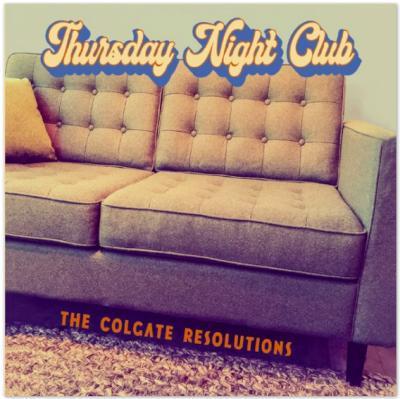 Having the privilege of attending higher education for nearly a decade, I certainly know how to write a paper. While there is some distinctly quality material in Thursday Night Club by The Colgate Resolutions, the album in its current form, from studio quality to some glaring sonic issues, feels more like an early draft than it does a final, completed paper.

Speaking to that quality, in addition to some questionable audibility and panning issues throughout, there is a significant unevenness in some songs that make them feel distinctly unfinished. The refrains in Hotel California suffer from either missing melody lines or filtering that causes solo voices to disappear. Also, there are out-of-tune segments early in Good Kisser, which is difficult enough to listen to in a live album, let alone one that is studio-produced.

The Colgate Resolutions also take their transcription very seriously. It is so extreme that they very literally interpreted The Cranberries' eerie instrumental intro into the starkly different verse and chorus for Linger. However, unlike the original, the group fails to include enough connective tissue of its own to justify what amounts to a significant dropoff in energy and rhythmic activity after the intro. Additionally, the repetition in Hotel California drags out for a full 6:42 with little to no invention, innovation, or reason to not make significant cuts for digesitibility.

The medleys are a good bit perplexing as well: at the outset, the only discernible reason to connect the songs in track two is that their titles feature numbers, and that choice is not justified in the arrangement. 22 (Over Soon) might have received a higher rating from this reviewer as a stand-alone, as it is quite tuneful and complex in its construction. However, the presence of the other songs in the medley is not only burdensome, but inconsistent with that song's overall quality.

Contrast is probably the single most sensitive feature in my album reviews. Dynamics, soundscape variety, and emotional arc are crucial to making a good album great, a great album amazing, and so on. Thursday Night Club feels completely absent of contrast in its 34-minute length, which unfortunately dwarfs most merits contained in the clean sound and excellent production work.

The album starts fine enough with Mother We Share. While the track is super safe and mostly stays at a mezzoforte in dynamics and intensity, there are still no major gaping holes to point out either.

The problem arises when the rest of the album does little to stray from this uniformity. Energy flatlines by the time 22 (Over Soon), 21 Moon Water, 8 (Circle), 00000 Million (Medley) is halfway through its first segment, and little is done to reintroduce momentum through the very end of the album. Missed opportunities are the leading cause of this flatlining. Songs sometimes replace emotionally compelling and intense solo work from their originals with underwhelming group-sing. Arrangements lack parts that exercise the vocal ranges of their singer to create interesting instrumental moments. Interlude and bridge moments in songs will cruise from one section to the next without giving a sense of something new to follow. And sometimes, some singers will attempt to go somewhere interesting in a song, but the rest of the group won't follow them.

To clarify, some of these ideas are not inherently bad, but The Colgate Resolutions fail to sell them to the listener, too. Group-sing isn't a bad thing, but the group-sing used to replace the intense and edgy leads from The Eagles, Bon Iver, and The Beatles neither replicates that edge nor sells me a viable alternative. There are technically moments on Thursday Night Club when dynamics go down to mezzopiano and rarely piano, but the singing intensity level rarely follows suit, and these moments are so seamless with the normal album dynamics that the contrast feels ignored and untapped.

Examples of missed potential can be highlighted on both the best moments of the album and the worst. Believe is easily my favorite song here and it is carried by an impactful solo with some great harmonic movement powering the instrumental. But  while the lead is singing with such contrast and energy, the rest of the group does not follow these changes in emotion at all.

The two medley tracks are where all issues culminate. 22 (Over Soon), 21 Moon Water, 8 (Circle), 00000 Million (Medley) is a compression of fifteen minutes of music into 5:35. Golden Slumbers, Carry that Weight, The End (Medley) is five and a half minutes of music condensed into 4:08. The minutes that were cut are almost entirely the original impactful transitions and uses of incredible dynamic contrasts or emotional shifts. What's left is two medleys that have zero arc and none of the bite or emotional drive from any of the original songs. When covering groups like Bon Iver and The Beatles, both masterful at providing incredible emotional investment to their albums, it is imperative to recapture that arc. This is especially so when performing a medley of several songs from each. To completely sterilize the dynamics, remove all the interesting transitions from the original, and provide no lyrical performance, the ignored potential becomes even more distracting. Both of these medleys would've benefited from a focused vision on fewer songs, or extending the length of each medley to give room for the transitions that make the originals so powerful.

If an album cannot retain momentum past the first couple songs, repeat listens of the entire thing become tiring as well. The path forward for The Colgate Resolutions is to capture more emotional bite wherever it lay untapped. If a covered song contains moments and qualities that made them desirable to sing in the first place, it is the duty of the arranger and group singing to not let those virtues be ignored.

In a word, Thursday Night Club sounds uneven. In genre, arrangement, tone, and musicality, the album feels disjunct, a criticism also leveled by reviewers in 2016 with the group's 15 College Street. I offer these remarks so that future iterations of the group can build on the good moments and fix the rough patches.

While the harmonies mostly line up and the rhythms are synchronized, overall the performances lack musicality, the direction, dynamics, lyrical emphasis, and articulation that give a song vitality. For example, Good Kisser seems to maintain one level of dynamics and energy for the entire track. This sound may stem from the stiffness of trying to record the perfect take. The production work also gives the tracks a technological aura, but I suspect their astute editing creates the pitch-perfect chords we hear with the added aural sheen as a consequence.

The Resolutions' overall tone does not blend either: individual sections possess their own timbre but do not cohere into a group sound, often due to inconsistent vowels. Take, for instance, the group's cover of Alison by Elvis Costello. The round, resonant bass section should meet in the middle with the flutier soprano part, which could be at least partially achieved by agreeing on vowel shapes. In contrast, Linger's upper background parts, particularly in the first half, demonstrate the group's ability to create a more unified sound. Mother We Share also has a pleasing bright timbre across the sections.

Nowhere is the lack of blend on display more than in Hotel California. While songs with many individual soloists are fun, employing entire sections to solo together and switching often between which sections are featured results in very unbalanced dynamics in the first half of the track between the fore- and background. However, the group does an admirable job of recreating The Eagles' guitar solos in the final two-and-a-half minutes of instrumental fill.

Both of the medleys seem out of place: I don't know why these songs go together beyond superficial topics in common (songs titled with numbers and lesser-known songs by the Beatles). Successful medleys reveal something about the songs or genre or theme in question or create something more than the sum of their parts. The melancholy and dreamy first medley runs together such that I cannot distinguish the songs and have no sense of direction, partly due to the imprecise diction that muddles word comprehension. In contrast, the three Beatles songs feel spliced together, as if someone cut the tape from three different recordings without any cohesive musical element or theme.

To end this review on a high note, though: Believe goes beyond a simplistic, emulatory arrangement to add additional lyrics, include some dissonant chords, and craft a strong arc. Moreover, it showcases the best blend of the album, anchored by a capable soloist and steady vocal percussion. As The Resolutions continue to sing and grow together, Believe should be a musical north star for their future endeavors.