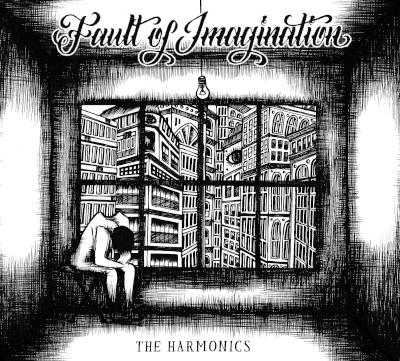 Sometimes you have to immerse yourself in the music to truly acknowledge the nuances of the tracks and the foibles of the musicians that attempt the art of a cappella. And total immersion is advised, no required, to begin to appreciate the concept behind the Stanford Harmonics's album Fault of Imagination. And while I can't even begin to attempt to say that I understand it, the act of experiencing it has been a real testament of faith and exploration — a fault of imagination indeed.

When I first listened to it several months ago, I really didn't like the recording. It seemed really amateurish in construction, execution, and production. I wondered what happened to the Harmonics of the The Sound of Silence/Escape Velocity era when Charlie Forkish was at the helm of music-making for the group. This ain't them. And it shouldn't be.

What this current group has created is something a bit more singular in its artistry. Fault of Imagination is bleak in all senses of the word. The subject matter of all of the tracks stays in this mildly angsty milieu. Sort of like a pairing of Panic! At The Disco with Morrissey and Sinead O'Connor (Resistance). Yeah, like that. A lot of virtual gnashing of the teeth and beating of the chest like Harry Potter facing a Death Eater (seriously, the triple R front end of the album: Raised by Wolves, Renegades, and Ripe and Ruin). Honestly, in the right mood, it's a lot of fun to listen to. I wasn't, and then I was, and I'm glad that I made that transition.

There isn't a lot to say musically. The members of the Harmonics are still great performers even if this crop doesn't have extremely memorable soloists. Balance and blend is often impeccable. The arrangements are never excessive; they do what they were designed to do. Production keeps everything cold and alienating. I mean, the overall concept of this album is brilliant.

The major problems with the album are HUGE, though. One. Prince songs. MAKE<clap>SURE<clap>YOU<clap>KNOW<clap>THE<clap>DAMN<clap>LYRICS! Nowhere in When Doves Cry does Prince ever sing "This is what it FEELS like". NO. WHERE. That would have been made clear had the arrangers looked at the source material, maybe? Oh wait, that probably didn't happen because none of the source material is mentioned in the liner notes. In fact, there are barely any liner notes other than what I guess is Originally Performed By in parentheses. Not cool.

And I close with a prime example of the bleakness and simplicity of Fault of Imagination: The Harmonics have a new album. Listen to it.

Fault of Imagination has an I'm-a-prisoner-of-my-own-mind concept going on, with bursts of animalistic growling here and there to let us know unsteady cerebral conditions have peaked with this iteration of the Harmonics.

Every Harmonics album has that one song that makes a cappella fans go bananas. It's an early projection, but I think history will hold on to this rendition of Kings, which keeps that absolutely signature booming Harmonics sound paired with controlled, beautiful aggression. We've heard this approach before (The Memory Remains from Shadowplay being the prime example). I'm great with hearing it again. We get more classic Harmonics bookended in the opener, Raised by Wolves, which has a feisty punk-ish lead with beautiful choir backgrounds juxtaposed over that harsher front soundscape. The Harmonics have relied on this "gorgeous backs meeting a rougher front" technique for as long as I've been listening to them. I'm great with hearing it again.

If I'm repeating myself, it's because the Harmonics keep performing the same type of material with the same arranging and engineering approaches year after year. This, however, is what makes me a Harmonics fan; I love knowing their story and sound is a continuum. You, however, may be itching for something more novel or daring, or simply different. Not everything here succeeds from the Harmonics's playbook, however. Giving Renegades a crowd-infused chatter intro with a generally spooky vibe can't make up for the incessantly plodding tempo that is relentlessly too slow and begs for variation. I also can't figure out why Cabin Down Below made the cut on this release; the auto-tuning gloss is too much on this one, and the source material is dangerously country-bumpkin-ish for a Harmonics piece.

Much more fits snugly into this group's world. Ripe and Ruin is a poetic interlude song with lots of vocal and wordplay, largely penned on parallel voicing with no vp that'll remind (slightly older) a cappella fans of the popular Imogen Heap song Hide and Seek. The arrangement for Instant Crush is cleverly complicated with mini-movements within. And When Doves Cry is a reinvention that really, really works, performed more lyrically with swelling dynamics up front before a sudden shift for intensity.

I like Fault of Imagination because I like the Harmonics. Though I do not feel anything here is as excellent as prior releases, in large part because the general vocal tone doesn't sound as mature and developed with this particular ensemble. Still, I'll keep listening to whatever this group records.

What gives the Harmonics so much staying power in the a cappella community is their ability to constantly stay on the forward-thinking end of the spectrum. This mixed ensemble from Stanford University has a way of fusing a cutting-edge sound into its signature progressive rock style, and its felt quite heavily in the group's latest release, Fault of Imagination.

Fair warning, this album is laden with processed vocals and percussion, but the Harmonics present it all in a tasteful way.

Raised by Wolves opens the album with vigor and intensity as pounding drums and aggressive backing vocals drive the entire ride. Imagine a crossbreed between Fall Out Boy and Linkin Park, as the Harmonics deliver a spirited track that gets the blood pumping.

What follows demonstrates both the group's creativity and effortless ability to rock. The use of ambient and unorthodox percussive sounds in Renegades is praiseworthy as it sets the tone for the song, which is both primal and assertive. Both the lead and backing group offer passionate, animated vocals that last long past the song's close. Ripe and Ruin, while short, demonstrates the Harmonics's knack for complementing an artistic arrangement with the latest tools and tricks in studio recording.

This Place is a Prison showcases the progressive nature of the Harmonics. The experimental rock piece is a steadily evolving track where various vocal layers are constantly being incorporated. The song's lack of a particular structure keeps the listener hooked, leaving you anxiously awaiting the next musical movement.

Daft Punk's synthpop hit Instant Crush is right in the group's wheelhouse with the song's musical effects. While the song works stylistically for the group, some of the transitioning chords feel a bit off. The departure from straight rock covers is commendable, but pitch accuracy is something the group must be cautious of. Cabin Down Below has it all: groovy vibe, well-placed group harmonies, a solid key change, and a BIG sound that's just fun to experience. Resistance stays true to the original with dynamic percussion and a lead who can really command a rock solo.

When Doves Cry is what a cappella dreams are made of. The arrangement will catch you by surprise with its steadily shifting melody, the inclusion of a haunting duet, and the style switch which occurs halfway through. Prince gets a hard rock facelift with plenty of sustained power notes and intense emotive singing that will leave you absolutely floored.

The Harmonics end in the same manner in which they begin, with force. Kings takes you through the vocal trenches full of low-end rumbling and angry, yet controlled, power singing. It's an aggressive march to the finish line that will have you wanting to experience it all again.

Fault of Imagination has all of the nuances of what a good rock album today should include: inventive arranging, passionate vocal lines, and a killer rhythm section that will revitalize your love for bold and upbeat music. It is music with a purpose.