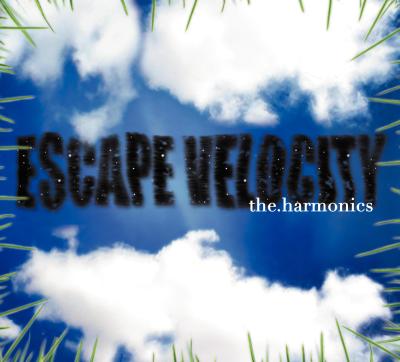 The Harmonics stick to their playbook with their latest release, Escape Velocity: ultra-high energy, glossy production, excellent arrangements, and average singing. The result is another well-received album that is enjoyable to listen to, but not yet 100% there.

In many ways, the Harmonics are off the charts. Their energy is astounding, incessantly driving throughout the entire fifty minutes of music. From the edgy opening of Battle Without Honor or Humanity, to the brilliant The Sound of Silence, energy never flags.

Also impressive is the musical creativity of Escape Velocity. The track list is a bold. Where else can you find the Scissor Sisters' version of Comfortably Numb, or an a cappella Rhapsody In Blue? Two standouts are a wonderful melding of John Lennon and Willy Wonka in captivating Imagination, and Charlie Forkish's superb reinvention of The Sound of Silence. Even standard fare, such as Soul Meets Body, has excellent arranging. I found the variety of material a bit too scattered for my taste, but I still have to admire the vision.

The Harmonics have cultivated a long-standing relationship with über-producer Bill Hare, and it shows in the quality of the production. Every note is honed to a fine edge, and effects are ubiquitous but well placed. Percussion is another strong point, with a wide range of percussive sounds pushing the album forward. Everything is slick and glossy, which works on modern fare like Hoobastank, The Servant, and Disturbed, but I found it a bit strange for Gershwin.

Yet throughout I couldn't help but notice the mediocre singing. Tuning is spot on, but clearly helped out by studio wizardry. The album is mostly solo, percussion, and bass with the block pressed well into the background. When backing parts do come out, the poor vocal technique is clear: spread vowels, lack of support, swoopy, nasal, breathy in the men, mousy and overly trebled in the women. Baris and tenors are still mostly absent. The Harmonics have mastered short, percussive, and punchy singings, but sound disinterested and unsure during sustained notes. Soloists fare little better. I found this especially frustrating since I've mentioned it in my past two reviews, and it's only gotten worse. The Harmonics (and Hare) do an excellent job compensating for their vocal shortcomings with their arrangements and percussion, but I'm still not completely won over.

Still, Escape Velocity is a fun listen, full of interesting arrangements and energetic performances. This is more than I can say for most collegiate albums I hear. I suspect that's why many of us listen to a cappella: not for the technical proficiency, but for the sheer joy. If that's the case, Escape Velocity is a sure winner.

You could argue collegiate a cappella was awaiting its monolith. The art of mimicry and faithful recreation is not without merit, and its practice had yielded some intriguing results. But it has become a boutique in the mega-mall of great musical ideas, the quintessential niche.

Niche, meet Escape Velocity. Parsing the sheer volume of brilliant choices observed on this album is a daunting task. Escape Velocity is an audacious gob of unity, innovation, and musicality.

Ask yourself this. When was the last time you heard a contemporary collegiate album that didn't feature anything resembling a lead vocal until the fourth track? In a heroic act of ego sublimation and vision, the Harmonics invest a full ten minutes establishing themselves before offering up an honest-to-goodness soloist on Cells.

In the interim, they treat us to high-octane covers of Battle Without Honor or Humanity and Get Set. They set the table for the album's first course, a pitch-perfect, sneering evocation of Pink Floyd's Comfortably Numb (à la Scissor Sisters). The wink-wink marriage of sampling to a cheerleader's chorus of "hellos" sustains a dizzying build until all hell breaks loose in a seven-layer disco dip. That they are able to make sense of this trifling cover is an achievement. That they are able to make a statement with it, a triumph.

If Escape Velocity had me at "hellos", it floored me with Imagination. The Orwellian deconstruction of A Perfect Circle's droning piano line syllable suppresses any potential juvenile giggles provoked by the ballsy syllable choice. This ironic de-sexualization offers commentary on Lennon's (and Wonka's) hopeful sounding, but ultimately nihilistic originals. This is a cappella as post-modernism, a factory from which neither sex nor candy shall escape. Imagine there's no Everlasting Gobstoppers.

I could go on and on. The Whisper cover checks (some of) the arranging pyrotechnics at the door to deliver a brooding background that allows Brittney Vasquez's stellar solo to shine through. Most groups try to power through all things emo (and certainly all things Evanescence), leaving their soloists to shout along, hoping their lungs don't fail them. Together with Erica Lozoya's assertive take on Dream for the Moment, the Harmonics prove that the lack of leads is a creative choice, not a compensatory necessity.

Producer Bill Hare deserves special credit for bringing such an ambitious project to life. Where his past projects have suffered from a measure of conformity (albeit to a standard partly of his own making), Hare's work is notable here as much for what it doesn't do. He is unafraid of silences. Of grunts and whirls and visceral music-making.

All of the above is on display in the album's ultimate track, a cover of The Sound of Silence. Which: damn.

To the group, I would offer a couple small caveats. The Hoobastank cover might be fun in a vacuum, but seems amateurish and out of place on an album of this caliber. The Sound of Silence, for all its virtuous kitchen-sinkiness, hints at a possible tilt toward indulgence. Careful not to tear the envelope. You need it to deliver the goods.

But deliver it does. Escape Velocity is a masterpiece of the niche, of the genre, and in its own right, a revision of expectations. It's Foster Street (Tufts Beelzebubs). It's Where's The Band? Hell, it might as well be Who's Next. It's the best collegiate a cappella recording I have heard in a long, long time.

My thoughts during my first listen to Escape Velocity went something like this: "Hey this is pretty good"… "Wow, I'm impressed"… "I really like this album"… "OK, I'm giving it a 5, now all I need to do is figure out what I should write in my review."

After thinking about what to write in my review for a while, I have to agree with this quote from Deke Sharon that I found on the Harmonics' website: "[Escape Velocity is the] most ambitious album of the year." It's certainly the most ambitious one I've heard this year, and I'm talking the past twelve months since becoming a RARB reviewer, not just the first quarter of 2009. Moreover, the album succeeds in its ambitions nearly flawlessly.

Apparently I am not alone in that assessment, because Escape Velocity has collected a dizzying number of awards and honors. The album itself won the Best Mixed Collegiate Album CARA. Cells was chosen for Sing IV. Soul Meets Body was chosen for Voices Only 2007; Can I Buy You a Drink for Voices Only 2008. Imagination was a runner-up for the Best Mixed Collegiate Arrangement CARA (it was beaten out by The Sound of Silence, which also won the Best Mixed Collegiate Song and was selected for Sing V and BOCA 2009). Group member Charlie Forkish was the arranger for both Imagination and The Sound of Silence. I should point out that my first few listens to the album came before I knew any of this, so I don't believe any of my positive opinions were colored by others.

On this album, the Harmonics have gone mainly for a rock band sound. Most tracks feature basses that mimic electric basses/electric guitars (with no words), along with prominent vocal percussion. The melody is usually carried by the highest voices. The soloists were good, but only on two of the tracks (Whisper and The Sound of Silence) did they make me sit up and take notice. Middle voices typically sing words, and frequently have a counterpoint to the melody. Sound effects come and go fast and frequently. The hands of the producers are very noticeable on nearly every track (credit is given to Charlie Forkish and Bill Hare), but generally in a very artful and tasteful way. The production is marked enough, however, that I found myself wondering what the group would sound like singing these songs live. In most cases, I simply couldn't picture it.

Great care was taken in song choice and placement on this album. For example, the first "instrumental" track leads very nicely into Get Set. I'm Alive is among the louder songs; a nice contrast is formed as the subdued "clarinet" solo opens the next track, Rhapsody In Blue. Rhapsody In Blue, in turn, segues very nicely into an instrumental opening section of Whisper. Details like that give Escape Velocity the feel of a true rock album.

Some songs are too long and repetitive, and call for the singers to be too shouty at times. Get Set suffers from this, as do Soul Meets Body and I'm Alive. The arrangement of Imagination doesn't work for me — the variation on John Lennon's song (same lyrics, different melody) was fine, but combining it with Pure Imagination from Willy Wonka and the Chocolate Factory feels very strange as the styles of the two songs don't match at all.

On to the CARA award-winning arrangement of The Sound of Silence: this is unlike any other arrangement of the song that I have ever heard. Pardon me while I describe it in some detail. The song starts off with mostly random sounds, perhaps reminiscent of the wind in a forest. Pitches match and un-match. This goes on for a full minute and a half! Then a soft female soloist comes in and is soon joined by a female duet part. Vocal percussion is quietly added, along with other background parts, and then the song is into full swing. As with Imagination, Charlie Forkish has adjusted the melody a bit from the original, while keeping similar phrasing. The voices continue to sing softly (albeit with a brief detour) until full volume is reached three minutes into the song, with the group's typical rock/electric guitar/vocal percussion sound. This only lasts for a bit, though, until the soft female soloist comes in again. Heading down the homestretch, there are a couple of sections where "sound of silence" is repeated in kind of a two-part cannon, surrounding what feels like the climax of the song, "the words of the prophets are written on the subway walls". Volume is increasing the whole way, and then an abrupt silence ends the piece at 5:30. My first reaction was, "Boy, that was kind of weird. I'm not sure if I liked that." My reaction after listening to it a second time was, "I guess I do kind of like it." I am now probably up to my tenth listen; my current reaction is simply: "This is genius", and I don't use that word lightly. The CARA is well-deserved.

I've gone on long enough, so let me conclude. In short, if you are in the market for a very original a cappella album with a rock feel, you can't miss with this one.