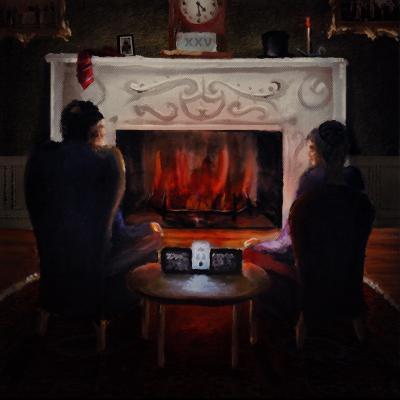 The Dear Abbeys have been around for a quarter-century, a feat that the group mentions in passing in the liner notes for its new album, Songs For Mary Todd. This album is definitely not an anniversary album; other than a few throwback songs (which themselves are newly-arranged), the tracks presented here are modern and current — a wise choice for this all-male group.

Throughout Songs For Mary Todd, the group is present on every song. That may not seem like much, but it is: the leads are committed, the backs are present, and listeners get the sense that the singers are engaged in every phrase of every song here. That goes a long way toward increasing the listenability of the album: it's much easier to listen to an album when it sounds like the performers want to be performing it.

But the engagement from the group in these songs hides some of the flaws here. Several of the arrangements on this album are a bit same-y — Tennessee Whiskey, Sinner Like You, and All in Love Is Fair in particular get a bit repetitive. It's something that one might not notice initially because the group's energy keeps the momentum going, but either some complexity/variation in the arrangements or more dramatic dynamics would've gone a long way toward making these songs feel more lively.

There are still some memorable moments on Songs For Mary Todd. There are lovely dynamics and phrasing on Yesterday, and Amnesia is an engaging performance despite it being the longest track on the album (Todd Reiss's solo and Brady Moses's percussion are on-point here), so the Dear Abbeys are certainly capable of delivering arrangements that move due to more than just the singers' own energy. And I love that on three songs, the Dear Abbeys pick originally female-led songs (...Baby One More Time, Dangerous Woman, and Chasing Twisters); it's an unusual choice for an all-male group, but the versions here really pay off, especially Chasing Twisters.

Overall, the Dear Abbeys are having fun here, which isn't always easy to capture on tape. I just wish that they'd found a few more ways to add complexity to their arrangements or dynamics to their performances to make these songs even more engaging.

The Dear Abbeys from Boston University have a long history in the collegiate a cappella canon and Songs For Mary Todd stands as a celebration of the group's 25th year. Where the group took some chances and made some bold, energetic choices in its last release, Eleven to One, the latest album is considerably more safe, with the occasional ear-grabbing moment. With some production missteps and a general malaise cast over a number of its tracks, Songs For Mary Todd is a nice yearbook album but far from the group's magnum opus.

There are some tracks that stand out and show great potential within the group: Sinner Like You features an impassioned and gritty solo by Nicholas Griggs-Drane; Chasing Twisters employs some strong vocal percussion by Kenji Güldner and the best dynamic contrast the album has to offer; and All in Love Is Fair elicits some of the group's strongest background vocals as part of Johnny Corson's solid arrangement.

The Vocal Company has built a wide network through the a cappella community and has a strong reputation with a large body of work. The album credits TVC with recording, editing, mixing, and arrangement edits, and it's here that I believe the company has a rare misstep. Throughout the album, there are gratuitous reverb effects that don't always seem necessary. In the case of the purposely bare All in Love Is Fair, the intonation toward the beginning is less than perfect, tarnishing an otherwise stellar track. Additionally, many of the tracks become monochromatic dynamically, as there is no strong difference or percussive punctuation between verse and chorus. This causes songs like Tennessee Whiskey, From Eden, Sex on Fire, and ...Baby One More Time to drag considerably. While the group certainly is not absolved for energy and dynamic contrast on its own, many of the elements that bring the album down could have been fixed through the editing process.

It behooves me to make a point about song selection. I have great respect for all-male groups that can effectively re-purpose a song originally performed by a female soloist and vice versa (see also: my affinity for all-male covers of Sara Bareilles songs). But such an endeavor must be handled very carefully: even without changing much of the background rhythmically or harmonically, consideration of key is paramount to success in this area. Dangerous Woman and ...Baby One More Time are set so low in the soloists' voices that there is little hope for excitement to come through their interpretation because, quite simply, middle-range and high-range notes are not created equal. Independent of any other issues in these tracks, there appears to be a great deal of missed potential in both solos simply because the key was too low to do much with either.

As an alumnus of two groups approaching their 20th anniversary, I wish to congratulate the Dear Abbeys on their 25th. May the next 25 years be filled with more growth, music-making, and memories.

The last time I listened to (and reviewed) a Dear Abbeys album seems like just yesterday. Eleven to One was a promising EP and I enjoyed the entirety of it. I was hoping Songs For Mary Todd's lineup matched that level. As a recorded a cappella album, it does not impress much, but after quite a few rewinds I learned to appreciate it.

First, it's interesting that Dangerous Woman is sung with lyrics as-is by an all-male a cappella group — I think it might be a good humorous skit when performed live in front of an audience. Arrangement-wise, I enjoy the simple approach since the song is rhythmically challenging to execute and the group manages to pull it off effortlessly. Next, Tennessee Whiskey is cleverly positioned after a similar rhythmic pattern to the previous track. It's a smooth, feel-good piece that unfortunately becomes tiring after a few rewinds due to its repetitive nature. Soloists Brady Moses and Matthew Vera sound good individually, but their vocal chemistry did not fuse well during the peak of the song.

The fun begins with Chasing Twisters where vocal percussionist Kenji Guldner's skills are showcased. There's so much to love in this track, especially the grit and energy of the singers, and that includes Alex Miller's solo performance. Amnesia, Sinner Like You, and Sex on Fire are tracks that are equally as energy-infused as Chasing Twisters. These are tracks that I don't mind listening to all day. The doubled lower octave bass and the vp's team-up adds to the groove which is essential to the mix.

All in Love Is Fair is one of my favorite slower tracks in this album. I like the buildup of the song as it swells into a majestic climax and tops it off with a relaxing denouement. That's how emotionally engaging songs are performed — shot like a projectile directly to the listeners' heart. Next, the Britney Spears hit ...Baby One More Time is already good as is and reimagining it requires reaching the high expectations of a '90s kid who loved and embraced the original version. In other words, I feel like it's not the best version of the song but as far as innovation is concerned, it's worth the try. Lastly, it seems like the reverb effect of Yesterday takes the listeners to a different aural experience — a cathedral or akin — all I know is that I had to disconnect it from the previous tracks to enjoy its separate theme.

Songs For Mary Todd is quite a mix of tracks and it needs some markers for listeners to understand if there's a central theme or not. As an album, it's pretty average with just a few tracks that are quite okay. Some soloists do a good job at interpreting the covers while others need to focus more on performing and owning their lyrics as if it all really means something to them.

I'll definitely keep a few favorite songs here in my private list, but I'm still hoping for the best album from the Dear Abbeys — this one is not it yet.